“We are beginning early what we’re supposed to do next autumn,” said Cmdr. Marc, the French airwing commander aboard George H.W. Bush. Citing security concerns, French Navy officials asked to be identified using first names only. “That’s a great to start for us and being really ready to start again with Charles de Gaul next autumn.”

Charles de Gaulle is France’s only carrier with catapults and arresting wires. Unlike in the U.S., which currently has 11 such carriers, when France’s sole carrier is in the shipyard, French aircrews do not have another platform to operate from. If the French sailors had not come to train and perform carrier qualifications in the U.S., Cmdr. Marc said Charles de Gaulle would require many more months of training and exercises before being ready for combat missions.

Charles de Gaulle last deployed to the Eastern Mediterranean in 2016. When that deployment ended, the carrier entered the yard for an 18-month maintenance period, which is expected to be completed this summer, Cmdr. Marc said.

During past deployments, Charles de Gaulle has played an integral role in the fight against ISIS in Syria and Iraq. For several months in 2015 and 2016, during a lull in U.S. carrier operations in the Middle East, Charles de Gaulle led the allied strikes against ISIS targets in the region and served as the command element for U.S. Naval Forces Central Command’s Task Force 50 – the first time a non-U.S. ship has served as a Task Force commander.

Having Charles de Gaulle return to service will offer military planners in the U.S. more options when considering where to send ships and when, said Rear Adm. Stephen Evans, the commander of the George H.W. Bush Carrier Strike Group (CSG-2). Evans is aboard George H.W. Bush for the joint French and U.S. operation.

“Navy to navy, it strengthens the alliance together, it strengthens for me, as a strike group commander, to be able to have the confidence that we can integrate with our French allies at sea with any mission we’re assigned,” Evans said. 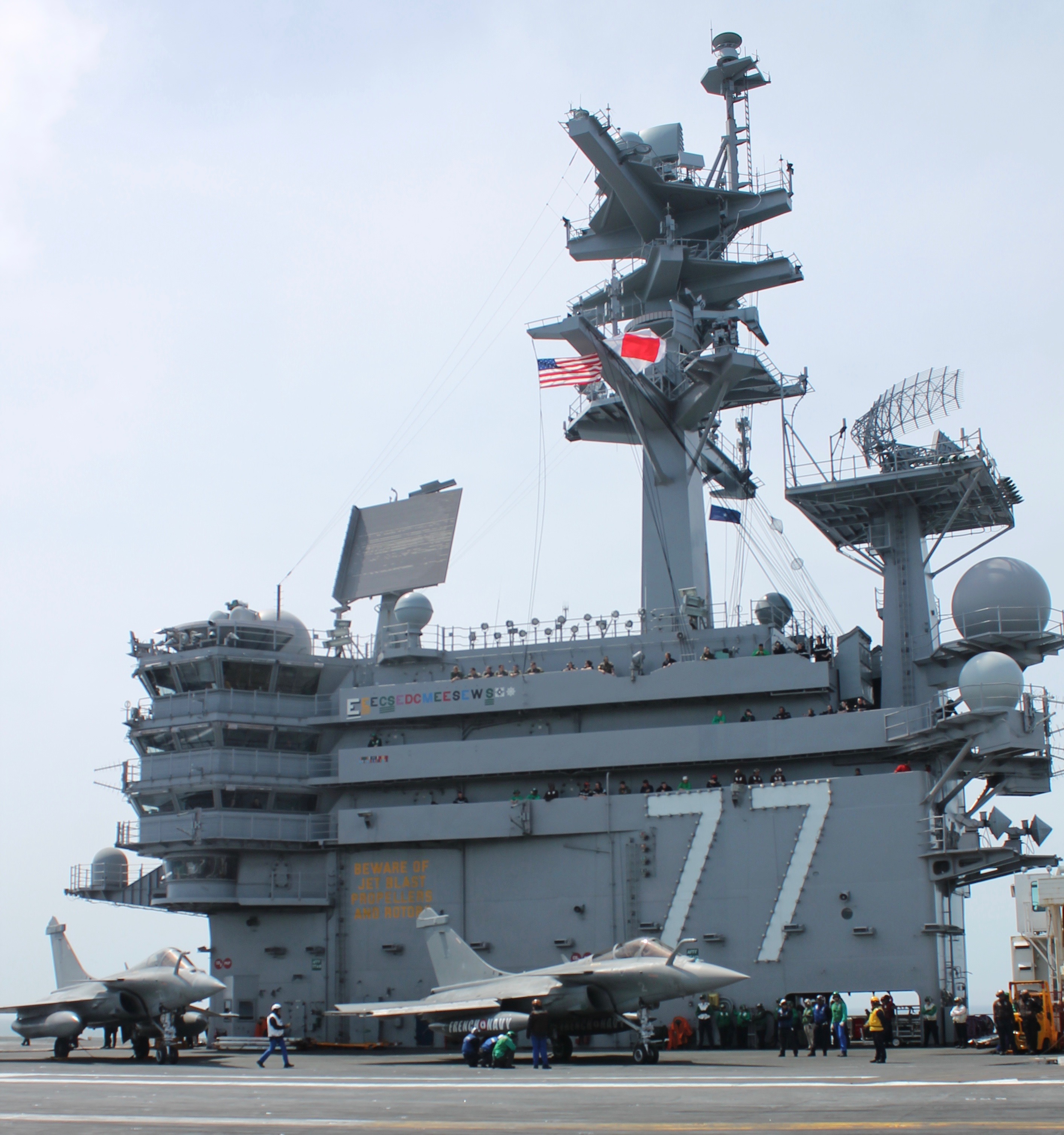 “They’re used to operating off a carrier that’s very similar to the George H.W. Bush. They’re very used to catapults, very used to arresting gear, very used to procedures on the flight deck. Our airborne procedures are slightly different, but they’ve had time to practice that and prepare for that.” Bailey said.

The French and U.S. crews did have to work out some operational issues to fully integrate the French aircraft into the George H.W. Bush’s operation, Bailey said. But these issues mostly involved how to handle an unfamiliar aircraft onboard.

“We had to do a little bit of integration on just on how our guys handle their aircraft on the deck, how we taxi them around, how we control them, some of the launch procures on the catapult,” Bailey said. “Aside from that it’s just like having just another US squadron on board.”

For example, Rafale fighters sit on deck at a slight angle, causing their engines to point down toward the deck. This created potential hazard for U.S. personnel working on the flight deck, said Cmdr. Marc. U.S. crews are used to being able to simply duck under the exhaust nozzles when F/A-18F Super Hornets and EA-18G Growlers are maneuvered around the deck because these jets sit flat on the flight deck and their engines point straight back.

Some other differences between the Rafale and the Super Hornet have led to a slightly different pace of movement on the flight deck during aircraft launches, Lt. Cmdr. Winston Cotterell, Bush‘s aircraft handling officer, told reporters.

First, he said, the French aircrew tend to want to do all maintenance in the hangar bay instead of up on the flight deck, where U.S. crews conduct some smaller maintenance activities.

“I’ve run a lot of elevators just for those aircraft,” Cotterell joked, but said that ultimately the French have similar maintenance procedures and prioritize maintenance and readiness of the aircraft, even if they prefer to conduct the work inside the ship.

Additionally, Cotterell said, the flight deck crews have to exchange the spreaders – the clip inside the catapult system that connects to the aircraft – between launching the Rafales and the Super Hornets or Growlers.

“The Rafale takes a different type of spreader that needs to go on our catapults to make them launch off the bow. The (U.S. and French) E-2s are the same, so that’s pretty much seamless, but the Rafales take a little bit of time … maybe a few minutes, a minute or two here and there,” the handler said. After a few days of integrated air wing operations at sea, he said the deck crew has been able to swap the spreaders in about a minute during the daytime, though at night in the extreme dark it takes several minutes to ensure personnel are safe and to ensure the spreaders are clipped in tightly enough to securely launch the next aircraft.

Between having to swap the spreaders and some French procedures, such as not allowing hot aircraft to be towed on the flight deck, Cotterell said it takes a few more minutes to conduct a full launch cycle, but he said he and his crew are learning a lot and enjoying the experience of working with their French counterparts.

“We operate alongside the French in a number of different theaters, but I think this will contribute a lot to us being able to understand their operations when we’re working side-by-side,” Bailey said of Chesapeake 2018.