The U.S. Navy’s Secret Counter-Stealth Weapon Could Be Hiding in Plain Sight 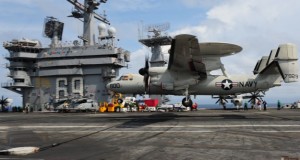 The key to that capability is the aircraft’s powerful UHF-band hybrid mechanical/electronically-scanned AN/APY-9 radar built by Lockheed Martin. Both friend and foe alike have touted UHF radars as an effective countermeasure to stealth technology.

One example of that is a paper prepared by Arend Westra that appeared in the National Defense University’s Joint Forces Quarterly academic journal in the 4th quarter issue of 2009.

“It is the physics of longer wavelength and resonance that enables VHF and UHF radar to detect stealth aircraft,” Westra wrote in his article titled Radar vs. Stealth.

UHF-band radars operate at frequencies between 300MHz and 1GHz, which results in wavelengths that are between 10 centimeters and one meter long.

Typically, due to the physical characteristics of fighter-sized stealth aircraft, they must be optimized to defeat higher frequencies in the Ka, Ku, X, C and parts of the S-bands.

Effectively what that means is that small stealth aircraft that do not have the size or weight allowances for two feet or more of radar absorbent material coatings on every surface are forced to make trades as to which frequency bands they are optimized for.

That would include aircraft like the Chengdu J-20, Shenyang J-31, Sukhoi PAK-FA and indeed the United States’ own Lockheed Martin F-22 Raptor and tri-service F-35 Joint Strike Fighter.

Only very large stealth aircraft without protruding empennage surfaces — like the Northrop Grumman B-2 Spirit or the forthcoming Long Range Strike-Bomber — can meet the requirement for geometrical optics regime scattering.

“You can’t be everywhere at once on a fighter-sized aircraft,” one source told USNI News earlier in the year.

However, as Westra and many other sources point out, UHF and VHF-band radars have historically had some major drawbacks. “Poor resolution in angle and range, however, has historically prevented these radars from providing accurate targeting and fire control,” Westra wrote.

Northrop Grumman and Lockheed Martin appear to have overcome the traditional limitations of UHF-band radars in the APY-9 by applying a combination of advanced electronic scanning capability together with enormous digital computing power in the form of space/time adaptive processing. The Navy would not directly address the issue, but service officials did say the APY-9 provides a massive increase in performance over the E-2C Hawkeye 2000’s radar.

“The modern technology of the APY-9 radar provides a substantial improvement in performance over the E-2C’s APS-145 radar whose heritage dates back to the 1970s.”

But the Navy openly talks about the E-2D’s role as the central node of its Naval Integrated Fire Control-Counter Air (NIFC-CA) (pronounced: nifk-kah) construct to defeat enemy air and missile threats—Rear Adm. Mike Manazir, the Navy’s director of air warfare, described the concept in detail to USNI News last December.

Under the NIFC-CA ‘From the Air’ (FTA) construct, the APY-9 radar can act as a sensor to cue Raytheon AIM-120 AMRAAM air-to-air missiles for Boeing F/A-18E/F Super Hornets fighters via the Link-16 datalink.

Additionally, the APY-9 also acts as a sensor to guide Standard SM-6 missiles launched from Aegis cruisers and destroyers against targets located beyond the ships’ SPY-1 radars’ horizon via the Cooperative Engagement Capability datalink under the NIFC-CA ‘From the Sea’ (FTS) construct. And thus far, all live-fire NIFC-CA missile shots have been successful.

The first increment of NIFC-CA is set to be fielded later this year when the first E-2D squadron, VAW-125, is set to declare initial operating capability in October 2014. NIFC-CA will be declared operational concurrently with that squadron.

The APY-9 is a unique design in many respects, NAVAIR and Northrop brag that the radar is a “two-generation leap” over the APS-145 in an information booklet the service has been distributing. While externally the radar appears to be no different than the purely mechanically-scanned AN/APS-145—also built by Lockheed Martin–internally it is an another matter entirely.

While the APY-9 does rotate inside the E-2D’s dish-shaped radome to achieve 360-degree coverage, the crew of the aircraft can control the antenna rotation speed to focus on an area of interest according to NAVAIR. Further, the 18-channel passive phased-array ADS-18 antenna has the ability to steer its radar beam electronically. It also incorporates an electronically-scanned identification friend or foe system.

Advanced Airborne Early Warning Surveillance is the normal operating mode for the radar to provide uniform 360-degree, simultaneous air and surface coverage with long-range detection of low radar cross-section targets. The antenna rotates 360 degrees every ten seconds or so when it is operating in this primarily mechanically scanned mode.

The Enhanced Sector Scan mode merges traditional mechanical scanning with steerable electronic scanning to leverage the benefits of both technologies while simultaneously mitigating the shortcomings of either methodology. The antenna rotates mechanically, but the operator can select a specific sector where the rotation of the antenna is slowed to focus on an area.

Enhanced Tracking Sector is a pure electronically scanned mode, where the antenna is geographically stabilized or following a particular target. This mode provides enhanced detection and tracking in a selected sector by stopping the antenna and scanning purely electronically. This mode is particularly useful against low-observable targets due to its rapid track updates.

The APY-9 has a range of at least 300 nautical miles and seems to be limited only by the performance of the E-2D airframe–which normally operates at 25,000ft.

The Navy ultimately hopes to buy a total of 75 E-2D with the last examples entering the fleet in the 2020s.