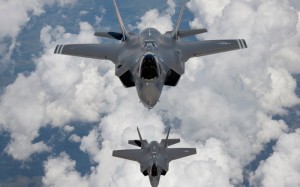 America’s gazillion-dollar Joint Strike Fighter is supposed to go virtually unseen when flying over enemy turf. But that’s not how things are working out.

The F-35 Joint Strike Fighter—the jet that the Pentagon is counting on to be the stealthy future of its tactical aircraft—is having all sorts of shortcomings. But the most serious may be that the JSF is not, in fact, stealthy in the eyes of a growing number of Russian and Chinese radars. Nor is it particularly good at jamming enemy radar. Which means the Defense Department is committing hundreds of billions of dollars to a fighter that will need the help of specialized jamming aircraft that protect non-stealthy—“radar-shiny,” as some insiders call them—aircraft today.

These problems are not secret at all. The F-35 is susceptible to detection by radars operating in the VHF bands of the spectrum. The fighter’s jamming is mostly confined to the X-band, in the sector covered by its APG-81 radar. These are not criticisms of the program but the result of choices by the customer, the Pentagon.

To suggest that the F-35 is VHF-stealthy is like arguing that the sky is not blue—literally, because both involve the same phenomenon. The late-Victorian physicist Lord Rayleigh gave his name to the way that electromagnetic radiation is scattered by objects that are smaller than its wavelength. This applies to the particles in the air that scatter sunlight, and aircraft stabilizers and wingtips that are about the same meter-class size as VHF wa

The counter-stealth attributes of VHF have been public knowledge for decades. They were known at the dawn of stealth, in 1983, when the MIT’s Lincoln Laboratory ordered a 150-foot-wide radar to emulate Russia’s P-14 Oborona VHF early-warning system. Lockheed Martin’s Fort Worth division—makers of the F-35—should know about that radar: they built it.

Making a plane VHF-stealthy starts with removing the target’s tails, as on the B-2 bombers. But we did not know how to do that on a supersonic, agile airplane (like the F-35 is supposed to be) when the JSF specifications were written.

Neither did the technology to add broadband-active jamming to a stealth aircraft exist in 1995. Not only did stealth advocates expect jamming to fade away, but there was an obvious and (at the time) insoluble problem: To use jamming you have to be certain that the radar has detected you. Otherwise, jamming is going to reveal your presence and identify you as a stealth aircraft, since the adversary can see a signal but not a reflection.

We can be sure that onboard jamming has not been added to the F-35 since. Had the JSF requirements been tightened by one iota since the program started, its advocates would be blaming that for the delays and overruns.

What the JSF does have is a jamming function—also known as “electronic attack,” or EA, in militaryese—in the radar. It also has an expendable radar decoy—BAE Systems’ ALE-70. Both are last-ditch measures to disrupt a missile engagement, not to prevent tracking.

JSF’s planners, in the mid-1990s, were close to correct when they calculated that low-band stealth and limited EA, combined with passive electronic surveillance for situational awareness, would be adequate at service entry. But they expected that the F-35 would reach squadrons in 2010, and China’s military modernization was barely imaginable.

The threats of the late 2010s will be qualitatively different. Old VHF radars could be dealt with by breaking the kill chain between detection and tracking: they did not provide good enough cueing to put analog, mechanically scanned tracking radars on to the target. Active electronically scanned array (AESA), high-power VHF radars and decimeter- and centimeter-wave trackers are more tenacious foes.

Last August, at an air show near Moscow, I talked to designers of a new, highly mobile counterstealth radar system, now being delivered to the Russian armed forces. Its centerpiece was a 100-foot-wide all-digital VHF AESA, but it also incorporated powerful higher-frequency radars that can track small targets once the VHF radar has detected them. More recently, however, it has emerged that the U.S. Navy is worried because new Chinese warships carry the Type 517M VHF search radar, which its maker says is an AESA.

None of this is to say that stealth is dead, but it is not reasonable to expect that the cat-and-mouse game of detection and evasion in air combat has stopped, or that it ever will. EA and stealth still do not coexist very comfortably on the same platform, but offboard EA and stealth are synergistic: the smaller the target, the less jamming power is needed to mask it.

But the threat’s demonstrated agility drives home the lesson that there is no one winning move in the radar game. Excessive reliance on a single-point design is not a good idea, and using fictitious secrecy to quash the debate is an even worse one.

This column also appears in the April 28 issue of Aviation Week & Space Technology.