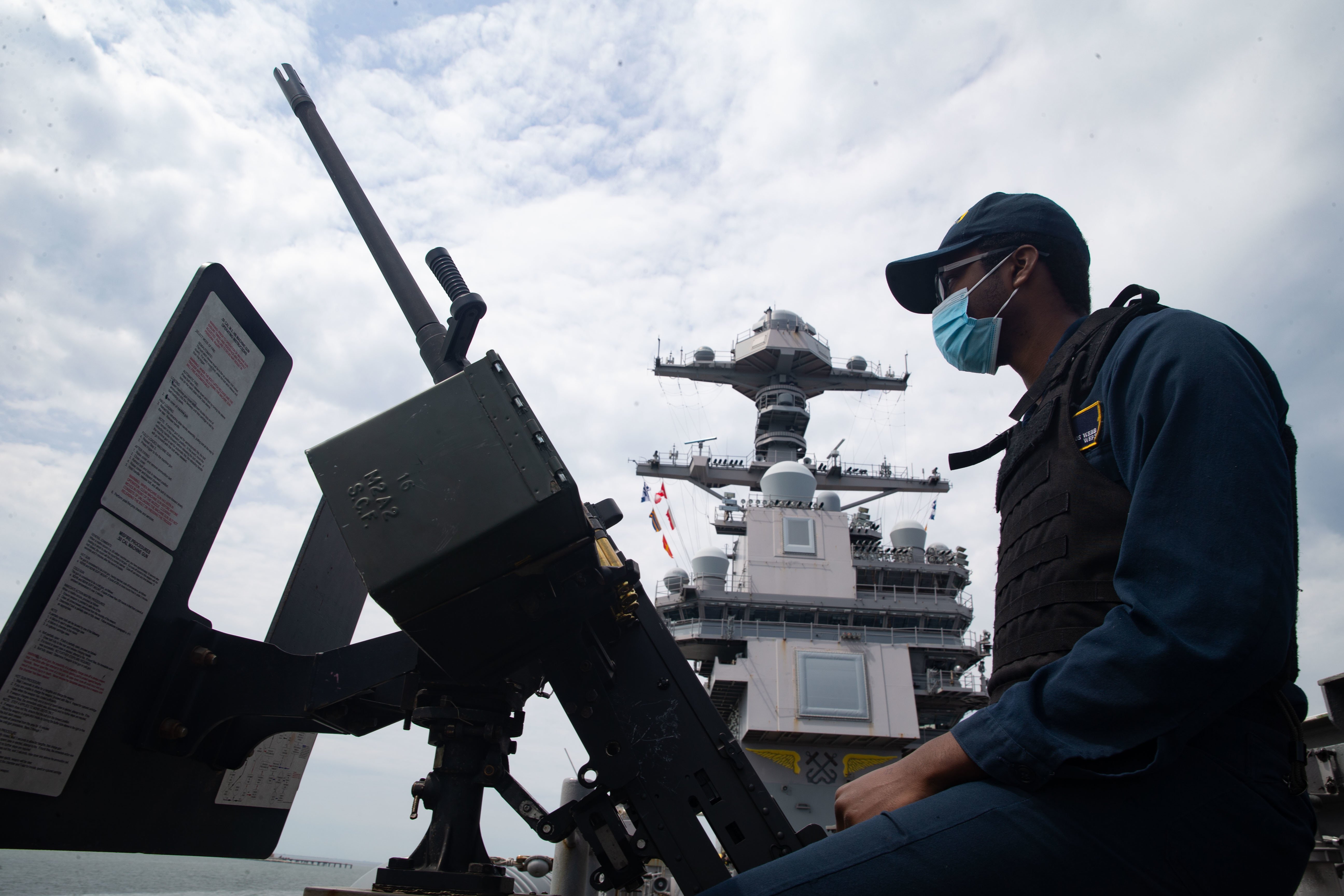 USS Gerald R. Ford (CVN-78) and its air wing and strike group had a chance to fully show off their combat capabilities, using a recent at-sea testing period to demonstrate not only that Ford can keep up with its Nimitz-class counterparts but can use its new gear to perform better and faster, leaders in the strike group told USNI News today.

Ford recently completed its Combat Systems Ship’s Qualification Trials (CSSQT) and is now wrapping up its final at-sea testing and trials period before preparing for full-ship shock trials that will take place this summer. As part of CSSQT and its other test events, Ford, its escorts and its air wing have conducted a range of activities including opposed strait transits, long-range maritime strikes, emissions control drills and air defense exercises.

A big win for the entire carrier strike group was the long-range strike event.

Capt. Josh Sager, the commander of Carrier Air Wing 8 embarked on Ford, said during a media call today that about 20 fixed-wing and rotary-wing aircraft were on the CVN for the long-range maritime strike.

“We utilized both onboard and offboard resources to basically find, fix, track and target a noncooperative target,” which was being played by a fellow U.S. Navy ship.
“So it was a huge success: bringing in the strike group, the ship and the air wing team; fixed and rotary wing; and then to recover from the aircraft carrier and return. So it just demonstrates that we are able to do, with a partial air wing embarked at this point, the full spectrum of air-to-air, air-to-surface missions that an air wing would do on any class of U.S. warship,” Sager said.

Rear Adm. Craig Clapperton, the commander of Carrier Strike Group 12 embarked on Ford, said the exercise helped practice what it would be like to face off against a near-peer adversary ship.

At the beginning of the event, the adversary ship knew where the carrier was, but the carrier didn’t know where its opponent was, “so it was part of the ship and the team’s efforts to break that contact and then hide from them, because they certainly had the capability to strike us. And then it was a bit of a competition to see if that near-peer adversary player could find, fix and attack the ship before we could find and fix them and then get the strike group out there. So that’s a pretty advanced-level effort to certainly be able to do at this point,” he said, noting that the strike group hasn’t begun any kind of pre-deployment training and workups where that type of integration and advanced warfare would be taught. 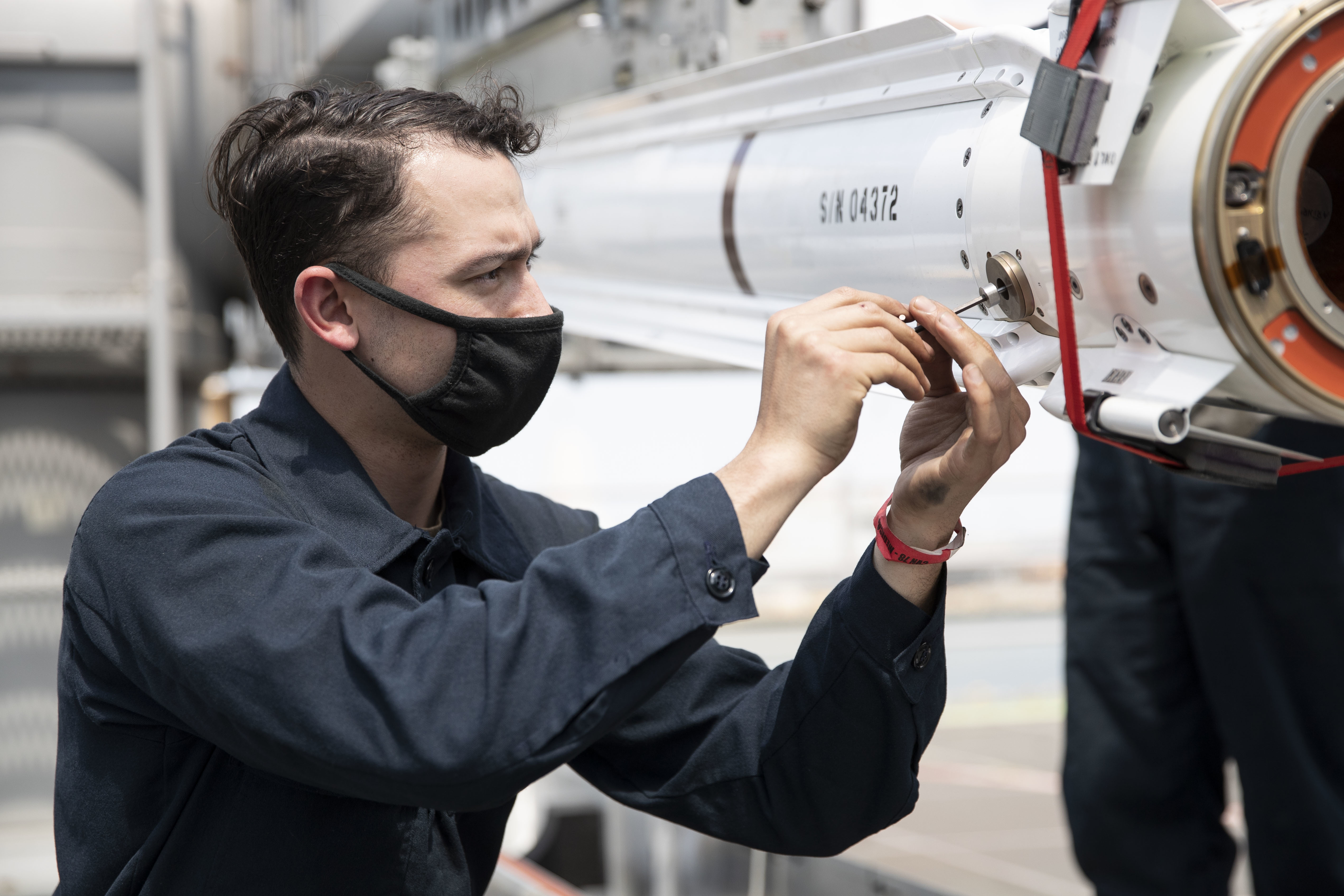 Asked how Ford, the strike group and the air wing used CSSQT and the rest of the recent at-sea period to highlight the strengths of the new class of carriers, Ford commanding officer Capt. Paul Lanzilotta told USNI News that the carrier and strike group faced off against a range of surface and air targets during the event, “starting from simple setups and then evolving to more complex defense scenarios for both air defense and surface defense, out at range and all the way close into the ship. One of the things that I took away way, maybe an evolutionary or even revolutionary step forward for Ford-class, is the command and control that’s built into the ship – the internal communications coupled with external communications, how we operate as the ship’s company within the carrier strike group command and control structure, how that information flows in terms of passing targets from one weapons system to another. We’ve been able to do all of that, which is more than just a single target coming in very predictably and shot out of the sky; we certainly did that, but we took that up a level and were able to see how the command and control setup on the Ford-class, I think, is a step up and more smooth, more efficient than the previous ship class.”

He later elaborated that the layout on Ford is different than on Nimitz-class carriers, with watchstanders having better access to each other to talk face-to-face and discuss what they’re seeing, as well as using systems that can pass data well between the weapons systems.

Clapperton added that the sea combat commander suite is about three to three-and-a-half times bigger on Ford than on the Nimitz-class, and that the Tactical Flag Command Center and the Combat Information Center are larger too – and feature reconfigurable workstations so that any watchstander can work from any location if needed. This also means that a numbered fleet staff or a NATO staff could embark on the carrier and have access to the right command and control information for the mission, the admiral said.

Because of the layout of the ship and the C2 capabilities, “the air wing and the destroyer squadron team, working with the ship, have come up with a sort of a new wrinkle that obviously I can’t talk about in detail, but a new wrinkle in how we command and control those opposed strait transits that we think streamlines the C2 and the information flow and allows for a bit more agile employment of the assets. And it’s just some creative thought based on the different layout here on Ford that has enabled our really smart junior officers to get together and find what I think is going to be a really more efficient way to do this – and it might be something we’ll see in the future if even the Nimitz class picks up this construct as we move forward,” Clapperton said.

On air defense, between the C2 gear and the new Dual-Band Radar, Clapperton said the strike group has worked out a way to make the air and missile defense commander a closer liaison with the rest of the CSG and create a “flattened” C2 process. The CSG has an air defense exercise this evening that Clapperton said would be a good chance to display this process.

“We’ve got improved, flatter information flow – again, taking advantage of the capabilities of what the Dual-Band Radar brings, see if that works any better,” he said. 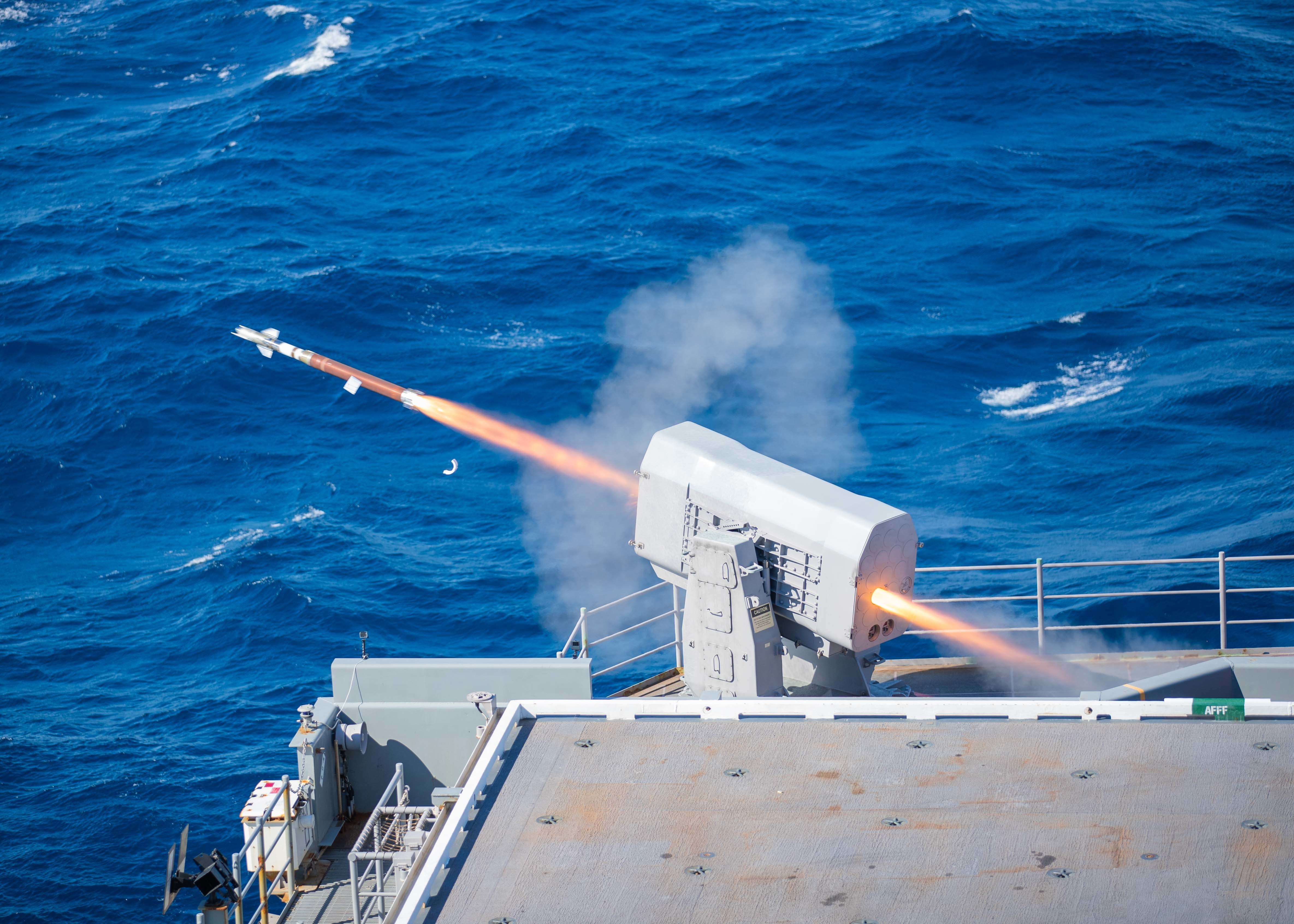 Sager told USNI News during the call that the air wing’s top priority is gaining and maintaining air superiority around the aircraft carrier, and they’ve been able to prove not only that they can do it on the Ford-class but that they can do it better than on a Nimitz-class ship.

“One of the things we’ve been able to do through the independent steaming events is not only validate that we as an air wing can operate in the same manner that we used to on a Nimitz-class, but where we’re going with [Independent Steaming Event] 18 is we’re now starting to expand and figure out how we can refine our [tactics, techniques and procedures] based on the additional capabilities of the Ford: specifically what I’m talking about is EMALS (Electromagnetic Aircraft Launch System) and AAG (Advanced Arresting Gear), the reliability and the availability being there, so we can launch more aircraft, recover more aircraft, and do it in a more efficient manner. The in-deck flight refueling station; the Advanced Weapons Elevators; we’re learning how to spot the aircraft so that we can rearm, recrew and then eventually relaunch those aircraft. Not just executing cyclic operations, but now going to more of a flex deck mindset or an open deck mindset where we can launch and recover aircraft faster than a Nimitz-class, rearm those and take more aircraft to the fight,” Sager said.

“We’re now to the point where we’re not trying to figure out if the Ford can do the same thing as the Nimitz-class. What we’re doing is, now we’re expanding on what the Nimitz-class can do and taking that to the next level.”

Now that Ford has had a chance to prove its capability at sea during the past 18 months of post-delivery tests and trials, the crew will shift gears and prepare for full-ship shock trials. Lanzilotta said the crew would focus on material planning, inspections of the ship, getting sensors and instrumentation set up, removing non-warfare-related items from the ship that would be damaged in the blasts, and training for potential casualties to the ship when a series of blasts are detonated in the water near the aircraft carrier.

“We know the kind of thing that we’re going into, so we know we’re going to focus our training on repairing small and medium and potentially large leaks in different piping systems; we know that we’re going to look to be ready to address any structural issues we have. I don’t anticipate them, frankly, based on the success of the USS Theodore Roosevelt (CVN-71) shock trial that was in 1987,” he said.
“I have no doubt in my mind that Huntington Ingalls Industries and Newport News Shipbuilding have built this ship to an even higher level of strength and resilience.”

“We are already postured with things to repair or replace that were seen in the Theodore Roosevelt shock trial: things like lightbulbs that tend to break, basic things like that, we’ve got spares coming to us already,” he told USNI News about preparing for the repair work that will follow the shock trials.

Lanzilotta said he didn’t expect the upcoming maintenance period – considered a regular planned incremental availability – to be greatly affected by the shock trials, since he expects damage from the in-water blasts to be minimal. But he said the Navy was ready to respond to anything that might come up – and that a small contingent of industry representatives would be on the carrier during the shock trials to start assessing damage right away and coordinate with the Newport News Shipbuilding yard in Virginia about any new repairs that will need to be made during the PIA. 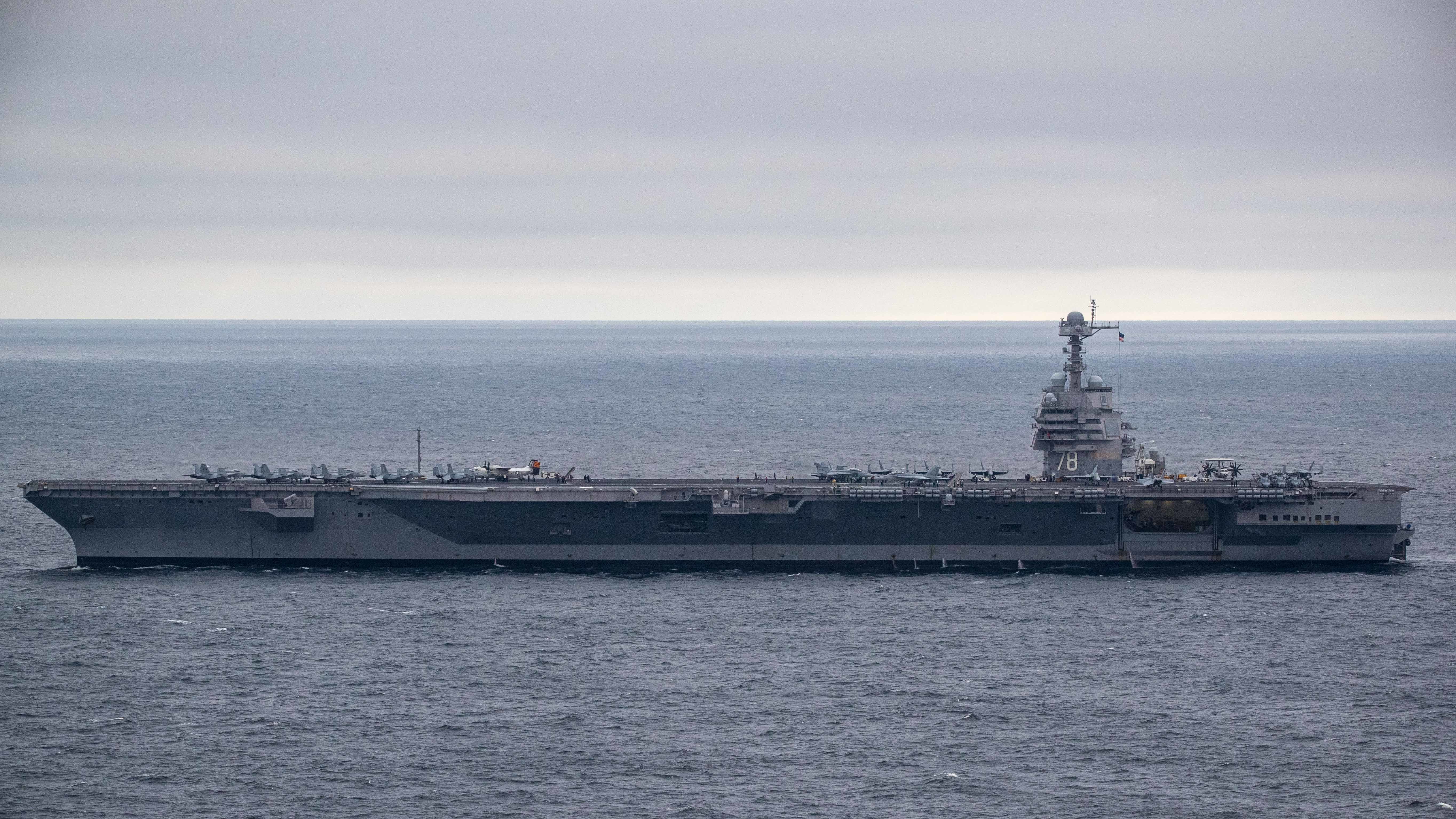 Clapperton said the Ford Carrier Strike Group had previously been expected to deploy in 2024 but that the timeline had been pulled up about 18 months based largely on maintenance work being conducted on the CVN throughout the post-delivery tests and trials period instead of waiting for the PIA.

“Because of the work of this team here, we believe we’ve been able to pull that back about 18 months. And we are right now in work with our joint service partners here in the United States and with important NATO allies and partners in the Atlantic to try to pull that timeline back, as I said, probably 12 to 18 months,” he said, though he could not speculate on exactly when the Ford CSG might begin pre-deployment training and head out on a maiden operational deployment.

Even ahead of the deployment, during the last year of testing, Clapperton praised the carrier’s crew for recognizing that they were writing history with their work on the ship and laying the groundwork for how future generations of sailors will conduct carrier operations.

“I think our sailors really understand that this is a different class of an aircraft carrier and that, while there will certainly be things that are similar to Nimitz, there will be things that are different. And so one of the key differences is, they know that there’s really a blank whiteboard out there for how they want to fight, employ and train on this ship, and I think the team has really embraced that,” Clapperton said, adding that even very junior sailors and officers have generated some great ideas so far and understand that “this is our chance to sort of build that foundation and write what the future’s going to be like.”