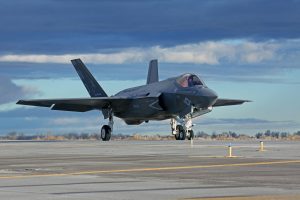 The first F-35C Lightning II Joint Strike Fighters will arrive on the West Coast next week as the Navy prepares to ramp up its training pipeline for the next-generation stealth jet designed for carrier operations, Navy officials announced Tuesday.

The “Rough Raiders” of VFA-125, will become the Navy’s latest squadron to get the advanced fighter designed for its carrier-based force. The squadron will serve as the west coast-based Fleet Replacement Squadron.

The Navy’s first F-35C FRS squadron, the “Grim Reapers” of VFA-101 based at Eglin Air Force Base, Fla., received its first jets in September 2013 and began training the first groups of pilots and maintainers.

The joint JSF program and Lockheed Martin-built jets have come under heavy criticism, most recently from President-elect Donald Trump, over escalating costs for the jet and continuing program delays, even as the services continue with the jet’s development, live-fire weapons fire testing and upgrade packages including advanced software. The Pentagon’s Director of Operational Test and Evaluation also levied some pointed criticism and skepticism at the F-35 program in its FY 2016 annual report issued in December.

But program officials remain on the defensive but confident.

“These accomplishments prove the basic design of the F-35 is sound and test results reinforce our confidence in the ultimate performance the U.S. and its partners and allies value greatly,” Air Force Lt. Gen. Chris Bogdan, the F-35 Program Executive officer, said about the F-35 in a Jan. 17 statement remarking on the DOT&E report. “As a reminder, the F-35 program is still in its developmental phase. This is the time when issues are expected to be discovered and solutions are implemented to maximize the F-35’s capability for the warfighter. While the development program is more than 90 percent complete, we recognize there are known deficiencies that must be corrected and there remains the potential for future findings.”