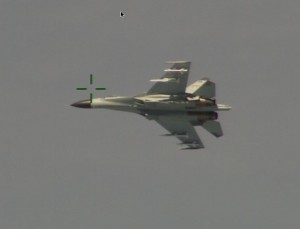 O wad some Power the giftie gie us
To see oursels as ithers see us!
It wad frae mony a blunder free us….
– Robert Burns, “To A Louse”

WASHINGTON: A tag-team of Chinese reporters pressed the normally soft-spoken Chief of Naval Operations into making some fairly blunt statements on US-China relations this morning. It was an illuminating and unsettling clash of perspectives.

Adm. Jonathan Greenert devoted his opening remarks at the Carnegie Endowment for International Peace to naval cooperation in the Pacific – especially with China – where he spent four days in July and met for the fourth time in 12 months with his Chinese counterpart, Adm. Wu Shengli. The CNO pointedly did not mention the August incident during which a PLA Navy fighter did a dangerous barrel roll over top of a US P-8 Poseidon surveillance plane, an unnerving echo of a 2001 incident in which a Chinese pilot buzzed a P-3 Orion so closely the planes collided and crashed.

The moment the floor opened to questions, however, a Chinese journalist took the mike and asked about the “encounter.” Had Greenert and Adm. Wu made any “progress [on] the issue of the US surveillance activities in international [air]space near by China?” the reporter asked in a thick accent. “Are you concerned that similar encounters will happen more frequently in the future?

“I am concerned that such unprofessional activity — and we have clear documentation that it was unprofessional — … would happen in the future,” Greenert replied. “One of our maritime patrol aircraft flying in international airspace, well over a 100-plus miles from the coast, was intercepted,” he said. There’s nothing wrong with such intercepts, he said, noting that the US and Russia did them all the time during the Cold War, but “there is a norm [for] operating safely” that the Chinese pilot in this incident ignored.

A second Chinese reporter, from the state-owned China Daily, followed up at once: “The issue the US seems to avoid [is] reducing their surveillance, which Chinese have expressed [sic] offensive and provocative,” he said. The reporter went on to say that, from the Chinese perspective, it’s alarming that the US is contemplating naval exercises with Vietnam (which fought China much more recently than it fought Americans).

“That will be an interesting conversation which I assure you I will have, we will have, with the Chinese navy,” Greenert said — implicitly pledging not to blindside Beijing. While he’s not gotten into specifics with the Vietnamese, he went on, the model is probably the Cooperation Afloat Readiness And Training exercises (CARAT) the US has held for years with other Southeast Asia nations: “We work on, predominantly, counter-piracy; we work on counter-terrorism; we work on search and rescue, humanitarian assistance, disaster relief,” Greenert said, “as opposed to working together to target some other navy or nation.”

Apparently satisfied with this answer on Vietnam, the reporter pressed on the part of his question the CNO had (deliberately or otherwise) not addressed: Will the US “reduce the surveillance along the Chinese coast”?

“There’s no intention that I’m aware of to do that,” he said. “We’re flying in international airspace. China comes and steams in our Exclusive Economic Zone, we don’t make a big deal out of it.” (In fact, an uninvited Chinese spy ship observed the recent Rim of the Pacific exercises even as other Chinese Navy vessels participated officially).

The two Chinese reporters weren’t the only ones grinding axes. Another Asian journalist asked about not only the P-8 incident but also how Taiwan could get attack submarines, which other nations have consistently declined to sell the island nation — in large part due to Chinese pressure.

“I’ve had conversations with my… Taiwan counterpart; I won’t discuss them here, I can’t,” Greenert said, laughing. As for the P-8 incident, “it should be noted,” he said, but it is not representative. Even the high-profile near-collision between the US cruiser Cowpens and an escort vessel for the Chinese carrier Liaoning had a happy ending, the CNO said. “What happened after the Cowpens puts on the brakes and gets to a halt is the commanding officer of the Liaoning gets on the international circuit and says, ‘what’s going on over there,’ and he and the commanding officer of the Cowpen have a conversation,” Greenert said. “The whole thing defuses.”

In fact, there has been at least one example of “Chinese Navy vessels coming in to help preclude [incidents],” the CNO said, even performing “blocking maneuvers to keep somebody from going in too close.”
[UPDATED: A Navy official explained that the US ship in question was the destroyer Spruance, which was patrolling the South China Sea when “a Chinese commercial vessel” started harassing and coming towards the US Navy ship, transmitting what the Wall Street Journal called “abusive messages over the radio in Chinese and English.” A Chinese Navy vessel overhead the “unprofessional” transmissions and intervened. The PLAN ship physically interposed their ship between the errant Chinese vessel and the Spruance, the official said, “and remained there until the active harassment by the Chinese commercial ship stopped.”]

It’s worth noting that it’s the Chinese Coast Guard and ostensibly civilian vessels, like fishing craft, that usually spearhead provocations in the Pacific — not the regular Chinese Navy. (Greenert made a point of visiting the State Oceanic Administration, which controls the nascent Chinese Coast Guard, and urging them to adopt the same Code for Unexpected Encounters at Sea (CUES) already agreed to by the PLA Navy.) Given the notorious opacity of Chinese government decision-making, it’s unclear whether this difference of approaches is a deliberate good cop/bad cop policy or a genuine difference in approach between different factions.

Despite Greenert’s efforts to get back on a positive track, yet another journalist — an American this time — asked if US aircraft carriers could safely traverse the Strait of Taiwan in a repeat of the 1995-1996 crisis there. After nervous laughter around the room, Greenert simply said “we’ve been working very hard” to find weak links in the “kill chain” required to hit a US warship: Long before a missile can launch, the enemy must find the target amidst the vastness of the ocean, identify it as a target, track it, and then pass the data to the missile, which then needs to close the distance without being shot down or decoyed away.

Key to this kind of conflict is electronic warfare: jamming, spoofing, eavesdropping, and, in the modern era, hacking. Just last week, the Pentagon’s top technologist, Alan Shaffer, made the alarming statement that “we have lost the electromagnetic spectrum” and must “regain some dominance…or at least parity.”

Adm. Greenert himself has repeatedly warned about electronic warfare shortfalls, including in an op-ed for this website, but when I quoted Shaffer to him this morning, the CNO respectfully disagreed — up to a point.

“I disagree that we’ve, if you will, ‘lost’ parity, but we have lost momentum. I would put it that way,” Greenert said. “I think we can regain it.” Using everything from new technologies to new training to the evolving Air-Sea Battle doctrine, the CNO said, “we have got to inject adrenaline into the whole concept.”

What the CNO didn’t say is that even if the US and China never fire a shot at one another — and let’s all pray they don’t — a battle in the electromagnetic spectrum and in cyberspace is already underway.