This post has been updated to clarify that the Marine Corps would be interested in the light attack aircraft to support its training and exercises. A previous version of the article stated, due to source error, that the Marine Corps would consider using a light attack aircraft to support the joint force but did not have its own internal requirement for the airplane.

As the Air Force mulls its need for a light attack aircraft to supplement its fleet of high-end strike aircraft, the Marine Corps and Navy are also studying the program, Air Force and Marine officials told USNI News.

Department of the Navy involvement in the Air Force Light Attack Experiment (OA-X) was put in stark relief in late June after Navy pilot Lt. Christopher Carey Short died following the crash of an Embraer A-29 Super Tucano near Holloman Air Force Base in New Mexico.

“A mix of aircrew with combat experience are flying in the experiment. This mix includes developmental test aircrew, operational test aircrew, and experienced instructor pilots from the combat air force. We have Air Force, Navy, and Marine Corps aircrew, as well as participation from the Air National Guard and Air Force Reserve,” Air Force spokeswoman Maj. Emily Grabowski told USNI News.
“The light attack experimentation program was designed to gather information about non-developmental aircraft that may be suitable in permissive airspace environments, to meet current mission demands and help alleviate capacity and readiness shortfalls at a much lower cost, while increasing combat power.”

Representatives from Marine Corps Aviation and Naval Air Systems Command (NAVAIR) have been present for the most recent round of OA-X testing out of Holloman, Grabowski told USNI News. 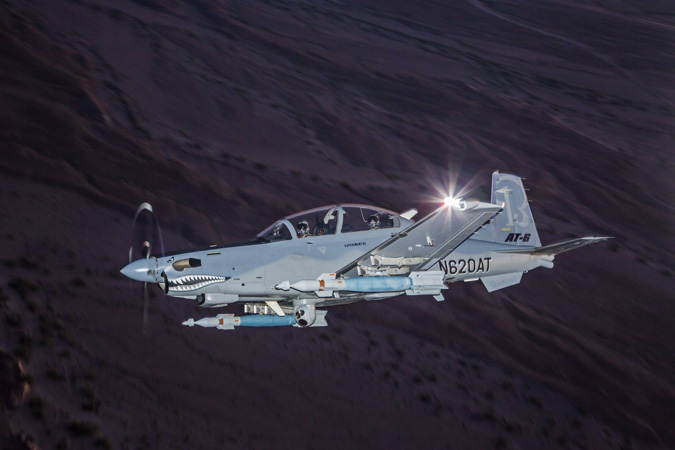 The AT-6 Wolverine. Textron Aviation photo.

OA-X was in a second phase of testing, set to run through the end of this month, that would put the A-29 and the Textron Aviation AT-6B Wolverine through a series of tests to gauge their suitability in uncontested environments to perform light strike and close air support (CAS) of ground troops. However, as Defense News reported this week, the tests have been canceled following Short’s June 22 crash.

Lt. Gen. Arnold Bunch, the Air Force’s top uniformed acquisition official, said the flying portion of the experiment is over but that the effort would continue to move forward, with his office “working multiple fronts so that we can put an RFP [request for proposals] out” by December if the services continue to pursue a light attack aircraft, Bunch said, according to Defense News. “So right now, we’re still progressing down that path. I’ve not pulled back on the throttle on any way, shape or form in that area right now.”

Though the Air Force does not yet have a formal requirement for a light attack aircraft, the service is giving the program serious consideration as a way to free up higher-cost strike aircraft that are in high demand.

To that end, there is an appeal for the Marine Corps to also acquire a light attack aircraft to supplement its new fleet of emerging Lockheed Martin F-35B Lighting II Joint Strike Fighters – the most capable and expensive fighters the Marines have ever fielded.

The Senate Armed Services Committee included $100 million in their version of the Fiscal Year 2019 authorization bill for a Marine light attack aircraft. That bill language is currently being reconciled with the House’s bill, with final compromise language due out later this year.

If the Marine Corps pursued the light attack aircraft, it would be to assist in various training events rather than to fill an operational need.

By using less-expensive light attack aircraft for these training and exercise events, flight hours on the more expensive F-35Bs, AV-8B Harriers and F/A-18C Hornets could be preserved for when those aircraft are actually needed: for training pilots, for pre-deployment workups and for operations overseas.

Last month, an aviation industry source told reporters in a conference call that the Air Force could issue a request for proposal by October, Military.com reported in June. Following the RFP, a contract for a few hundred aircraft could emerge as soon as six months later, the site reported.