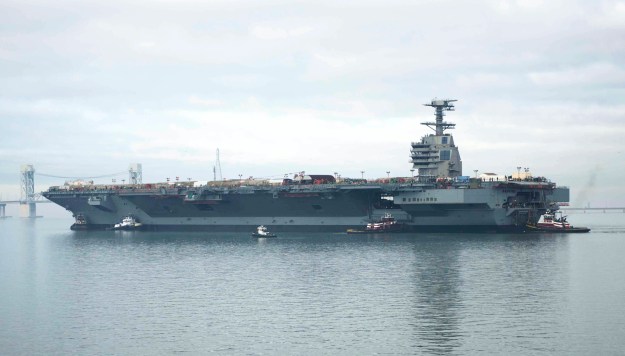 The Navy’s newest aircraft carrier may see a two-year delay in its maiden deployment, after Pentagon officials announced last month it would be put through shock trials before being allowed overseas.

The Pentagon originally said the decision could delay the carrier by six months – as first reported by Bloomberg News – but the Navy’s assistant deputy chief of naval operations for operations, plans and strategy (OPNAV N3/5B) told reporters today that the delay could be up to two years.

“The addition of the shock trials is modifying the deployment schedule. As it stands now, there is a significant delay in being able to deploy the Gerald R. Ford,” Rear Adm. Jeffrey Harley said after a House Armed Services Committee hearing.
“We are reviewing ways in which we can mitigate the deployment schedule and the presence requirements.”

Capt. Thom Burke, director of fleet readiness (OPNAV N43), said after the hearing that the length of the delay would depend on how well the carrier performs in the test, which uses live underwater explosives to test the survivability of a ship’s system under extreme conditions.

“A shock trial is an uncertain event. What’s going to break when you do it?” he said.
“So there’s a window of uncertainty there as to how significant is the shock trial, how well is the ship going to do? It’s a brand new ship. Why do you do a shock trial? You do it because it’s a brand new class of ship. If it goes to design then nothing breaks and you don’t have that two years. But if a lot of things end up needing to be repaired then it’s going to be longer. So it’s pretty uncertain, it’s a big window.”

Harley added that U.S. Fleet Forces Command is reviewing ways to keep up its global carrier presence with only 10 carriers – Ford will bring the fleet back up to the congressionally mandated 11 carriers – for an even longer amount of time. Ford is expected to commission next year and would enter the fleet in the early 2020s, so Harley said the Navy had plenty of time to come up with a plan in the event that Ford needs significant repair work after the test.

Due to the delays in the manufacture of Ford, the Navy had pushed to conduct the shock tests — a test using live explosives to test the ship, crew and systems in a near combat situation — to the second ship in the class, John F. Kennedy (CVN-79).

However, they were overruled by the Office of the Secretary of Defense (OSD).

In an Aug. 7 memo from Under Secretary of Defense for Acquisition, Technology and Logistics (AT&L) Frank Kendall to Navy Secretary Ray Mabus, Kendall directed the Navy to fund the shock tests as part of the Department of the Navy’s Fiscal Year 2017 budget submission and provide OSD a full plan for the tests by December.

“The operational implications of any delay to CVN-78 entering the CVN deployment cycle caused by scheduling the [shock tests] prior to initial deployment are acknowledged and were considered, “read a portion of the memo cited in Defense News.