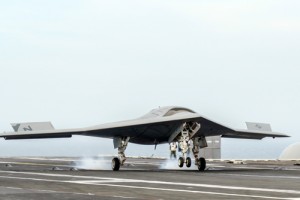 It’s clear that the Navy intends to buy a carrier-based unmanned aircraft able to conduct reconnaissance and, if needed, strike a target. But after years of deliberation among service officials, industry remains confused on the requirements for the system’s stealth and payload capabilities, company executives and experts said.

The Navy in 2010 first released a request for information for the unmanned carrier-launched airborne surveillance and strike aircraft, or UCLASS, but officials took years debating whether it wanted a revolutionary technology or something less risky. The competition finally kicked off last year when Boeing, General Atomics, Northrop Grumman and Lockheed Martin were awarded contracts to develop preliminary designs.

Officials from all four manufacturers declined to comment on the record for this article.
However, one industry insider involved in the program said that the Navy had
altered UCLASS specifications throughout the preliminary design review stage.

“We’re looking forward to [a request for proposals] in the hope that it’s going to finally clarify the requirements, clarify what kind of schedule the Navy is expecting, and we’re also looking for some clarity in the source selection criteria. … Those are all question marks that have yet to be answered,” he said.

The Navy in March released a notice that a draft RFP was forthcoming, and industry officials predicted requirements would be in hand by the end of the month. In early April, Rear Adm. Mathias Winter, the service’s program executive officer for unmanned aviation and strike weapons, announced that it would be released later in the month but would not be publicly available. The Navy released the RFP April 17.

“The [chief of naval operations] has approved his war fighter requirements, and those requirements are solid, and they’ve been solid since April 2013,” he said. “We have to flow
those down into technical design requirements, and we’re ensuring that those technical design requirements are realistic, logical and affordable to provide the war fighting capability CNO has asked us to give him — and that’s two 24/7 … orbits from the aircraft carrier at a tactically significant range, providing ISR information and situational awareness back to the commander of the strike group.”

Companies were given draft specifications last September when the preliminary design review began. But in December, the Navy released an update that, in some places, was significantly different from the original copy, an industry source told National Defense.

“The issue that we’re trying to balance is there’s quite a bit of technical work that has gone into our baseline design, and altering that design in a significant way [means we] would have to go back and redo some of the work in some of the system areas,” the official
said. With the requirements still not finalized, the team decided to continue developing their baseline UCLASS design while separately working through the specification changes in case they are incorporated in the RFP.

During the Navy League’s Sea-Air-Space conference in April, Winter laid out some of
UCLASS’s capabilities. The Navy will need enough systems to collect ISR continuously through means such as electro-optical and infrared cameras and signals intelligence, he said. It will have a “limited” ability to strike targets on the ground. UCLASS will also be able to refuel other aircraft and be refueled while in flight. The system would initially operate in uncontested environments, but would be able to be modified at a later time for use in contested airspace if needed, he said.

Creating a system that does all of that is easier said than done, said Chuck Nash, a retired Navy captain and military analyst. The Navy has never operated a fleet of drones from an aircraft carrier and is working under budgetary constraints. With that in mind, he believes the service should develop UCLASS as an intelligence, surveillance and reconnaissance asset comprising proven technologies, while also building in excess weight, space and power to incorporate new sensors later on.

“It would be very useful to go out and take a look at different ships and maybe [include] a standoff sensor to stay out in international airspace but look along the shorelines,” he said. “It has got excess capacity, so that once you figure out what you want this thing to really do, then you could add sensors to it or you could add capability to it.”

However, some Navy officials are more interested in creating a stealthy UAS capable of operating in contested airspaces, Nash said.

“When you do that, what you’ve just done is you’ve added a whole bunch of risk, and risk equals money. So you’ve added risk and cost to something the Navy’s never done before,” he said. “You’re setting this thing up to run over budget, over schedule and under expectations.”

Among the changes to the system’s original specifications were increases in stealth
that some Navy officials believe are vital to operations in the Asia-Pacific region, the industry source confirmed.

“If UCLASS is going to be on the carriers, and it’s going to be in the fleet for say, the next 20 years, it is going to see a lot of time at sea in places … and perhaps in situations where
the threat levels are pretty significant,” he said.

The Navy also indicated that it may want UCLASS to carry bigger payloads than originally
expected. That way, the UAS could accommodate the newest sensors or weapons as they are fielded, the industry source said.

“One thing you have to remember, though, about payload in particular is that [it] does drive the size of the vehicle. In other words, the more payload you want … the bigger the
airplane has to be,” he said. And as weight and size increase, so does cost, he added.

Forbes contended that because UCLASS will be the Navy’s only armed drone, it should be able to survive in contested environments and carry heavy payloads. He also advocated for greater stealth, adding that “years of government and industry analysis has shown that radar cross section reduction throughout the threat frequency spectrum is required for
survivability.”

With few new-start unmanned aircraft programs in sight, industry is chomping at the bit for the chance at the UCLASS contract. The program would receive $403 million if fully funded in fiscal year 2015.

After the draft request for proposals is released, the service plans to have an industry day where companies can give feedback on requirements, Winter said.  A final RFP is scheduled for release this summer.

The service will downselect to a single competitor as early as 2015, and the first flight of the aircraft is scheduled for fiscal year 2018.

But if the final requirements include extreme changes to the original specifications, companies could be left scrambling to rework the designs they had refined during the preliminary design review phase, the industry source said.

Although competitors were loath to talk about their designs, it is likely that all will propose offerings based on or derived from existing aircraft.

General Atomics has announced that it will offer the Sea Avenger, a maritime version of its Predator C with folding wings, an internal weapons bay and a retractable electro-optical/infrared camera. The company conducted a wind tunnel test on a model of the Sea Avenger
in 2011.

Lockheed Martin’s Skunk Works is designing a tailless flying wing that will integrate hardware and software from the company’s F-35 joint strike fighter and RQ-170 Sentinel aircraft. Its design will incorporate an open-architecture approach, allowing it to rapidly integrate new sensors and communications equipment, program manager Bob Ruszkowski has said.

Boeing could offer its Phantom Ray, a stealthy tailless flying wing that first flew in
April 2011 at Edwards Air Force Base in California. The company derived the aircraft from its X-45C proposed in the unmanned combat air system demonstrator program, or UCAS-D. The program was developed to demonstrate that an unmanned aircraft could operate from the deck of an aircraft carrier.

While Northrop Grumman has not disclosed its offering, it will likely incorporate
technologies from its X-47B aircraft that won the UCAS-D contract. The UAS made
headlines last year when it accomplished arrested and touch-and-go landings from
the deck of the USS George H.W. Bush.

The UCAS-D program was scheduled to end after those demonstrations, but the Navy extended the program in order to reduce risk and further mature air traffic control procedures. Since then, the X-47B has completed additional trials on the USS Theodore Roosevelt.

The exercises, which will be held on the Roosevelt, will focus on integrating the X-47B with manned aircraft such as the F/A-18 Super Hornet and handling the aircraft on the ship’s
deck, he said.

“Up until now … we’ve had exclusive use of airspace on the ship. We’ve had X-47 basically owning the flight deck,” Duarte said. In the next phase, “there will be test aircraft with test pilots as part of a scripted plan to demonstrate how efficiently we can operate the X-47 on the deck with external stimuli.”

Tests will compare the X-47B’s ability to take off, land and clear the landing area with that of a manned aircraft. The UAS will also demonstrate its automatic wing fold capability.

Incorporating lessons learned from the UCAS-D program will be essential to successfully operating UCLASS from an aircraft carrier, Nash said. He advocated deploying both X-47Bs as a detachment to a carrier’s air wing while UCLASS is developed.

“Let’s see what they can do,” he said. “The question is, when it’s time to land these things [and] take them off, what’s going on with the rest of the air wing? Can you mix them in, or do you have to have the rest of the air wing already on board? Or do you want to recover them first so that if the thing does crash, it doesn’t crash into a packed flight deck?”

UCLASS is likely to see further delays caused by anything from shifting requirements to budget cuts, said Larry Dickerson, unmanned systems analyst for Forecast International, a
Newtown, Conn.-based consulting firm. The system will have to compete for funds against programs that Navy leaders typically see as more important. If the service has to decide whether to buy UCLASS or modernize its fleet of Super Hornets, for instance, officials will likely choose the latter, he said.

“The old mentality of the service is to protect their big programs,
their ships, their submarines, their aircraft,” he said. “Unmanned systems
usually lose in those battles.”

But such delays might not be totally unwelcome, Dickerson said. Because the program is likely to be expensive, the Navy may welcome any chance to push UCLASS further into the future, when it has more money.