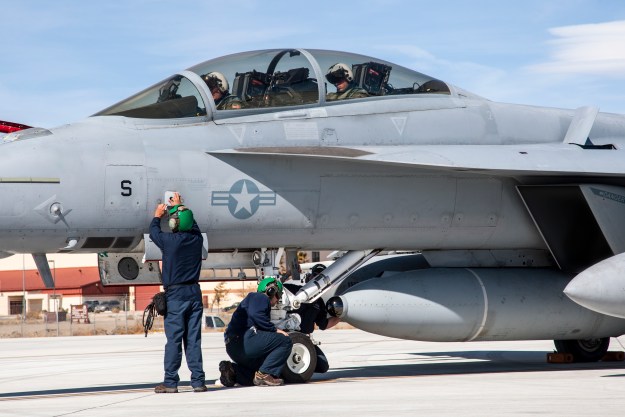 “IRST will transform the way the Super Hornet conducts air-to-air operations and allows the fleet to dominate the skies in all threat environments,” said Capt. Frank Morley, the Naval Air Systems Command’s (NAVAIR) F/A-18 and EA-18G program manager in a Feb. 18 press release. “With the successful completion of the IRST first flight, we are looking forward to moving on to the next steps required to field this invaluable capability.”

The new air-to-air sensor, which is mounted inside a modified 480-gallon centerline drop tank, was developed as a direct response to evermore-capable threat electronic-warfare systems. Of particular concern to the Pentagon is the proliferation of advanced Digital Radio Frequency Memory (DRFM) jammers, which can degrade friendly radar performance and have the potential to blind the Raytheon AIM-120 AMRAAM’s onboard radar-seeker.

The new IRST pod, which according to Lockheed is a next-generation version of the F-14D Tomcat’s AN/AAS-42 sensor, would afford the Super Hornet “an alternate air-to-air targeting system in a high-threat electronic-attack environment.”

Unlike like a radar, which uses pulses of radio waves to detect targets, the IRST is a passive sensor that uses long-wave infrared to find its quarry. Additionally, because the IRST is passive, there are no telltale emissions to alert the enemy to the Super Hornet’s presence.

According to the Navy, the new IRST system can simultaneously track multiple targets at extended ranges. However, infrared sensors are highly sensitive to environmental conditions and performance can vary wildly depending upon the weather.

The new IRST pod, which is expected to be deployed to the fleet in 2017, is not the only Navy effort intended to counter advances in threat electronic warfare capability.

The service is also working on a new Block III version of the AIM-9X Sidewinder that would increase the range of the missile by some 60 percent. That would allow pilots to use the new missile to supplement the AIM-120D for some types of beyond visual range engagements where there is heavy enemy jamming present.

According to NAVAIR, the AIM-9X Block III is expected to become operational in 2024.