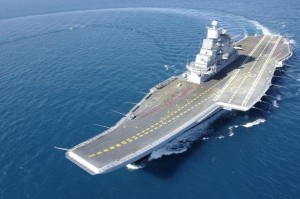 Like a lot of countries, India wants the best weapons it can afford. But ideological and financial concerns mean there are a lot of things it won’t buy from the United States or Europe. That pretty much leaves, well, Russia.

India has been a big buyer of Russian weapons for 50 years. Those haven’t been easy years for New Delhi. India’s defense contracts with Russia have consistently suffered delays and cost overruns. And the resulting hardware doesn’t always work.

Of all India’s Russian procurement woes, none speak more to the dysfunctional relationship between the two countries than the saga of INS Vikramaditya. In the early 2000s, India went shopping for a new aircraft carrier. What followed was a military-industrial nightmare.

In 1988, the Soviet Union commissioned the aircraft carrier Baku. She and her four sisters of the Kiev class represented a unique Soviet design. The front third resembled a heavy cruiser, with 12 giant SS-N-12 anti-ship missiles, up to 192 surface-to-air missiles and two 100-millimeter deck guns. The remaining two-thirds of the ship was basically an aircraft carrier, with an angled flight deck and a hangar.

Baku briefly served in the Soviet navy until the USSR dissolved in 1991. Russia inherited the vessel, renamed her Admiral Gorshkov and kept her on the rolls of the new Russian navy until 1996. After a boiler room explosion, likely due to a lack of maintenance, Admiral Gorshkov went into mothballs.

In the early 2000s, India faced a dilemma. The Indian navy’s only carrier INS Viraat was set to retire in 2007. Carriers help India assert influence over the Indian Ocean—not to mention, they’re status symbols. New Delhi needed to replace Viraat, and fast.

India’s options were limited. The only countries building carriers at the time—the United States, France and Italy—were building ships too big for India’s checkbook. In 2004, India and Russia struck a deal in which India would receive Admiral Gorshkov. The ship herself would be free, but India would pay $974 million dollars to Russia to upgrade her.

It was an ambitious project. At 44,500 tons, Admiral Gorshkov was a huge ship. Already more than a decade old, she had spent eight years languishing in mothballs. Indifference and Russia’s harsh winters are unkind to idle ships.

She would have new radars, new boilers for propulsion, new arrester wires for catching landing aircraft and new deck elevators. All 2,700 rooms and compartments—spread out over 22 decks—would be refurbished and new wiring would be laid throughout the ship. The “new” carrier would be named Vikramaditya, after an ancient Indian king.

A real aircraft carrier for less than a billion dollars sounds almost too good to be true. And it was.

In 2007, just a year before delivery, it became clear that Russia’s Sevmash shipyard couldn’t meet the ambitious deadline. Even worse, the yard demanded more than twice as much money—$2.9 billion in total—to complete the job.

The cost of sea trials alone, originally $27 million, ballooned to a fantastic $550 million.

A year later, with the project still in disarray, Sevmash estimated the carrier to be only 49-percent complete. Even more galling, one Sevmash executive suggested that India should pay an additional $2 billion, citing a “market price” of a brand-new carrier at “between $3 billion and $4 billion.”

For its part, Sevmash claimed that the job was proving much more complicated than anyone had ever imagined. Nobody had tried converting a ship into an aircraft carrier since World War II.

Sevmash specialized in submarine construction and had never worked on an aircraft carrier before. The ship had been originally built at the Nikolayev Shipyards, which after the breakup of the Soviet Union became part of the Ukraine. The tooling and specialized equipment used to build Admiral Gorshkov was thousands of miles away and now in a foreign country.

Like many contractors, defense or otherwise, Sevmash had its unhappy employer over a barrel. With the job halfway done, and having already dropped $974 million, India could not afford to walk away from the deal. Russia knew it, and was blunt about India’s options. “If India does not pay up, we will keep the aircraft carrier,” one defense ministry official told RIA-Novosti.

“There Will Be Grave Consequences”

By 2009, the project was deadlocked and word was starting to get around the defense industry. Russian arms exports for 2009 totaled $8 billion, and Sevmash’s delays and extortionary tactics weren’t good for the Russian defense industry as a whole.

In July 2009, Russia’s then-president Dmitri Medvedev made a high-profile visit to the Sevmash shipyard. Indian news reported that the carrier was still half-done, meaning that the yard had done virtually no work on the ship for two years as it held out for more money.

“Otherwise,” he added, “there will be grave consequences.”

In 2010, the Indian government agreed to more than double the budget for the carrier to $2.2 billion. This was less than the $2.9 billion Sevmash demanded, and much less than Sevmash’s suggested “market price” of $4 billion.

Suddenly, Sevmash magically started working harder—actually, twice as hard—and finished the other half of the upgrades in only three years. Vikramaditya finally entered sea trials in August 2012 and commissioned into the Indian navy in November 2013.

At the commissioning ceremony, Indian Defense Minister AK Anthony expressed relief that the ordeal was over, telling the press that there was a time “when we thought we would never get her.”

Now that Vikramaditya is finally in service, India’s problems are over, right? Not by a long shot. Incredibly, India has chosen Sevmash to do out-of-warranty work on the ship for the next 20 years.

Keeping Vikramaditya supplied with spare parts will be a major task in itself. Ten Indian contractors helped to build the carrier, but so did more than 200 other contractors in Russia, Croatia, Denmark, Germany, Italy, Japan, Finland, France, Norway, Poland, Sweden and the U.K. Some countries, particularly Japan, were likely unaware they were exporting parts for a foreign weapons system.

The ship’s boilers, which provide Vikramaditya with power and propulsion, are a long-term concern. All eight boilers are new. But yard workers discovered defects in them. During her trip from Russia to India, the flattop suffered a boiler breakdown, which Sevmash chalked up to poor-quality Chinese firebricks.

China denied ever exporting the firebricks.

Finally, Vikramaditya lacks active air defenses. The ship has chaff and flare systems to lure away anti-ship missiles, but she doesn’t have any close-in weapons systems like the American Phalanx.

India could install local versions of the Russian AK-630 gun system, but missiles will have to wait until the ship is in drydock again—and that could be up to three years from now. In the meantime, Vikramadita will have to rely on the new Indian air-defense destroyer INS Kolkata for protection from aircraft and missiles.

As for Sevmash? After the Vikramaditya fiasco, the yard is strangely upbeat about building more carriers … and has identified Brazil as a possible buyer. “Sevmash wants to build aircraft carriers,” said Sergey Novoselov, the yard’s deputy general director.