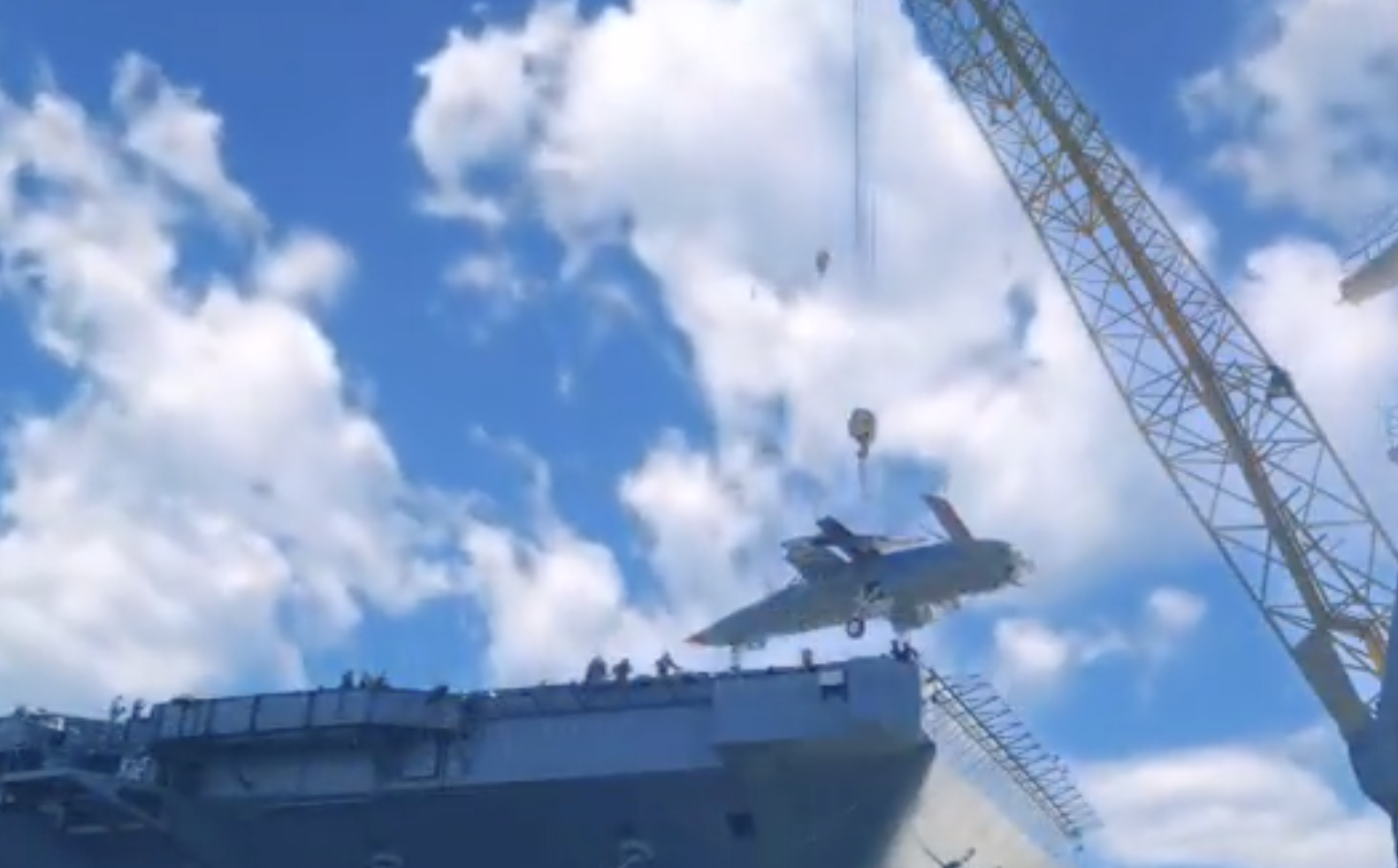 THE PENTAGON – The prototype for the Navy’s unmanned refueling tanker is now aboard a U.S. Navy aircraft carrier ahead of at-sea testing.

Rear Adm. Andrew Loiselle, who leads the chief of naval operation’s air warfare directorate (OPNAV N98), told USNI News in a recent interview that as of Tuesday, the T-1 prototype is aboard USS George H. W. Bush (CVN-77) for the ship’s carrier qualifications.

The tests for the Boeing-built MQ-25A Stingray are the next steps in providing a capability for the service to operate at longer ranges in regions like the Indo-Pacific, as it adjusts to a strategy focused on conflict with peer competitors like China and Russia.

“We’re making some great progress with T-1 and reducing risks for the program. And so the primary goal of this is to look at [performance] on the flight deck, in relevant flight deck wind conditions,” Loiselle said. “When you look at the intake on that thing up on the top of the aircraft, I’m very interested to know how that thing’s going to behave from an engine perspective with 25 plus knots of wind from all directions.”

Loiselle, who became the top aviation requirements officer in June, described MQ-25 as a crucial component of the Navy’s effort to gear up for operating at longer ranges, like those it would face in the Indo-Pacific region.

The prototype – which Boeing originally built for the Unmanned Carrier Launched Airborne Surveillance and Strike (UCLASS) program that was later retooled into a tanker – has already performed overland tests refueling an F/A-18F Super Hornet, an E-2D Advanced Hawkeye and an F-35C Lightning II Joint Strike Fighter.

The Navy plans to have warrant officers operating the tankers, with the first 10 currently going through “processing” ahead of a training that will be specific to the MQ-25A, Loiselle said. He noted that the Navy’s approach to unmanned aerial systems includes more autonomy than that of the Air Force.

“That degree of autonomy leads us to believe air vehicle operators are the way to do this. And then when we look at from a manpower perspective of what the training tracks are and the complexity of current tactics requiring people to stay in a given field in order to get the expertise necessary for the high-end fight, it’s hard to pull people out and have them do something different. Doesn’t mean that we couldn’t do it in a surge time or something along that path. But the thought is that an individual operator is going to be capable of controlling multiple drones simultaneously because of the autonomy involved.” 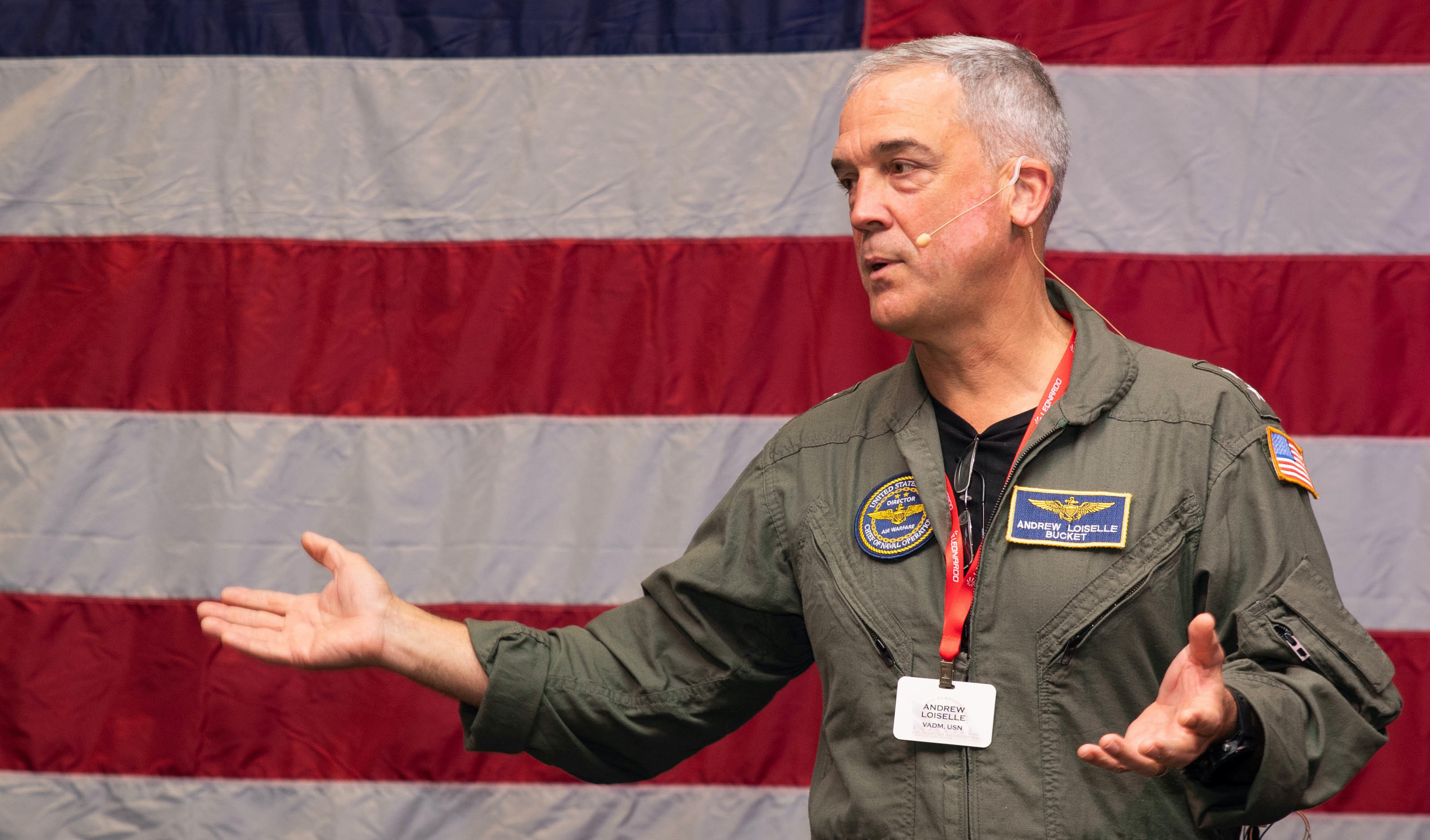 Loiselle said the Navy tried to make the MQ-25 requirements simple to expedite how fast it could get the aircraft out to the fleet, but now he is recommending other potential missions for the tanker.

“We kind of went skinny on the initial requirements for this in order to be sure that we’re able to go fast. So MQ-25 is capable of significantly more than we are asking it to do at [initial operational capability]. So at IOC, it needs to be able to operate around an aircraft carrier and be able to conduct aerial refueling and that’s as far as we went,” Loiselle said.
“The rest of it will be spiral developed because it’s got significant additional capabilities with a mission bay and weapons phase that, you know, we plan to take use of in the future. But we expect that thing to be able to pass around 15,000 pounds of gas 500 miles away from the carrier. And so you know, you can split that up and use it however you want to be able to use it. And so it’s got some significant capabilities that I think we’re going to look at adding in the future. But right now – that stuff – that’s all stuff I’m proposing and looking to get funded.”

Boeing beat out Lockheed Martin and General Atomics for the contract to build the carrier-based drone in 2018. The first few Engineering Development Model aircraft, currently under construction, are slated to come off the production line next year, while IOC is scheduled for Fiscal Year 2025.

While the Navy is currently focused on the refueling requirement, Loiselle said the service sees a future for the MQ-25 program to perform more missions like intelligence, surveillance and reconnaissance.

“It’s something that on the last launch of the night, I can shoot that thing. And it’s – instead of me launching all my helicopters from all my destroyers – I’ve got an airborne asset that can stay up all through the night and provide that recognized maritime picture overnight. [It] saves me all the wear and tear on – I mean, I’m still going to be launching some helicopters, but I don’t need as many to be doing that,” he said. “And then I’m working on the manned-unmanned teaming portion of that. Now if the helicopters get a contact here and they can have an MQ-25 overhead moving at five times the speed of a helicopter, then that allows me to get those information points into the operational picture on a much more rapid manner.”

Tim Walton, a fellow at the Hudson Institute’s Center for Defense Concepts and Technology, said a future variant of the MQ-25 could help the Navy have an aircraft aboard its carriers that can operate at longer ranges and perform other missions.

“The MQ-25 has a great deal of potential not only for ISR, but also for other missions such as strike or airborne electronic attack,” Walton, who recently co-authored a report about aerial refueling, told USNI News. 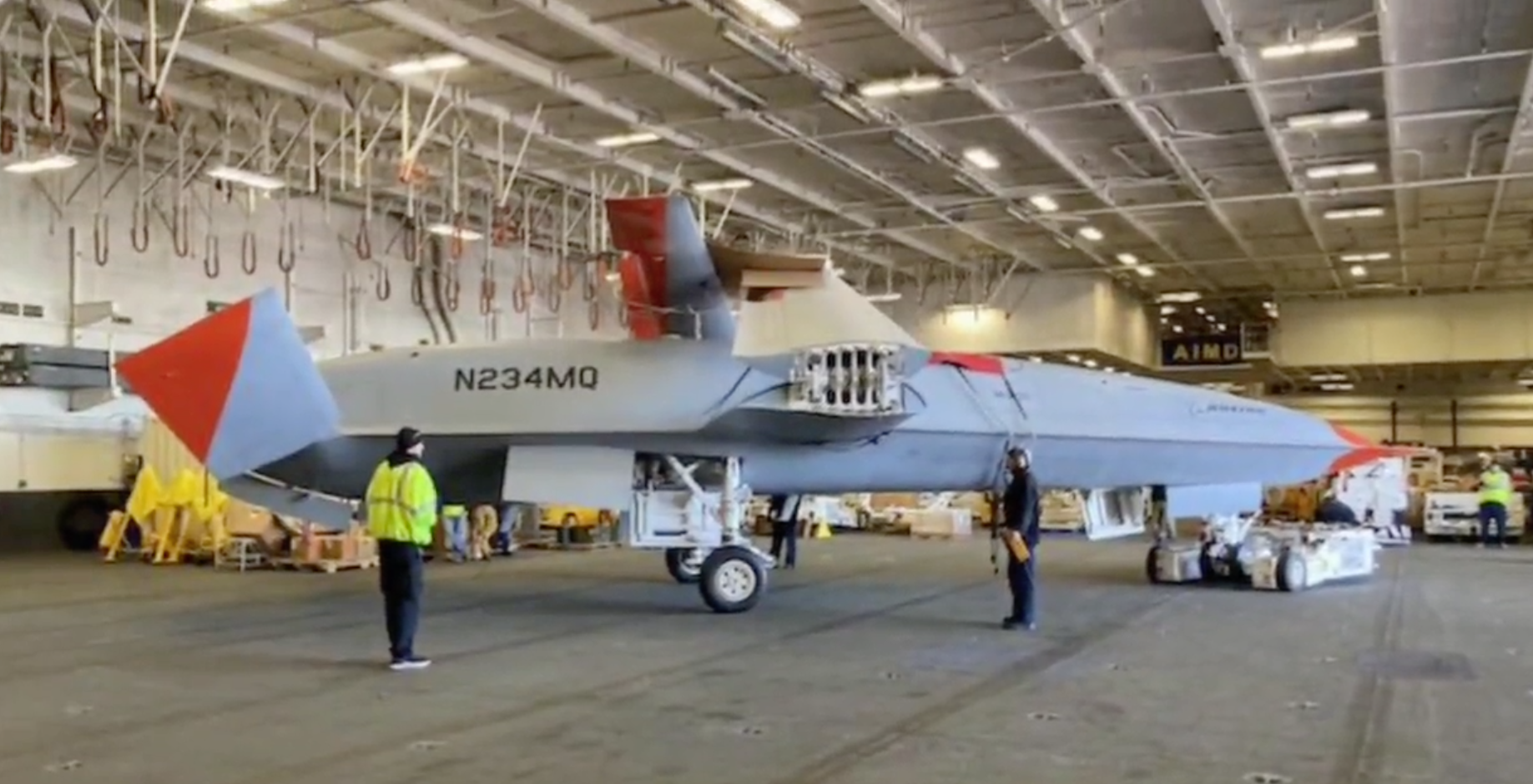 Walton’s report argued that the U.S. military needs to invest more money in the aerial refueling mission to remain competitive against China in the Indo-Pacific.

For example, the Navy would need “far more” MQ-25 tankers or help from the Air Force if it were operating an aircraft carrier outside the range of China’s DF-26 missile – which is reportedly 4,000 kilometers – with four F-35Cs, according to the report.

“The addition of the MQ-25A to the [carrier air wing] will increase the operating range of other carrier aircraft; however, the increased standoff distance that carriers and other ships may need to maintain from dangerous threats, such as land, sea, and air-launched cruise, ballistic, and hypersonic missiles, may offset the opportunities enabled by the MQ-25A,” the report reads. “Moreover, the small number of MQ-25As currently planned for procurement may drive the Navy to operate MQ-25As as ‘recovery tankers’ that provide fuel to aircraft in exigencies to help them recover aboard the carrier, rather than ‘mission tankers’ that accompany aircraft on missions far from the carrier.”

Loiselle said discussions about expanding the MQ-25A program of record “are nascent and in pending budget and top line” review.

“Right now we don’t really know where we sit for [Fiscal Year 20]22, so it’s very hard for me to say where things are going to end up in the future right now,” he said.

As for China’s capabilities in the region, Loiselle pointed to the Navy’s pursuit of MQ-25 and the sixth-generation fighter program as evidence that naval aviation is seeking to keep up with the evolving threat environment.

“Just because we’ve had the next iteration of offensive capabilities doesn’t mean that there isn’t going to be a next iteration of defensive capabilities that match those requirements. So we look very closely at it. You can see the advent of the MQ-25 to extend the range of our current fighters. You can see the NGAD program coming up looking to operate at extended ranges. And so we’ve clearly recognized this and we have acquisition strategies in place that are going to mitigate” worries about China’s missile capability and potential targeting of U.S. aircraft carriers.