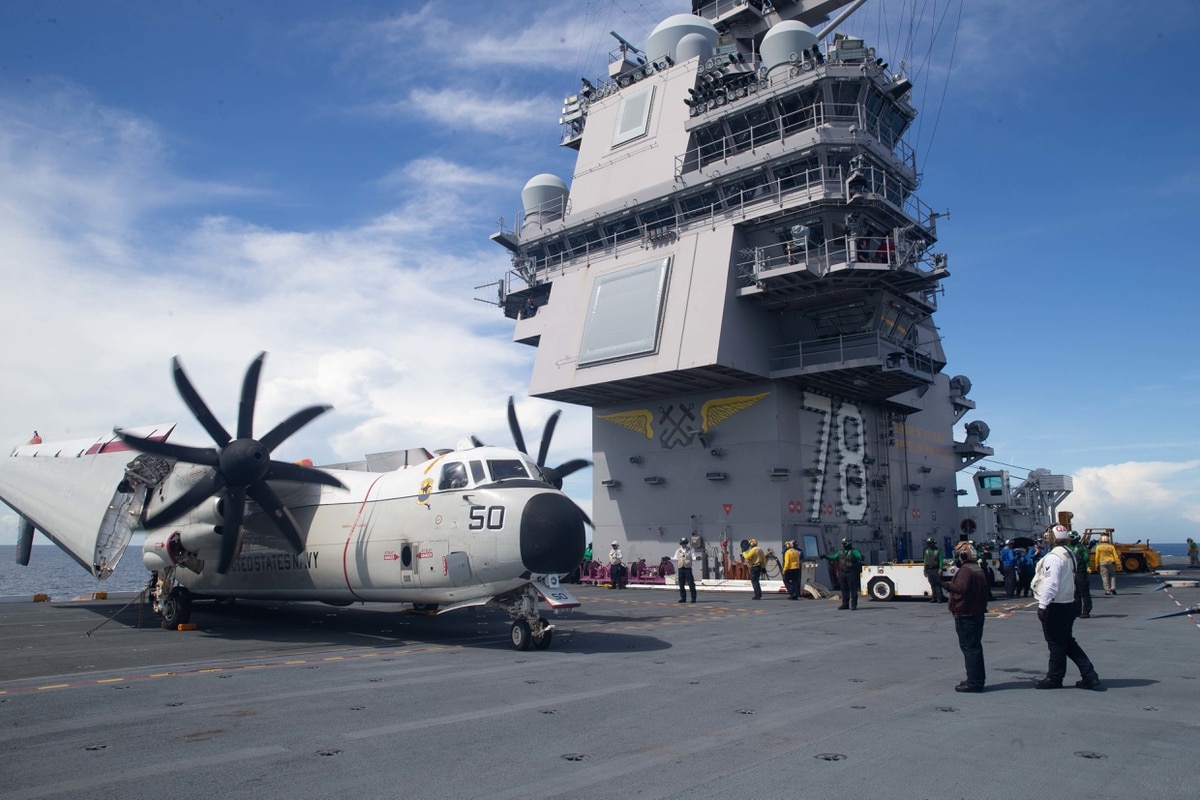 A C-2A Greyhound powers down its engines on the flight deck of the aircraft carrier Gerald R. Ford in September 2020. Ford is on track to deploy in 2022. (MC3 Zack Guth/Navy)

The aircraft carrier Gerald Ford has wrapped up its post-delivery test and trials.

The year-and-a-half-long trials, which commenced in October 2019, included certifying the flight deck, embarking the air wing and many other tasks, the Navy said.

The last stage — the combat systems qualification trials — involved a live-fire exercise in which the crew “destroyed rocket-propelled drones capable of speeds in excess of 600 miles per hour; towed drone units that simulated incoming rockets; and remote-controlled, high-speed maneuvering surface targets,” according to a Navy news release.

RIM-116 missiles, Sea Sparrow missiles, and rounds from the Mk-15 Phalanx Close-In Weapon System were all engaged as part of the combat systems ship’s qualification trials, which the Navy said concluded in mid-April.

Next up for the aircraft carrier are full ship shock trials that are slated for this summer, while a planned incremental availability is scheduled for September through February 2022.

In a message last month to the fleet, the Acting SECNAV pushed for a renewed sense of urgency to deploy the carrier.

The shock trials are designed to examine the ability of the shipboard equipment and systems to operate following a shock event, the Navy said. While the sea service said it anticipates these shock events will lead to some damage to the ship’s systems and equipment, it also expects that these repairs will not threaten future operations.

Underwater shock testing has not been administered to an aircraft carrier in the Navy since the Theodore Roosevelt underwent them in 1987, according to the Navy.

The Ford has battled technical problems, equipment malfunctions and delays since construction of the ship began in 2005, largely due to the 23 or more new technologies incorporated into the design. The advanced weapons elevators, designed to reduce the time it takes to get bombs armed and to the flight deck to mount on aircraft, proved troublesome, as did the Electromagnetic Aircraft Launch System, which replaced the steam catapult system on Nimitz-class carriers.

The carrier’s cost, originally capped at $10.5 billion, had climbed to more than $13 billion by last summer, and the Congressional Research Service cautioned then that number might continue to rise.

Even so, after having completed multiple iterations of testing over the last 18 months, the Navy says that it is now ahead of schedule with the new, first-in-class carrier.

“When we completed [Post-Shakedown Availability] in 2019, the Navy was on a path to deploy the ship in 2024,” Rear Adm. James P. Downey, program executive officer for aircraft carriers, said in a Navy news release. “Since then — especially over the last 18 months of planned test and trials events — the team … has been incredibly successful. And the best indicator of that success is that the Navy is now on a track to operationally employ the ship earlier than we had planned in 2019.”

Though ahead of its current, revised schedule, the anticipated deployment of the carrier is far behind, its original schedule.

During a House Armed Services readiness subcommittee hearing in October 2019, Vice Adm. Thomas Moore, then head of NAVSEA, acknowledged that the Ford was supposed to deploy in 2018. As she grilled Navy leaders on the Ford’s seemingly interminable delays and cost overruns, U.S. Rep. Elaine Luria, D-Va., a retired surface warfare officer, called the Ford a “nuclear powered floating barge that’s not deployable.”

Now, 16 years after construction began, the day when the USS Gerald R. Ford may actually deploy appears to be on the horizon.

“Our intentions are to deploy Ford in 2022,” Chief of Naval Operations Adm. Michael Gilday said at a United States Navy Memorial event Thursday.