The US Navy flaunted its aircraft carrier strength on Sunday, revealing that it currently has more than half of the carrier fleet underway.

Chief of Naval Operations Adm. Mike Gilday tweeted that six carriers, the Truman, Eisenhower, Reagan, Nimitz, Lincoln, and Ford, are all underway, adding that the Navy is a “#ForcetobeReckonedWith.” 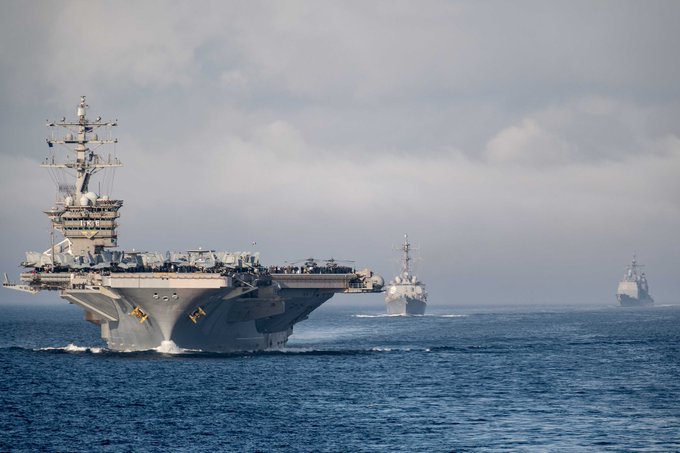 The Navy also mentioned US carrier strength in its daily COVID-19 email update.

#ICYMI – the @USNavy has 6 carriers underway right now. Truman, Eisenhower, Reagan, Nimitz, Lincoln, and Ford all operating where ships belong … at sea. We are a #ForcetobeReckonedWith. @USPacificFleet @USFleetForces @US5thFleet @USNavyEurope

The Navy’s carrier flex comes as the service continues to grapple with the challenges of a coronavirus outbreak aboard the USS Theodore Roosevelt.

The aircraft carrier’s Pacific deployment was upended by the virus, which has left the ship sidelined in Guam since late March.

The service is no longer providing specific details on the Big Stick’s status, but as of the last detailed update on April 30, the ship was dealing with 1,102 active cases among the roughly 4,800 sailors assigned to the carrier.

The entire ship was tested for the coronavirus, and more than 4,200 sailors were moved off the ship in response to the outbreak on board. Sailors have started to return to the ship, but it may be a few more weeks before the carrier is ready to get underway.

In addition to the carrier, the Navy also had a serious outbreak aboard the deployed destroyer USS Kidd, which was forced to return to port.

Despite these setbacks, the Navy has repeatedly stressed that it has not been weakened by the coronavirus, reporting in its recent COVID-19 updates that it has more than one-third of its 299 ships currently deployed at sea and that these vessels do not have any active cases.

Among the six of the Navy’s 11 aircraft carriers mentioned Sunday, at least two, the Nimitz and the Reagan, had reported coronavirus cases among sailors assigned to them, although they did not result in outbreaks aboard the ships, and one, the Truman, has been unable to return home due to the coronavirus.

Throughout the pandemic, the US military has emphasized the need to maintain readiness as countries like China, Russia, North Korea, and Iran continue to cause headaches.

Secretary of Defense Mark Esper said Monday that while the US is largely focused on the ongoing fight against the coronavirus at home, the US military is “still seeing all the same bad behavior out there that we saw before.”

“These are uncertain times,” Esper said. “You don’t know how states or militaries will act. So we got to remain vigilant out there on the front lines.”

Gen. Mark Milley, chairman of the Joint Chiefs of Staff, warned US service members last month that “many of our adversaries, as you know, are trying to exploit this crisis, so it’s important that we maintain readiness.”

The general added that it would be a “terrible and tragic mistake” for US adversaries and rivals to think they can get the better of the US “at a time of crisis.”

“As the forward deployed force of our country, we have a duty to ensure we are ready to respond. We cannot simply take a knee or keep everyone in port until this enemy is defeated,” Adm. Gilday said in a message to the fleet this week.

“We are America’s away team,” he continued. “The uncertainty caused by COVID-19 makes our mission of protecting America at sea more important than ever.”