Ford Aircraft Carriers Not Ready For F-35s, So Aging Vinson Gets The Call

The long road the F-35 took to finally being ready to deploy has forced the Navy’s new $13 billion carrier class to leave the plane behind — for now at least. 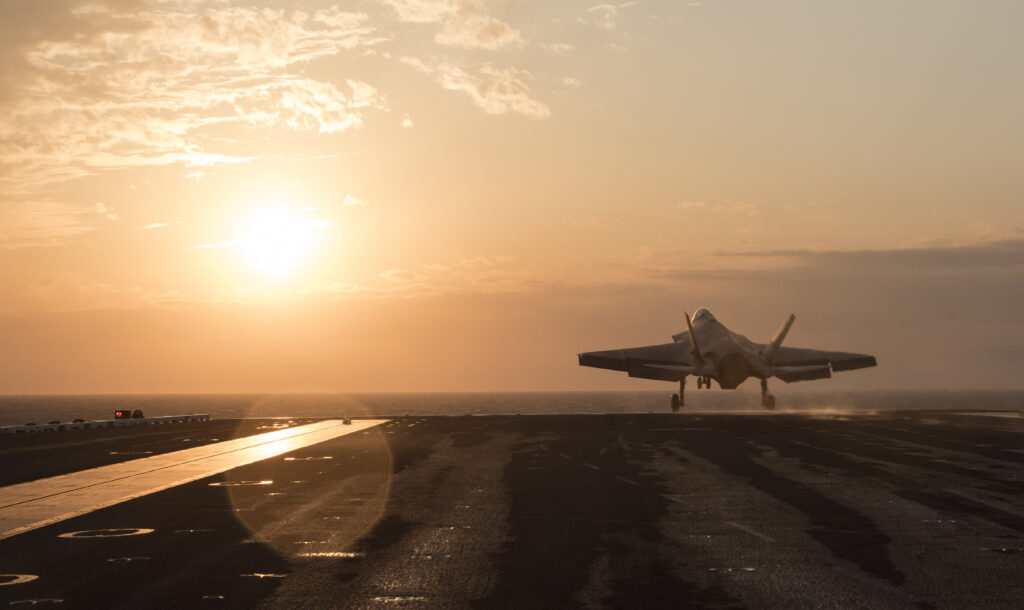 An F-35C takes off from the USS Abraham Lincoln in 2018 during training.

WASHINGTON: The Navy is upgrading one of its oldest aircraft carriers to be the first to fly the service’s newest plane, the F-35C, giving it a capability the service’s brand-new $13 billion carrier, the delayed and trouble-prone USS Gerald R. Ford, won’t have for years once it deploys.

Navy officials say the Ford and its follow-on carrier, the USS John F. Kennedy, are not being built to carry F-35s, and will have to undergo upgrades years after they’ve deployed. The plan is in keeping with a complicated maintenance and upgrade schedule the service has devised to marry ships with the Joint Strike Fighter as both become available.

The plane couldn’t have been included in the designs for the first two of four planned Ford carriers, one Navy official told me, because the F-35C’s final form was still a work in progress when the final design for the Fords was wrapping up.

That means the 36-year old USS Carl Vinson, which started its build under the Nixon administration and launched in 1983, will be the F-35s first home at sea. The ship is currently undergoing a $34 million refit in Bremerton Wash. until July 2020, followed by a 2021 deployment.

While both Nimitz and Ford-class aircraft carriers can operate with F-35Cs aboard, Navy spokesman Capt. Danny Hernandez said in an email, there are modifications to both carrier classes that are required in order to use all the data and information the F-35s can push out and receive, along with the addition of “additional classified spaces, some robustness of the ship for unique F-35 requirements (e.g. jet blast deflectors, etc.), but are not fundamental redesigns of any major components of the ship.”

Tabbed as the Navy’s first deployable F-35 air wing, Lemoore, Ca.-based VFA-147 Argonauts to deploy with the Vinson in 2021, accompanied by the Navy’s first squadron of Osprey tiltrotors, the Titans of Fleet Logistics Multi-Mission Squadron 30. The unit, created  in December, is the Navy’s first shot at replacing its C-2A Greyhound fleet. Crucially, the Osprey is able to haul the F-35’s heavy engines out to the ship, something the Greyhounds can’t do. Breaking D readers will remember that the Marines tested the V-22’s ability to carry the Pratt & Whitney F135s from another ship or a base.

The Ford, which Navy Secretary Richard Spencer insists will deploy before 2024 despite a host of issues facing its weapons elevators and the new electromagnetic systems aboard, just wrapped up a five-day sea trial where things appeared to be on track, after a 15-month sit pier side to continue fix its buggy new technology. The ship has blown past previous cost caps Congress placed on it, and is more than a year past its scheduled sail-away date.

The caps rose from about $10 billion in 2007 to $13 billion by 2018, all of which the ship has overshot, including a request in September for another $197 million in order to fix seven non-working weapons elevators. The latest request pushed the ship’s cost to $13.2 billion. Spencer has blasted Huntington and questioned the company’s ability to fix the ship’s weapons elevators, of which only four of 11 currently work.

Not building in F-35 capability on the first two ships “has always been the plan,” Hernandez said, adding F-35 capabilities will be built into the next two Ford carriers; the USS Enterprise slated to deploy in 2028 and the yet-to-be-named CVN 81, which will go to sea in 2032.

In January, the Navy awarded Huntington Ingalls Industries’ Newport News Shipbuilding a $24 billion contract for the two ships, compared to a predicted cost of $28 billion if the sea service had purchased them separately.

The Need For Carriers

“I have a demand for carriers right now that I can’t meet,” Navy Secretary Richard Spencer told reporters last week during a breakfast at the Heritage Foundation. “Every combatant commander wants carriers. So my job is to see how I can fulfill that requirement.”

The calls for carriers from commanders overseas has been a constant for decades, and the past two decades of back-to-back deployments to support ground wars in the Middle East have used up any spare capability the Navy had, leading to a situation like the one in Norfolk, where six carriers are undergoing refit at the same time. That includes the USS Truman, which is weeks past its planned deployment date due to electrical issues that has left the Navy and Huntington Ingalls scrambling to get the ship to sea.

There are other options. The Navy and Marine Corps are warming to the “lightning carrier” concept, designed to pack amphibious ships with Marine Corps’ F-35Bs and sail them to the hotspots to cover places the big decks aren’t.

“If, in fact, part of the mission of a carrier is presence, and forward deployablility, 20 F-35s is a great option to augment what the requirement might be,” Spencer said.

The USS America was recently photographed sailing in the Pacific with 13 F-35s on its deck, something that the services want to do more of as the so-called Gator Navy reinforces more decks to handle the fifth generation fighter. (The Navy refuses to call the smaller Marine ships aircraft carriers, although they are larger than carriers built in World War II and are, well, in plain English, aircraft carriers. Instead, they are known as amphibious ships, or LHAs.) The Marines and Navy are working on a new strategy to more closely align their operations, which would allow both to provide more punch, and give the Marines the ability to launch from both ships and from small ad-hoc land bases to support the fleet.

The Vinson’s first underway with the F-35 also tracks with the Royal Navy’s HMS Queen Elizabeth, which is slated to head to the Mediterranean and Middle East in 2021 with its own air wing of F-35Bs, along with a wing of US Marine Corps F-35Bs, a major first in deployability between the two longtime allies. The QE is currently underway off the US East Coast, where just last month it began launching and recovering British F-35Bs for the first time.