The Navy last week took another step foward in its transition to the next-generation fleet of logistics aircraft to support its carrier strike groups.

The service established Fleet Logistics Multi-Mission Wing 1, or COMVRMWING, at a ceremony on Oct. 10 at Naval Air Station North Island in Coronado.

Vice Adm. DeWolfe Miller, who commands Naval Air Forces, selected Capt. Dewon “Chainsaw” Chaney to command the new wing and become the first commodore who will oversee the manning, training, equipping and integration of the CMV-22B Osprey into fleet operations including cargo and passenger transportation.

The CMV-22B Osprey aircraft will replace the Navy’s aging fleet of twin-engine turboprop C-2A Greyhounds that serve as the carrier onboard delivery (COD) aircraft and have ferried passengers, equipment, gear and supplies from mail to spare parts around the fleet since the C-2A became operational in 1965.

The twin-engine, tilt-rotor Osprey has a vertical and short take-off and landing design and hovering capability that allows it to operate off ships’ flight decks and landing zones ashore. The “C” variant of the MV-22 Osprey, operated by a four-member crew, has advanced avionics and navigation systems and a larger fuel system for longer range than the Marine Corps’ variant. Its increased range, speed and payload provides the Navy with a boost in COD capabilities over the Greyhound, which comes and goes from shore to aircraft carriers through catapult launches off and tailhook trap landings. Whereas the fixed-wing Greyhound is limited to landing on the carrier, the V-22 can land on a range of smaller ships, making it a more flexible platform for moving people and goods around the sea.

In assigning Chaney as the wing commodore, the Navy selected a veteran helicopter pilot who’s tallied experience in several rotary-wing aircraft: the SH-60B and MH-60S Seahawk, the CH-46D Sea Knight and the MV-22 Osprey. He most recently commanded Helicopter Sea Combat Squadron 3 at North Island.

“This community’s stand-up is a joint endeavor and will bring unmatched capability to a carrier strike group near you,” Chaney said during the establishment ceremony, according to a Naval Air Forces news article. He called the Osprey “a game-changer to combat logistics in our carrier strike groups. We will uphold the high standards of naval aviation as premier warfighter enablers.”

The Navy established its first Osprey squadron, Fleet Logistics Multi-Mission Squadron 30, at North Island last year. The “Titans” of VRM-30 are scheduled for their first operational detachment deployment in 2021 on the aircraft carrier USS Carl Vinson (CVN-70), according to the Navy. This will likely coincide with Vinsontaking the F-35C Joint Strike Fighter on its first operational deployment, and the V-22’s ability to carry an F-35 engine to the aircraft carrier will prove out one of the reasons the Navy chose the Osprey as its next COD aircraft. 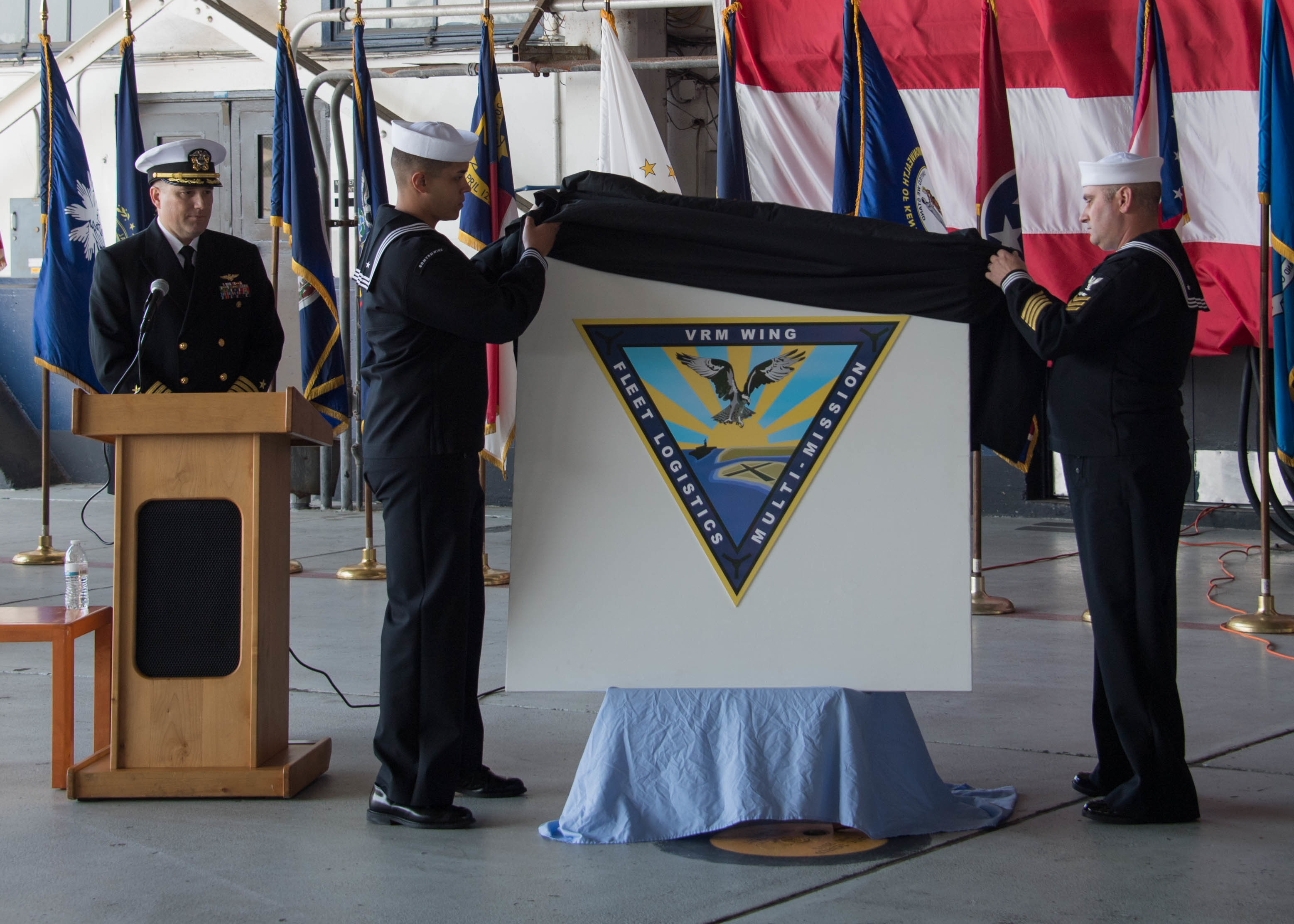 No CMV-22 Osprey is yet in the inventory, however. The Navy will get 39 Ospreys as part of a $4.2-billion contract the Pentagon issued to Bell-Boeing, the defense partnership that builds the V-22.

“Titans” crews are currently flying and training with Marine Corps-owned MV-22 Ospreys, and they are working with air crews and maintainers who repair the aircraft to become more familiar with its handling and operations ahead of getting hands on the first Navy aircraft. Squadron members will need to complete required training to get certifications before the squadron can become fully operational.

Plans to establish the second squadron – VRM-40 – on the East Coast are “in the works,” the Navy said. Each squadron will deploy detachments of aircraft and personnel to support carrier strike groups and task forces, just as the Navy’s VRC squadrons have supported the COD mission.

“The air wing of the future is coming. It’s coming to a theater near you, soon,” Miller told the audience at the ceremony.

“The aircraft carrier remains the centerpiece of naval power, and carrier strike groups bring unparalleled power to the fight,” Miller said. “No other weapons system, either in existence or on the drawing board, has the responsiveness, endurance, battlespace awareness, and the command and control capabilities of a nuclear-powered aircraft carrier, its embarked air wing and its accompanying ships.”

The maneuverability of aircraft carriers “make them the most survivable airfield in the world,” he said, adding they will be critical in a high-end fight but that they also require reliable sustainment to project that combat power. The Osprey COD will provide enhanced agility and a “24/7 capacity,” he added.

Officials expect the COD fleet will be fully transitioned to the Osprey by 2028.