All 6 East Coast Carriers In Dock, Not Deployed: Hill Asks Why

As the Navy scrambles to get enough parts and people to move carriers back out to sea, it’s facing a crowded waterfront at Norfolk. 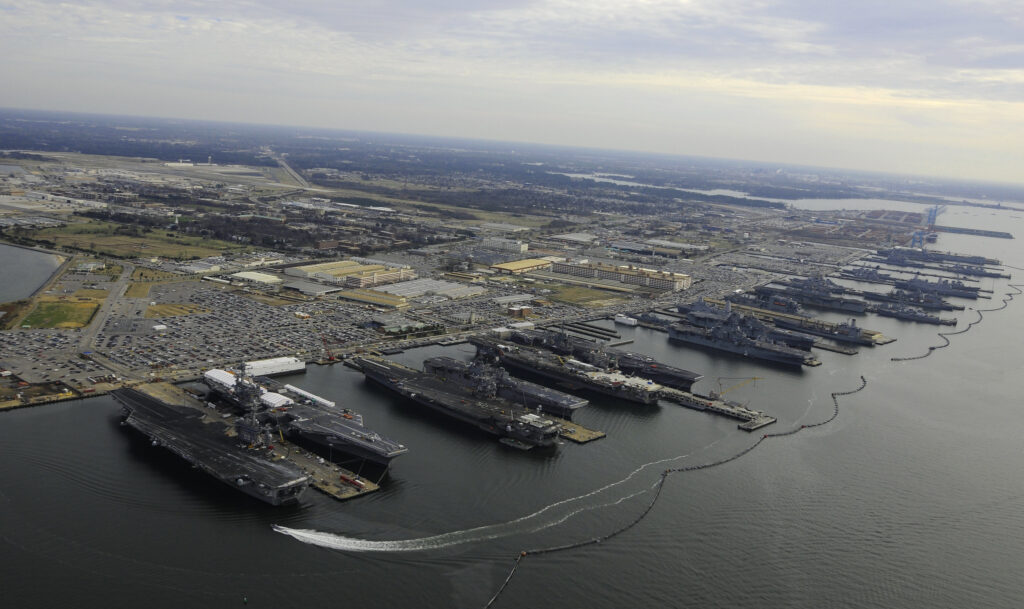 WASHINGTON: When the aircraft carrier USS Harry S. Truman missed a planned deployment last month after suffering major electrical problems, the only East Coast-based carrier currently capable of deploying was forced to head back to the dock.

As the Navy scrambles to get the Truman out to sea, it is pulling material and work crews from two other carriers undergoing their own long-planned refit and repair availabilities, though Navy officials say they don’t expect the Truman’s problems to affect those other repair efforts. As it sits pier-side in Norfolk, the Truman has plenty of company, joining an already crowded Norfolk waterfront where six of the Navy’s 11 carriers are currently tied up. At the time we’re going to print that means not one of the six carriers based in Norfolk are ready to be deployed.

One congressional staffer familiar with Navy issues called the fact that there are so many ships at Norfolk at the same time “unusual,” but said this has happened before. “How much of an issue this will be operationally will depend on how long the situation lasts,” the staffer said.

Normally, six carriers are based in Norfolk. Four are based on the West Coast, with two based in San Diego and two in Bremerton, Wash. The final carrier, the USS Ronald Reagan, is the only carrier based outside of the United States, in Yokosuka, Japan.

It’s unclear how long the Truman will be out of commission, but early estimates that it would be ready by the end of November might be too optimistic, according to a person familiar with the issue.

The Navy is “very concerned” about the Truman, Adm. Robert Burke, vice chief of naval operations said Friday at the annual Military Reporters and Editors conference. “Truman is on a good path to recovery, I think the engineers have done a fantastic job at troubleshooting a very unique problem, and correcting it.” Burke estimated the ship will be ready in “weeks, not months,” but didn’t elaborate.

Chris Miner, vice president for in-service aircraft carriers at Newport News Shipbuilding — a division of Huntington Ingalls Industries, which is doing the repair work on all of the carriers — told me that in order to get the Truman up and running, the company has “pulled some material” off the carrier USS George Washington “so they can get [Truman] fixed.”

The Truman’s challenges are one symptom of a larger problem — the Navy is finding it increasingly difficult to deploy carriers and keep them on station as the Pentagon says it is working to meet the challenges of two peer competitors, China and Russia. Beijing in particular is rapidly modernizing its navy, including building several aircraft carriers and new classes of destroyers.

Navy Secretary Richard Spencer noted the emerging challenges last week when he sharply criticized one of the most knowledgeable House members on Navy issues, Rep. Elaine Luria, for pointing out how many carriers are available and questioning work on the Ford class of carriers, this is beginning to attract congressional attention.

“Leaders in Congress who make disparaging comments against a platform [for which] we’re developing new technologies — you could not ask for a better disinformation program for our competitors,” Spencer said Wednesday at the Brookings Institution. “And I truly mean that.”

The Truman’s issues are being felt through the 11 carrier fleet.

The USS George HW Bush pulled into Norfolk in February for a 28-month overhaul that will keep it off the high seas until the early 2020s. But Huntington Ingalls says it has moved a handful of workers assigned to the overhaul to the Truman, amid “some concern about pulling those folks over to go do that work,” according to Miner. “We’re taking a look to see if there is any opportunity to help [the Navy] out, we don’t want to have an impact” on work on the Bush. “We’re doing whatever they need us to do to help them.”

A Navy spokesperson told me in an emailed statement Monday the service “does not expect any delays to other ships due to the restoration work aboard HARRY S. TRUMAN.”

Earlier this month, the USS George Washington was put back in the water as part of its mid-life refueling and overhaul, which has been underway since 2017. Work is more than halfway complete, and the ship should be ready in late 2021. Huntington has also “pulled some material” off the Washington to assist the Truman, according to the company.

Any slip in the Washington’s schedule would be bad news for the USS John C. Stennis, which pulled into Norfolk in May to begin its own years-long mid-life refueling, but will have to perform other tasks along the East Coast while waiting for Washington to make room in dry dock.

As the Washington is finishing up, the Bush is working through its overhaul, and the Stennis waits to begin hers, Huntington’s Newport News shipyard is looking at “one of our largest overlaps” in years, Miner said. “There’s some challenges that we’re working through” he added, “we’ve had some overlap in the past but nothing quite like this…it’s nothing we can’t overcome.”

According to information from the Navy, here’s the state of play for the Norfolk carrier fleet:

That effort to get multiple carriers through their lengthy and complex overhauls comes as Navy Secretary Spencer is publicly slamming Huntington Ingalls over delays in deploying the Navy’s next-class carrier, the $13 billion USS Gerald R. Ford.

“Faith and confidence of senior management” at Huntington “when it comes to this project is very, very low,” Spencer said Wednesday at the Brookings Institution.

Originally slated to be ready to sail in 2018, the Ford isn’t expected to deploy until the early 2020s, something Spencer laid squarely at the feet of Huntington for not getting critical systems to work on schedule, and Congress for failing to pass budgets on time. The ship did leave port on Friday for a new round of sea trials, which were originally scheduled to take place in July. The delay came after engineers were unable to get the ship’s new electromagnetic weapons elevators to work, after the Navy and Huntington Ingalls installed the new technology without first testing it on land.

By the time Ford left the dock, only four of its 11 weapons elevators were working, a black eye for Spencer after he boasted of telling President Trump that he could fire him if all eleven weren’t up and running by the time the ship leaves port. Spencer visited the ship at sea over the weekend to check on its progress. 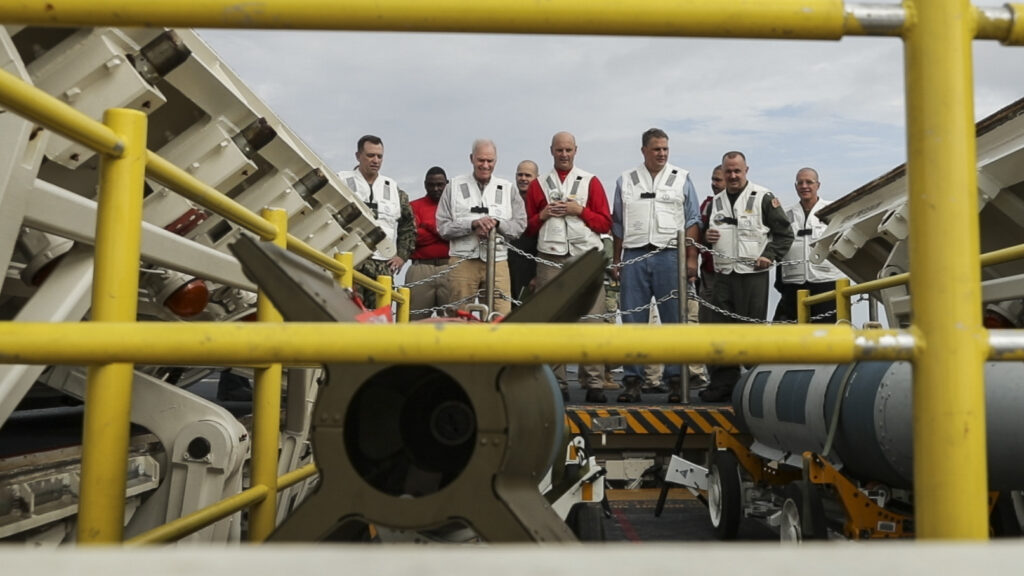 After Spencer criticized Rep. Luria last week over her pointed questions to Navy leadership over the problem getting carriers out to sea, Luria shot back, “I find it disappointing that the Secretary finds Congressional oversight disparaging.”

In a statement released after the hearing, Rep. John Garamendi, chairman of the House Armed Services Readiness subcommittee, backed Luria. “I applaud Congresswoman Luria for conducting appropriate oversight of the matter and working to improve processes. Secretary Spencer’s comments were unwarranted and contrary to the important constitutional obligation Congress has to conduct oversight.”

Speaking with reporters Friday, Navy Undersecretary Thomas Modly admitted to “frustrations we have with industry,” but added, “we as a Navy and Department of Defense have a lot to be held accountable for with the Ford, but what the secretary is trying to say is the Navy that gets blamed for this and there’s a shared responsibility,” with Congress and industry. “I know all the people at Newport News are doing everything they can, but they’ve struggled” with the program.

With questions swirling around Truman, and the Stennis just off a long deployment and likely unable to undertake another given the need for repair and refueling its nuclear core, the ship closest to deploying is the USS Dwight D. Eisenhower, which earlier this month wrapped up its last round of pre-deployment testing, including drills on the ship’s ability to integrate with other ships within a carrier strike group. But the ship still has to run through a Composite Unit Training Exercise, meaning it is weeks or months from deploying.

One carrier crew that is looking for some help is the USS Abraham Lincoln, which is at the end of its planned seven-month deployment and is currently in the North Arabian Sea supporting Central Command. Slated to return to San Diego by the end of the month, the ship, as of Wednesday, was still operating in the Middle East, fueling speculation that it will remain deployed until a replacement arrives.

While the US might be in a carrier crunch, it won’t last forever. The Ford will deploy in a few years, followed closely by the second in the Ford-class, the USS John F. Kennedy. To help patch any holes there might be in future carrier coverage and provide more ships that carry aircraft, the Navy and Marine Corps are rapidly warming to the concept of a “lightning carrier” concept, designed to pack amphibious ships with Marine Corps’ F-35Bs and sail them to the hotspots to cover places the big decks aren’t. 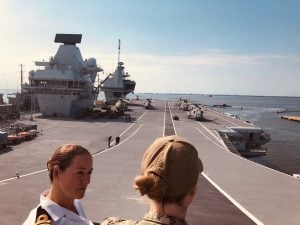 HMS Queen Elizabeth from top of her ski ramp at Norfolk

For example, the USS America (not a carrier to the Navy) was recently photographed sailing in the Pacific with 13 F-35s on its deck, something that the services want to do more of as the so-called Gator Navy reinforces more decks to handle the fifth generation fighter. The Marines and Navy are working on a new strategy to more closely align operations, which would allow both to provide more punch, and give the Marines the ability to launch from both ships, and small, ad-hoc bases on land to support the fleet.

In addition, the British Royal Navy will soon boast two new F-35-capable aircraft carriers, allowing the UK to take some of the load off the US Navy in keeping carriers sailing in as many places as possible.

For the moment, however, the Navy’s 10 big deck carriers are carrying the load, and the price of two decades of long, punishing deployments, along with a holiday from carrier construction, has caught up with it.