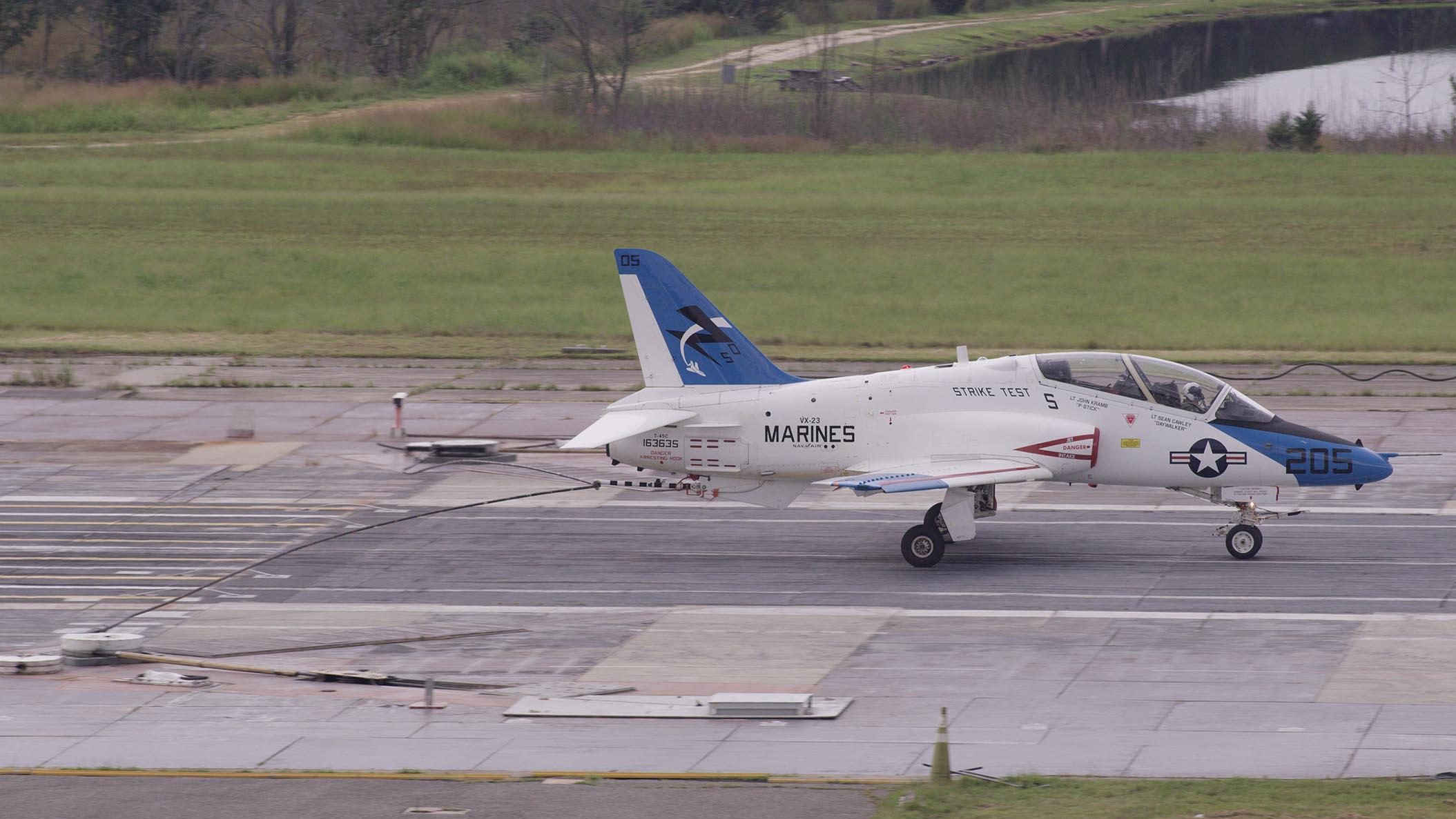 This post was updated to say the 60 Goshawk arrested landings at the Runway Arrested Landing Site (RALS) occurred in April. An earlier version included the wrong month.

The Navy and Marine Corps will soon be able to train their newest pilots aboard the newest aircraft carrier, as Naval Air Systems Command makes progress integrating the T-45C Goshawk trainer with the Ford-class carrier arresting system.

The Navy is currently evaluating how the Advanced Arresting Gear (AAG) operates on Goshawks and expects the trainers will be ready to join USS Gerald R. Ford (CVN-78) when it is expected to begin conducting flight operations in early 2020.

The Navy’s evaluation process requires engineers to study how AAG interacts with each type of airplane individually. In April the Goshawk completed 60 arrested landings at the Runway Arrested Landing Site (RALS) at Joint Base McGuire-Dix-Lakehurst, N.J. The Navy expects the Goshawk to complete an additional 145 arrested landings at the New Jersey-based RALS, Connie Hempel, a spokesperson for the program executive office for tactical aircraft programs PEO(T) at Naval Air Systems Command, told USNI News.

“Upon test completion, a period of data analysis will ensue, and by the end of this year an Aircraft Recovery Bulletin will be generated which will authorize the shipboard landing of the trainer aircraft,” Hempel said in an email to USNI News.

General Atomics built the AAG. Development of the system has had some turbulence. Early versions of AAG installed at test facilities fell short of required reliability levels. An extensive redesign delayed land-based testing in New Jersey by two years, which pushed back testing aboard Ford by four years, USNI News previously reported.

AAG and the Electromagnetic Aircraft Launch System (EMALS) are new technologies aboard Ford-class carriers that are intended to save the Navy money and improve lethality. Navy officials expect the two systems will increase sortie generation by 25 to 30 percent over the current sortie rate aboard Nimitz-class carriers. The two new systems are also smarter than those they replace, tailoring the amount of force they use to launch and catch airplanes based on the aircraft type, therefore eliminating excess pressure on the airframes and reducing damage to the aircraft over their service life.

When the Navy generates a Goshawk Aircraft Recovery Bulletin, Goshawks will be authorized to land on the newest aircraft carrier.

Getting the T-45C approved to land on Ford is an essential step for the Navy and Marine Corps. As Ford-class ships join the fleet, new pilots will need to complete their training onboard these carriers.

“The next phase of CVN-78 flight operations is presently slated for early 2020 which will include the T-45C in addition to the C-2A Greyhound, E-2C/D Hawkeye/Advanced Hawkeye, F/A-18E/F Super Hornet, and E/A-18G Growler aircraft,” Hempel said in an email to USNI News.