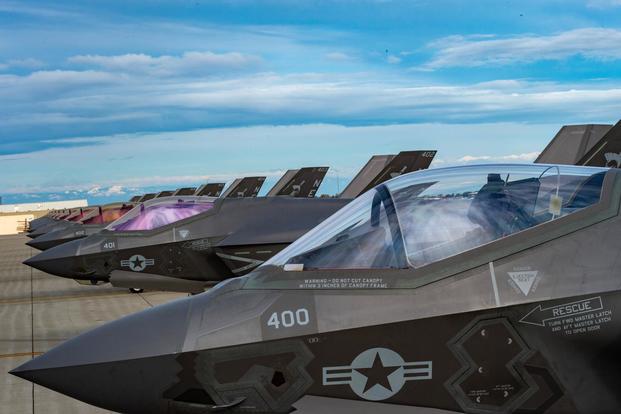 Editor’s Note: This story has been updated with comments from Lockheed Martin Corp. that came after press time.

A government watchdog organization says that the Navy’s F-35 Joint Strike Fighter isn’t ready for combat, even though the service signed off on the aircraft’s initial operating capability status last month.

Veterans wanted at AILOpportunity Unlimited puts you in control of your career.

The non-profit Project on Government Oversight said the F-35C variant “continues to dramatically underperform in crucial areas including availability and reliability, cyber-vulnerability testing, and life-expectancy testing,” according to a recent analysis conducted by the organization.

“The fact that the Navy is pushing ahead with the aircraft in spite of evidence that it is not ready for combat and could therefore put at risk missions, as well as the troops who depend on it to get to the fight, comes at the same time as the Pentagon’s annual operational testing report for fiscal year 2018 shows that the entire F-35 program, the most expensive weapon system in history, is not ready to face current or future threats,” POGO analysts wrote.

The Navy referred all questions about the new report to the Pentagon’s F-35 Joint Program Office, which did not immediately provide responses to questions.

The Navy previously said its F-35 “met all requirements” to achieve initial operational capability, or IOC, announcing the status Feb. 28, the last of the three U.S. services that fly the aircraft to declare the plane as combat-ready.

In a statement, Lockheed Martin said the the F-35C and F-35B fleet were both delivering strong performances.

“As more aircraft enter service, we are optimizing resources across the fleet and leveraging data across hundreds of thousands of flight hours to identify and invest in the biggest drivers to improve readiness and reduce costs,” Lockheed said in the statement. “For example, we are improving supply availability and turnaround time; further enhancing system reliability and maintainability; implementing advanced analytics tools; enhancing [the Autonomic Logistics Information System]; conducting supply chain competitions; buying parts in bulk up front; accelerating modifications of earlier aircraft; and supporting the stand-up of regional warehouses and customer repair depots.”

The statement added that mission capable rates were increasing as F-35 sustainment processes mature and personnel become more familiar with the aircraft.

“We are confident in meeting the DoD’s readiness and cost goals,” Lockheed said.

POGO heavily cited a report by the Defense Department Director of Operational, Test and Evaluation, assembled by December 2018 and released publicly on Jan. 31.

POGO’s analysis of the charts noted DOT&E’s findings that the Marine Corps’ early-production short-takeoff-and-vertical-landing jets “[are] well under the expected service life of 8,000 flight hours, and may be as low as 2,100 flight hours,” which could result in the fifth-generation jet hitting its flight hour maximum by 2026.

Like the Air Force, the Navy is working to reach former Defense Secretary Jim Mattis’ established goal of reaching an aircraft mission-capable rate of 80 percent by the end of this fiscal year.

“The Navy document POGO obtained shows that the problem persists: the Marines‘ F-35B and the Navy’s F-35C variants posted even worse figures in 2018 than in the previous year,” the report said.

The Navy already has just 27 jets received of a total requirement for 273 carrier-capable aircraft. The mission-capable rates do not apply to its jets that are also in test, training or in depot.