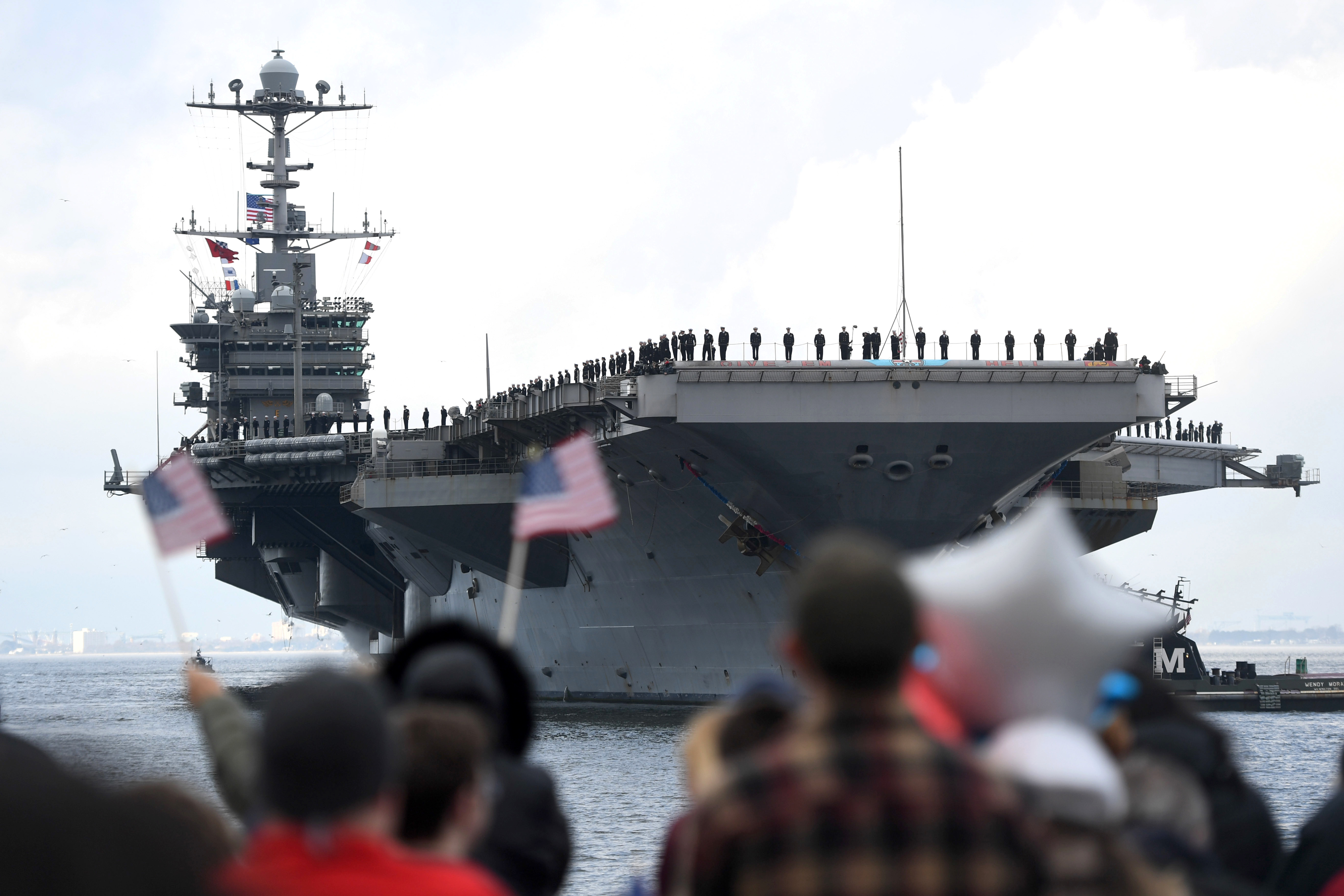 Family and friends wait on the pier for Sailors aboard the Nimitz-class aircraft carrier USS Harry S. Truman (CVN-75) to return to Naval Station Norfolk, Va. on Dec. 16, 2018. US Navy Photo

This post has been updated to include comments from Rep. Adam Smith (D-Wash.), chairman of the House Armed Services Committee.

The Navy’s plan to retire USS Harry S. Truman (CVN-75) decades early, instead of bringing the aircraft carrier in for its scheduled refueling and complex overhaul, is high among Thornberry’s concerns.

“We need to talk to the Navy about their reasoning, and why they think that this is the right trade-off to make and the kinds of capabilities we will need in the future,” Thornberry, ranking member on the House Armed Services Committee, said on Tuesday afternoon.

Under the FY 2020 budget plan, when Truman’s nuclear fuel is spent later in the 2020s, the ship would be taken out of service, leaving the Navy with 10 active carrier strike groups.

Earlier Tuesday, the decision to skip Truman’s refueling was described as saving about $3.4 billion in procurement costs during the Navy’s five-year Future Years Defense Program (FYDP), Deputy Assistant Secretary of the Navy for Budget Rear Adm. Randy Crites told reporters during a media briefing at the Pentagon.

Allowing Truman to run-down its current fuel would also save the Navy about $2 billion in procurement costs beyond the FYDP and about $1 billion in operations and maintenance costs, according to Pentagon estimates. However, Crites said the decision to shrink the carrier force is not budget-related, but instead a suggestion that comes from the Navy’s force structure assessment (FSA), expected to be released later this year.

The FSA is not expected to dramatically alter the Navy’s target to build a 355-ship fleet or make significant changes in force structure, Vice Adm. William R. Merz, the deputy chief of naval operations for warfare systems (OPNAV N9), said during a November Senate Armed Services subcommittee on seapower hearing. Merz’s office reviews every Navy strategy document released to determine whether there’s a change in the underlying philosophy of operating forward deployed ships in multiple locations.

“We don’t anticipate a significant change in force structure by the FSA,” Merz said in November. “Beyond that, then it’s threat driven. What type of ships, what presence do we need? All that’s laid out in the National Defense Strategy, and right now we don’t really have any indication we’ll be coming off our 355 number. If anything, it’s going to continue to grow.”

Speaking Tuesday, Thornberry said Congress, the Navy and Pentagon leadership have had this debate before. Five years ago, the Navy and the Pentagon proposed in the FY 2015 budget to skip the scheduled refuel and complex overhaul of USS George Washington (CVN-73) and running the ship until its fuel ran out before retiring it early.

“We had this issue come up a few years ago, and it was our judgment at that point that we needed to go ahead and refuel,” Thornberry said.

Thornberry is willing to hear the Navy’s reasoning, but he expects details including what capabilities the Navy loses if the number of carrier strike groups drops to ten.

“Ok Navy, you have made these choices, come explain them to us,” Thornberry said. “And maybe part of their explanation involves carrier vulnerability; maybe it involves what more they want to do and they’re taking this money that would be required for refueling to do this.”

If Congress disagrees with the Navy’s plan, Thornberry said the pressure for answers and sources of future-year funding shifts to Capitol Hill.

“Then the challenge for us is, Ok, we disagree with their judgment, where do you get the money to go ahead and do it,” Thornberry said. “And I don’t think this year it’s a big deal because they’re just looking for some advance procurement.”

The Navy is not alone when it comes to the need to provide more explanation. Thornberry also wants to hear more from the Air Force behind their thinking to request $1 billion to buy eight F-15EX fighters in addition to 48 F-35A Lightning II Joint Strike Fighters.

Thornberry is concerned the Pentagon’s is relying too heavily on the Overseas Contingency Operations (OCO) fund. The White House’s FY 2020 national security budget request is for $750 billion, with $165 billion – roughly 22 percent – coming from OCO the fund. In comparison, Congress appropriated a total of $68.8 billion in OCO funding last year.

“We’ve gotten to the point where the OCO was always a little bit fuzzy in terms of using it to fund things that might not necessarily have bene part of the overseas contingency operations, but now they’ve eliminated any pretense. They’ve actually divided up the OCO into real OCO and then base OCO,” Smith said about the Pentagon’s budget proposal. “I don’t know who coined this term, but I love that person, it’s FOCO – it’s fake OCO and I think we ought to write that into the budget.”

Inside the OCO funding request is roughly $7 billion intended for emergency funding, which Smith said lawmakers are interpreting to mean money to pay for building a wall along the U.S. border with Mexico. There’s not much support on Capitol Hill for using OCO funds to pay for the wall, Smith said.

“Ranking member Thornberry came out yesterday and said that he does not support funding the border wall out of department of defense budget. There’s bipartisan opposition to doing that and our bill will not fund that,” Smith said.

Overall, the White House budget request is an opening offer, Smith said. The military wants to buy a lot of equipment, the challenge is working with the Pentagon and White House to fund and prioritize those purchases.

“How does the White House work its way back to something that’s sensible,” Smith said. “And if they don’t, we’re staring at possibly another shutdown or best-case scenario another CR (continuing resolution) and a delayed defense budget. So that overhangs everything we’re doing.”

The Pentagon’s top-line number of $718 billion is the minimum required to fund the military, Thornberry said. Instead of using OCO funds to pay for enduring costs as a way to get around spending caps in place from the Budget Control Act of 2011, both Smith and Thornberry say Congress needs to work out a budget deal to adequately fund the military without gimmicks.

“There’s got to be a budget deal, everyone knows it,” Thornberry said. “My point is there’s no reason to wait. Things are not going to get clearer. It’s not going to get any easier. Elections get closer, and you’re always going to have 74 Senators running for President, so let’s get it down now.”