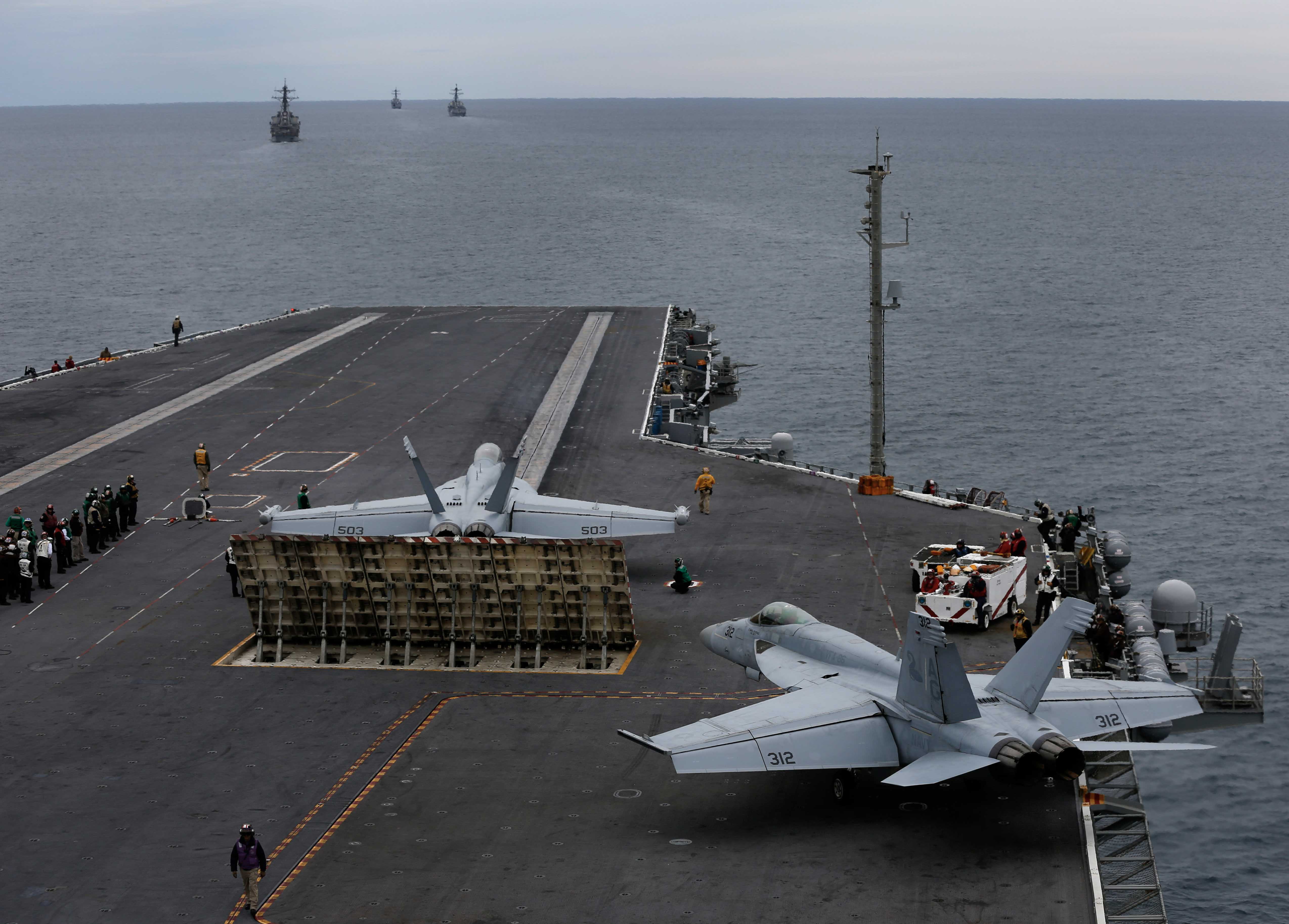 ABOARD USS ABRAHAM LINCOLN, IN THE VIRGINIA CAPES OPERATING AREA – The Abraham Lincoln Carrier Strike Group is underway for pre-deployment training after reaping the benefits of several high-end training opportunities in the last several months.

The Lincoln Strike Group has already seen more sophisticated operations than most going into its month-long Composite Training Unit Exercise (COMPTUEX), thanks to the ABE CSG combining with the Harry S. Truman CSG to form a carrier strike force for high-end training last summer. And with the addition of live, virtual and constructive (LVC) training leading up to and during COMPTUEX, strike group leadership is confident the ships and air wing will be ready to tackle anything the deployment throws at them.

“We live in a dangerous, rapidly changing and complex world, and so our nation expects our Navy to be ready. In order to be ready, we’ve got to practice, and we need to work hard and we need to train hard,” Rear Adm. John Wade, commander of Carrier Strike Group 12 and the Abraham Lincoln Carrier Strike Group, told reporters Monday aboard USS Abraham Lincoln (CVN-72).

Leaders throughout the strike group say that COMPTUEX today represents a significant leap in sophistication and difficulty over previous COMPTUEXs – in part due to the increased use of LVC training tools.

Lincoln Commanding Officer Capt. Putnam Browne told reporters that Carrier Strike Group 4, which oversees training and certification of deploying strike groups, can now set up scenarios at sea against virtual adversaries that the carrier sees in its combat system but are not actually in the water. CSG-4 can also virtually enhance a live ship, airplane or submarine – so that a live U.S. Navy ship can be in the water coming towards Lincoln, for example, but the effects they produce can be simulated to better represent an adversary’s ship, he said, forcing the carrier to defend itself against something that resembles a real-world threat. 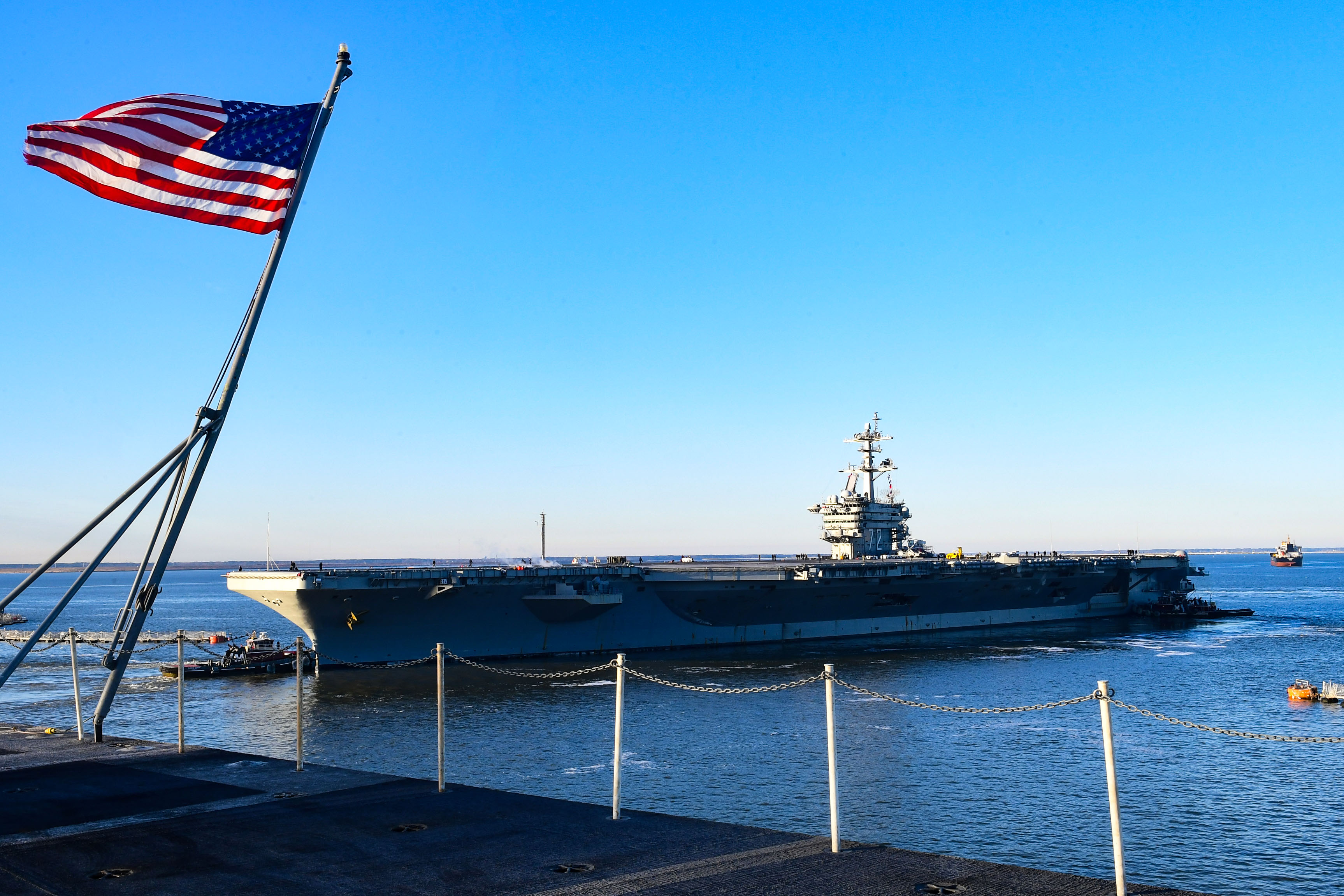 Capt. Chris Follin, deputy commodore of Destroyer Squadron 2 embarked aboard Lincoln, told reporters during the media embark that “I used to work at [Carrier Strike Group] 4, and the COMPTUEX we built then is not the same as it is today. It’s better by 100 times now than it was then. And part of that is the classroom virtual piece that you’re talking about. We’re able to come out here and utilize [opposition force] ships that are actual ships, physical ships we see, and we’re also able to get virtual addition to them that takes us to the higher-end fight … that we need to be ready for when we go overseas.”

Capt. Bill Reed, Carrier Air Wing 7 commander, added during the interview that the COMPTUEX would weave together a “very robust adversary force” that included several U.S. Navy aviation squadrons, several ships, and some U.S. Air Force units, in addition to virtual adversaries being simulated in the waters.

“We will get the high-end adversary and we will get that high-end training both virtually as well as in reality,” he said.

This mix of live and virtual training in a high-end COMPTUEX helps the Lincoln Carrier Strike Group “to think quicker, to be more agile, to be more versatile in the way that we fight,” Reed said. Carrier Strike Group 4 trainers and the adversary force they control are a thinking enemy like the Navy would face during a future conflict, and “that will stress our ability not just to plan or execute but then also to think about what our competitor is doing, and that will help us at the major commander level to be more agile and help our forces to get out there and be ahead.”

Ahead of this new and more challenging type of COMPTUEX, various parts of the Lincoln Strike Group have had unique opportunities to gain at-sea and high-end training to boost proficiency going into this pre-deployment training event.

Lincoln and Carrier Air Wing 7 had a chance to conduct high-paced operations at sea in August, when the F-35C Joint Strike Fighter was brought onboard and incorporated into cyclical air wing operations. The entire strike group came together for carrier strike force operations alongside the Harry S. Truman CSG in late August and September, which “allowed us to do different tactics that you can’t do when you’re just operating by yourself,” Wade said. Then the strike group’s surface combatants had their own crack at high-end operations during the first-ever Surface Warfare Advanced Tactical Training (SWATT) to be held on the East Coast for cruisers and destroyers.

“What that allowed us to do was to bridge the basic phase, where it’s unit and individual training, into this exercise, which is the integrated phase. So it allowed us to operate together earlier. … It gave us the ability to ensure our communications were working, to flex our sensors and weapons, to give us more confidence in the material condition but also the tactics that we’re going to use here for this exercise,” Wade told USNI News. Before taking command of the Lincoln Strike Group last year, Wade commanded the Naval Surface and Mine Warfighting Development Center, which conducts the SWATT training events. 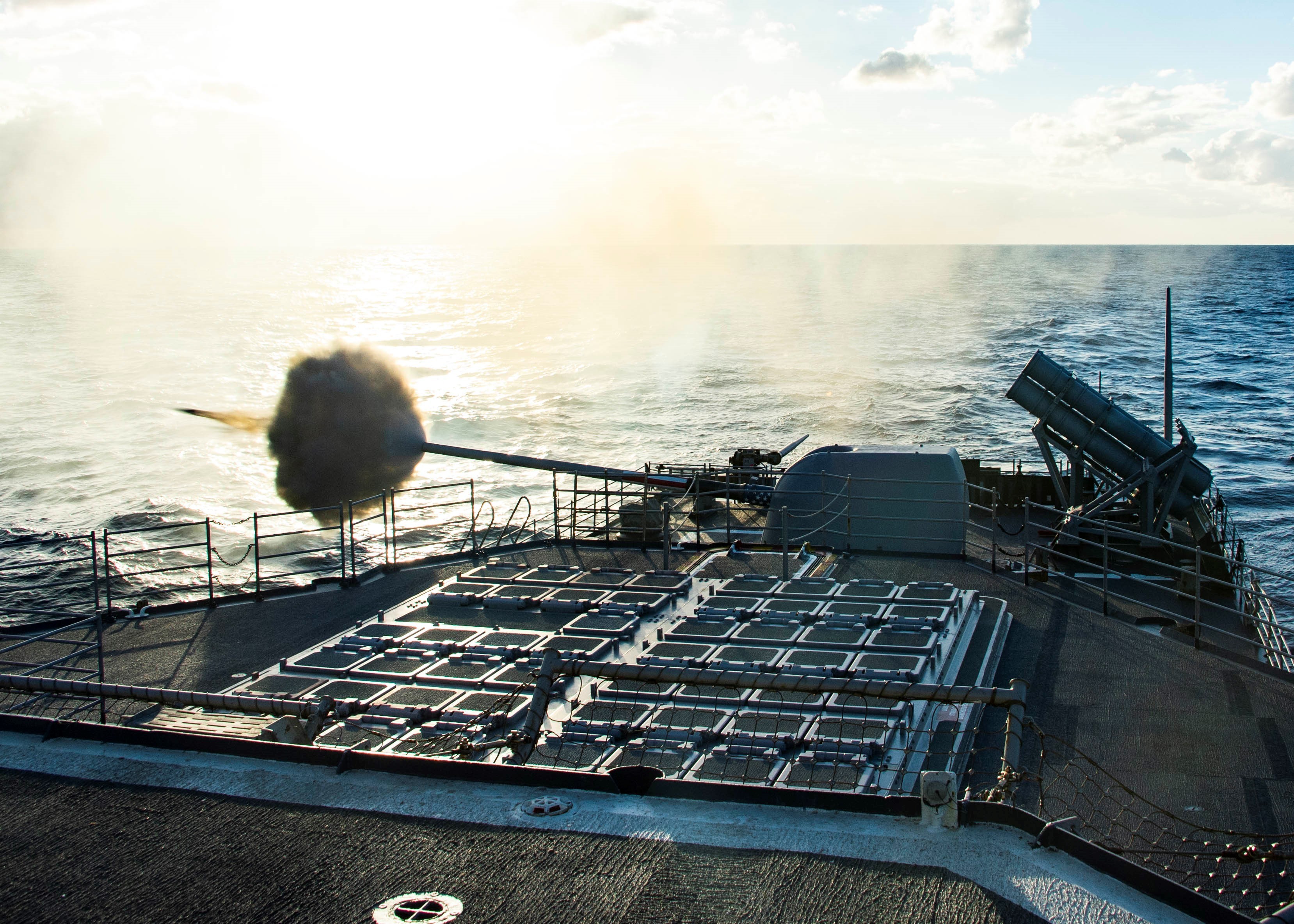 Follin, the deputy DESRON commodore, said that “the wing has Fallon in Nevada where they go out and sharpen their sword to fight. For the surface community, we now have SWATT. So we go out and conduct exercises at sea to prepare us for the integrated phase we’re in now and the advanced training phase. So it’s more high-end training so we can learn faster and get better at what we do in the surface navy, and more opportunities to go out to sea and do live training. And it’s been very beneficial to us to get ready for the COMPTUEX.”

He praised the addition of SWATT, saying that classroom training for the surface ships is a fine start to the pre-deployment process, “but to go out and put hands on the equipment and actually use it underway at sea is the most valuable training that they’re going to receive” to prepare sailors to come together with the rest of the strike group in COMPTUEX.

“The more we can train and the harder we can train, then we’re more ready for the contingencies that could come our way. And also it makes us more proficient in just presence operations and providing stability and security throughout the world,” Wade said of the more sophisticated training his strike group has had access to this deployment cycle.
“[SWATT] allows us to flex those (advanced) tactics and to really work harder in all the different domains … so that we’re ready wherever we’re operating. And that also contributes to DFE, Dynamic Force Employment, which then allows us to be able to go wherever the nation needs us and be ready to operate.”

Under Dynamic Force Employment, the Navy is pushing the idea that its deployed ships will not operate as predictably as they have in past years, and could end up conducting any type of mission in any location. Under DFE, USS Harry S. Truman (CVN-75) skipped the Persian Gulf altogether and conducted only a brief period of airstrikes on Syria from the Mediterranean – opting instead to focus its time on operations in Europe, including in the Arctic.

“Senior leaders have been very very clear that they expect our Navy to be more lethal and more tactically proficient. And we need to be that because we live in a competitive environment where our security interests – not only of the United States but those of our allies – are being challenged across the globe. So the exercise really has evolved to really challenge us in every different domain – not just power projection (against land targets in the Middle East), like you just referenced, but that we can operate in the open ocean, anywhere around the world and in any type of mission set. And that’s why I’m excited, because it’s challenging us to be good in all those different areas,” Wade said of the hand-in-hand adoption of Dynamic Force Employment and the increasing difficulty of COMPTUEX.
“COMPTUEX continues to evolve, and it is becoming more challenging. But I’m embracing the exercise because if it’s challenging, it makes us work harder, makes us more prepared and ready, and gives us the competence so that we can operate and execute our mission wherever we need to go.” 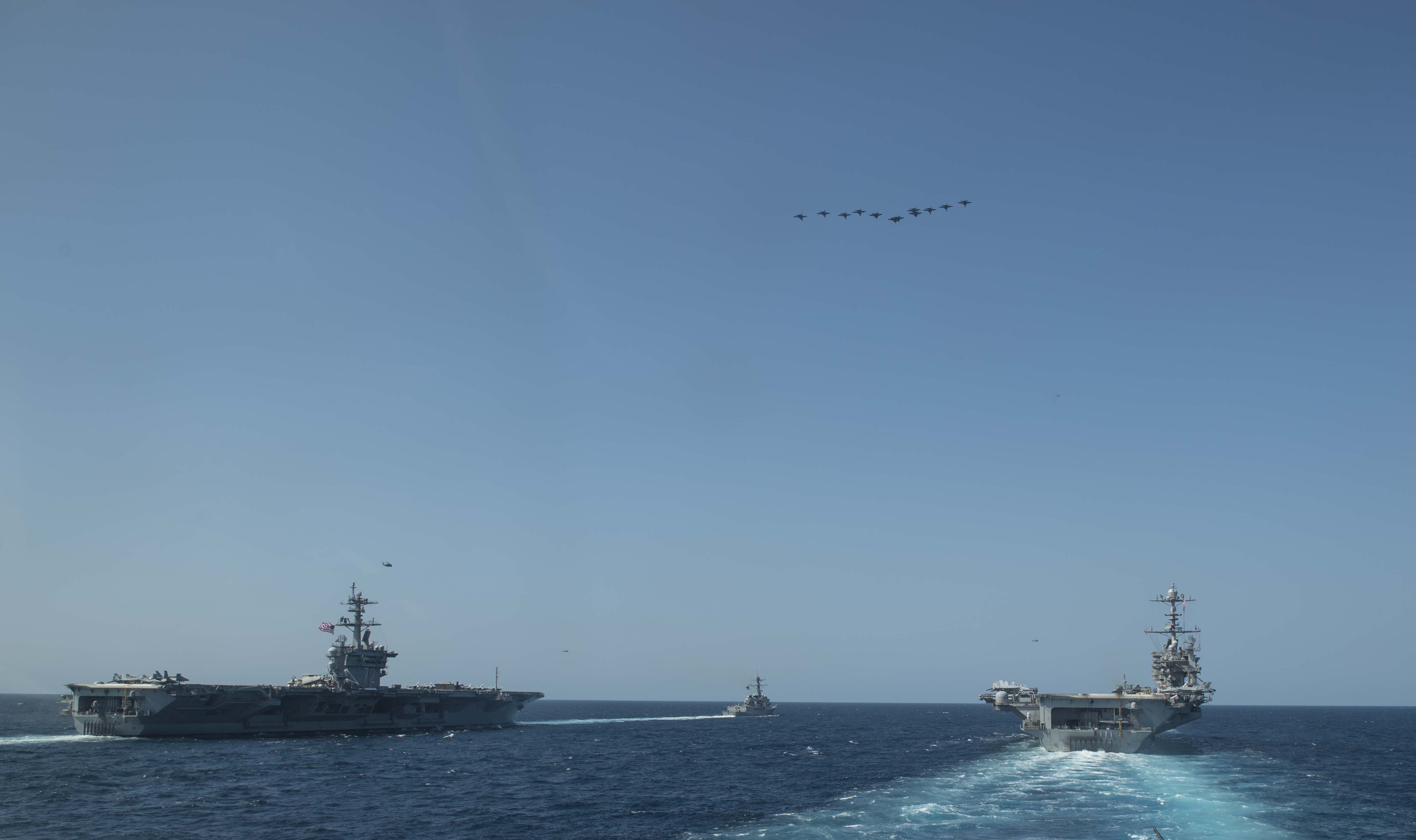 The high-end focus of COMPTUEX is not the only notable feature of the Lincoln Carrier Strike Group’s predeployment workups.

This will be Abraham Lincoln’s first deployment in about seven years, after undergoing a mid-life Refueling and Complex Overhaul from March 2013 to May 2017. The COMPTUEX is the first pre-deployment workup conducted under the command of the new U.S. 2nd Fleet. And the strike group will be the first to deploy with an information warfare commander, an advisor to the strike group commander on par with the traditional air defense commander and sea combat commander.

Additionally, the carrier is also making preparations for a homeport change. Once the ship departs Norfolk, Va., this spring, it will conduct a normal deployment through U.S. 6th Fleet and U.S. 5th Fleet but then transit through the Pacific and return to San Diego, where Lincoln will then be homeported. 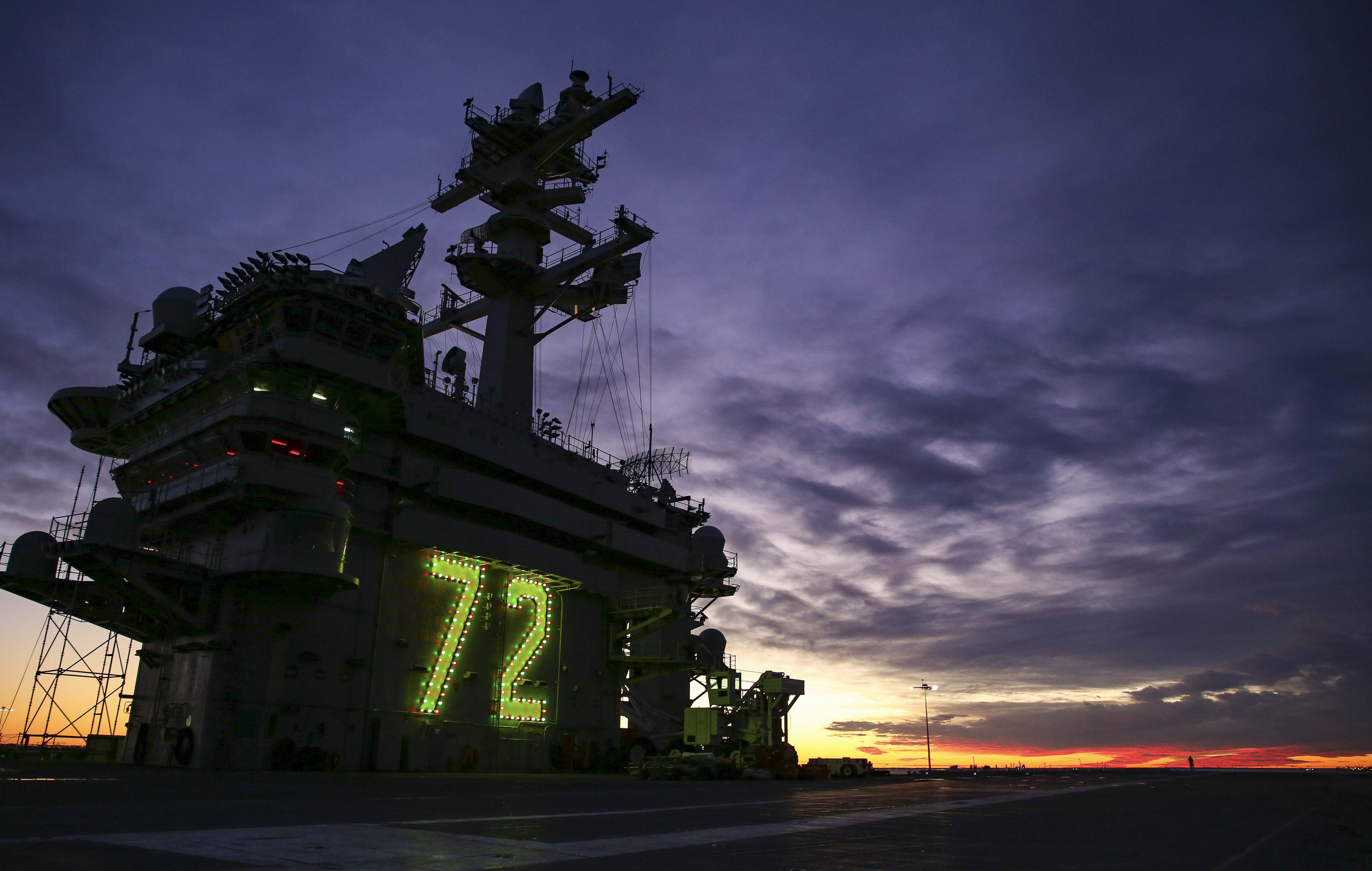 Browne, the Lincoln commanding officer, said this homeport shift is modeled after what USS Theodore Roosevelt (CVN-71) did following its own RCOH, which the Navy found to be a successful model.

“Do the full set of workups on this coast, do a regular deployment, and then wind up on the other coast. It’s a little bit tough because you do have to move the sailors” and their dependents, Browne said, “but we have a phenomenal administrative department, and the folks in Millington have really been bending over backwards – in fact everyone has … to get this homeport change put through.”