This post has been updated to include a statement from U.S. Pacific Fleet.

The deployment is the first for Marine Joint Strike Fighters from the U.S., following a short float of Japan-based “Green Knights” of VMFA-121 on the forward-deployed amphibious warship USS Wasp (LHD-1) in March.

The Marine F-35Bs aboard Essex are set to bring a drastically expanded set of capabilities to the ARG/MEU beyond the more-than-30-year-old design of the AV-8B Harrier II that makes up the bulk of the Marines’ strike inventory.

“With the new aircraft, we want to be able to capitalize on all the capability that aircraft has to bear, like multi-functional data links, how do we get that information from that airplane to the ship so we can use it,” Capt. Gerald Olin, Amphibious Squadron 1 commander and commodore of the Essex ARG, said in February. “That also gives me additional command-and-control capability.”

While the Marines have widely publicized the F-35Bs on Essex, the departure of the ARG/MEU was not announced publicly before the ships left San Diego. Typically, the service alerts media in advance of deployments for those interested in covering the departure events, as well as sends a separate announcement once the ships formally deploy. Numerous social media posts on Facebook and Twitter – posted by private citizens, not military-affiliated accounts – showed sailors and Marines manning the rails of the ships of the ARG as they departed San Diego. 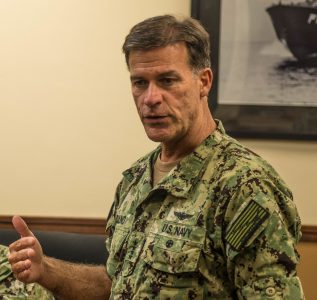 The decision to not announce the departure of the about 5,000 sailors and Marines were made at the discretion of the new U.S. Pacific Fleet commander Adm. John Aquilino, two sources familiar with the behind-the-scenes conversations on the preparations told USNI News on Thursday. The communications move was designed to change the expectations on what information the public could expect when ships in the Pacific area of operations deploy, the sources told USNI News.

A San Diego-based Navy official would not confirm to USNI News when called on Thursday if Essex was in port, citing a new Pacific Fleet policy that was not elaborated on.