China’s first domestically-built aircraft carrier leaves the pier at the Dalian shipyard on May 13, 2018. Xinhua Photo

China’s first homebuilt aircraft carrier has left for its first set of sea trials on Sunday, according to state-controlled media.

The yet-unnamed Type 001A carrier was unmoored and moved by tugs from its berth at the Dalian shipyard and headed out to sea, according to photos released by the state-controlled Xinhua News Agency said on Sunday.

“The sea trials will mainly test the reliability and stability of the carrier’s power system and other equipment,” the state-controlled agency said.
“Construction on the carrier has been carried out as planned since it was launched in April last year, and equipment debugging, outfitting and mooring tests have been completed to make it ready for the trial mission at sea.”

The length of the trials was not announced but a local notice to mariners restricted a portion of the Yellow Sea near the shipyard from Sunday to Friday.

One naval analyst told USNI News the trials are another one of China’s incremental steps into developing an industrial base to field a blue-water navy.

“This news shows the result of China’s long-term investment aimed at enhancing their naval capabilities. This investment began over a decade ago and is now paying serious dividends as their naval forces and capabilities continue to grow rapidly in both power and complexity,” Eric Wertheim, naval analyst and author of U.S. Naval Institute’s Combat Fleets of the World, told USNI News.

“This is also an indication that China seeks to expand its power projection capabilities well beyond their current reach. Aircraft carriers play an important role in naval operations both in terms of their combat power and as a symbol of presence. China will no doubt seek to continue expanding their naval capabilities well into the future.”
The estimated 55,000-ton carrier is modified from the original Admiral Kuznetsov-class Russian design used for the first Chinese carrier Liaoning. The new carrier will also feature the short take-off but arrested recovery (STOBAR) configuration of its Soviet-era carrier test platform.

The Type-001A will be the first test of an emerging Chinese industrial capability to build larger warships, Hu Wenming, chairman of the China Shipbuilding Industry Corporation, said on state television on Sunday via the South China Morning Post. 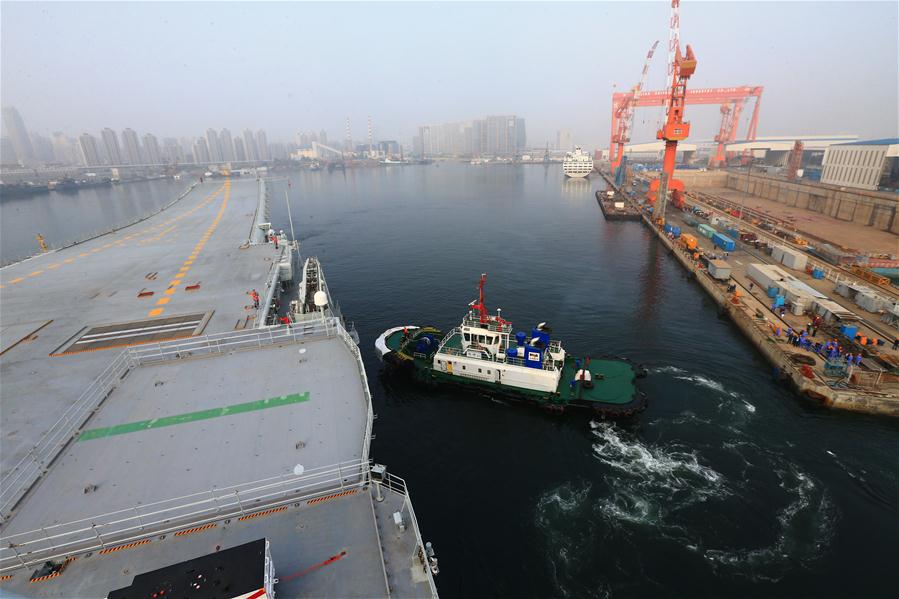 China’s first domestically-built aircraft carrier leaves the pier at the Dalian shipyard on May 13, 2018. Xinhua Photo

“We have already developed a team of experts in the research, design and construction [of aircraft carriers], and their average age is just 36,” Hu said.
“In the future, if the country wants to develop any type of aircraft carrier, we have the capability to do it.”

Hu said in the interview the carrier program was a test of a new plan of military and civilian personnel working together on larger projects.

Earlier this year, reports emerged that China was building a larger estimated 88,000-ton carrier outside of Shanghai.

In the past, officials have said Beijing’s goal was to eventually build a force of up to four aircraft carriers.