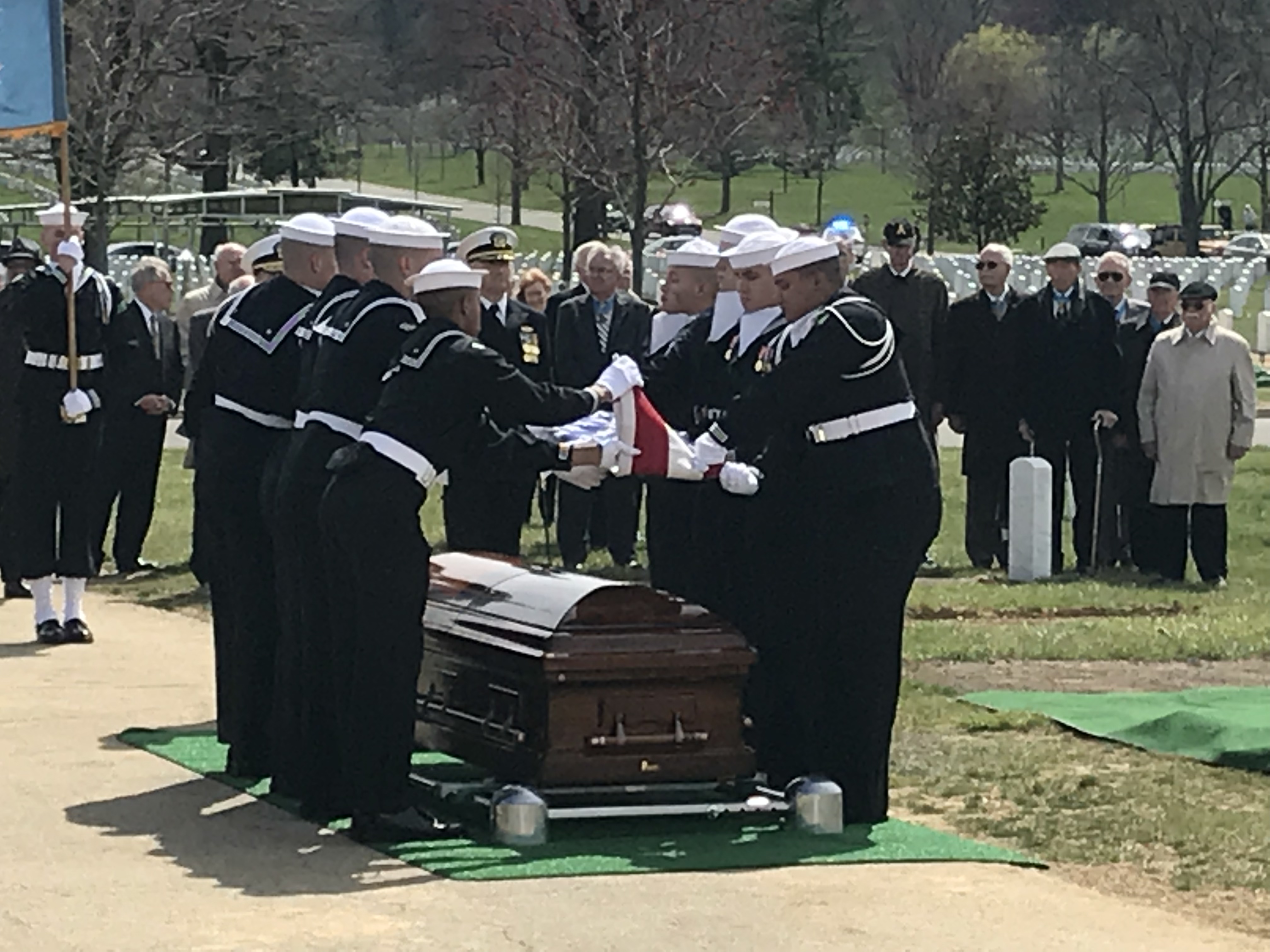 ARLINGTON NATIONAL CEMETERY – Capt. Thomas J. Hudner, Jr., a naval aviator who was awarded the Medal of Honor for his actions during the Korean War, was interred with full military honors at Arlington National Cemetery today.

A native of Fall River, Mass., Hudner was flying as the wingman for Ens. Jessie L. Brown during the Battle of Chosin Reservoir in 1950 when Brown was forced to crash-land his F4U Corsair after being hit by enemy fire. Seeing that Brown had survived the crash but was trapped in the wreckage, Hudner crash-landed his own plane so he could try to free his fellow aviator. Tragically, Hudner and the pilot of the helicopter sent to rescue the men were unable to extract Brown from the aircraft before they had to evacuate the area.

Brown, the first African-American aviator in the U.S. Navy, was posthumously awarded the Distinguished Flying Cross. Even though some officials believed Hudner made a rash decision to sacrifice his aircraft, President Harry Truman awarded him with the Medal of Honor for his heroic attempt to save his compatriot.

According to a profile of Hudner in Naval History magazine, the story of a “white man’s willingness to crash-land his own plane and risk his life to reach a black comrade in need had challenged both white and black people’s notions about race.” 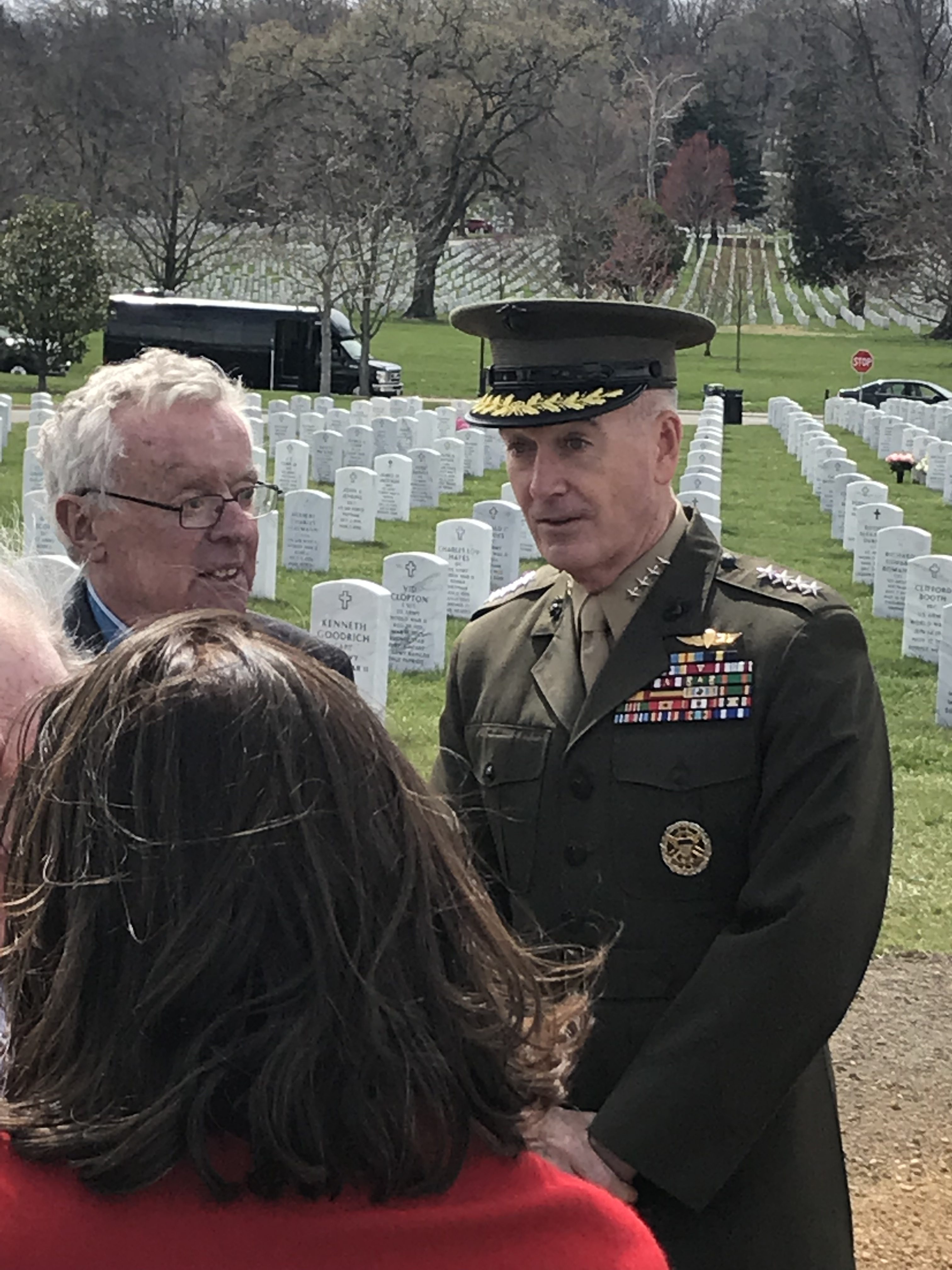 Hudner would continue flying and made the transition to jet aircraft, even spending time in an Air Force squadron on an exchange program. He retired from the Navy as a captain in 1973 after having most recently served as the head of Aviation Technical Training in the Office of the Chief of Naval Operations.

In his post-military career, he was active with several veterans support groups and served as commissioner for the Massachusetts Department of Veterans’ Services. He was also a Golden-Life Member of the U.S. Naval Institute. 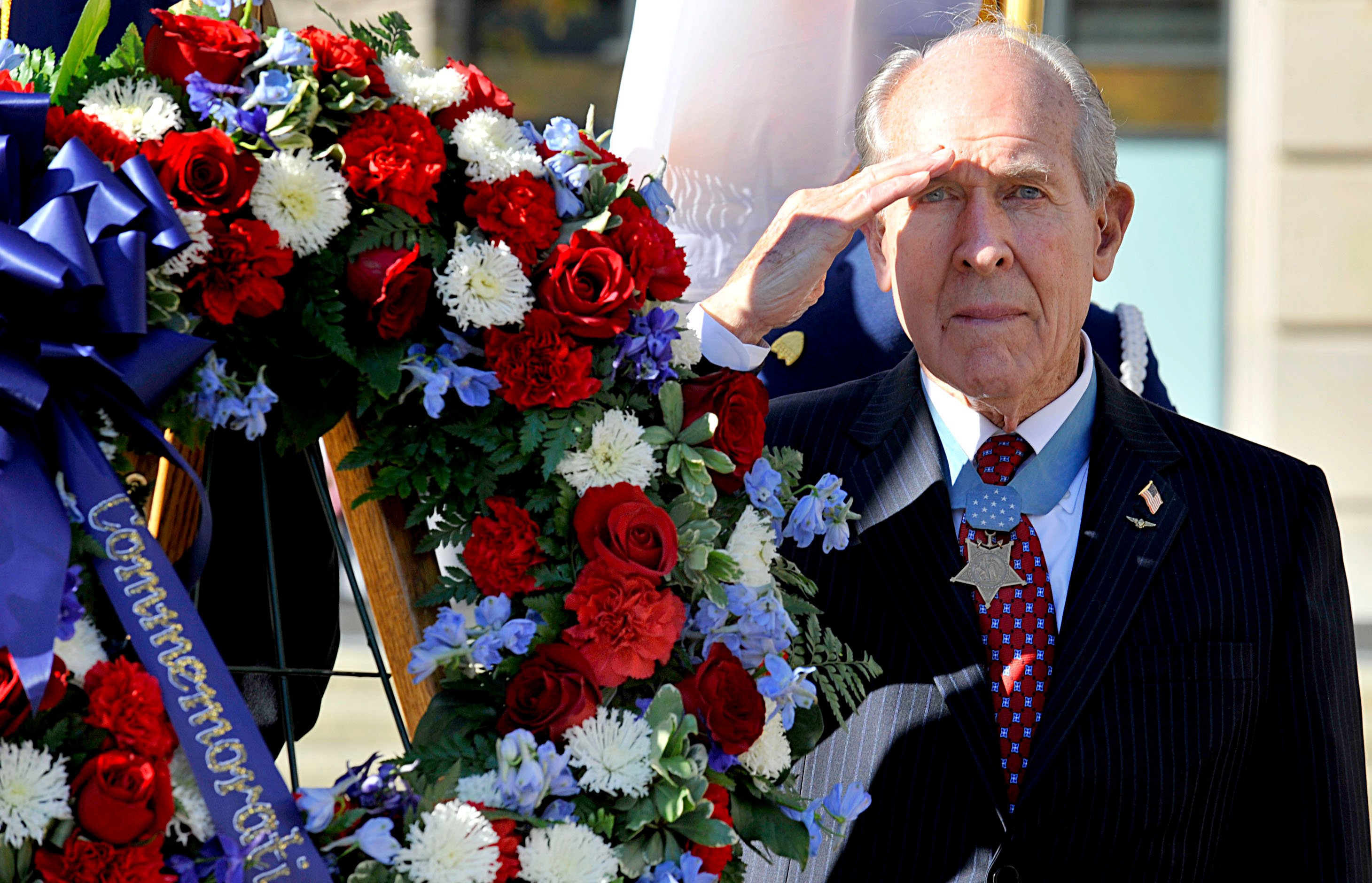 Medal of Honor recipient retired Capt. Thomas Hudner salutes while taps is played during the Centennial of Naval Aviation Wreath Laying Ceremony held at the United States Navy Memorial in Washington D.C., on Dec. 1, 2011. Hudner received the medal of honor for his heroic efforts as he attempted to rescue Ens. Jesse Brown during the Korean War. US Navy photo.

In 2012, then-Secretary of the Navy Ray Mabus announced that an Arleigh Burke-class destroyer would be named in Hudner’s honor. USS Thomas Hudner (DDG-116) is expected to be commissioned later this year.

In 2013, Hudner travelled to North Korea to search for Brown’s remains but was unsuccessful.

He passed away on Nov. 13 in Concord, Mass., at the age of 93. Flags throughout his home state are flying at half-staff today in his honor.

The ceremony at Arlington featured a missing man formation flyover performed by Strike Fighter Squadron 32 (VF-32), Hudner’s unit during the Korean War incident. Chairman of the Joint Chiefs of Staff Gen. Joseph Dunford, Chief of Naval Operations Adm. John Richardson and fellow Medal of Honor recipients were in attendance at the ceremony.