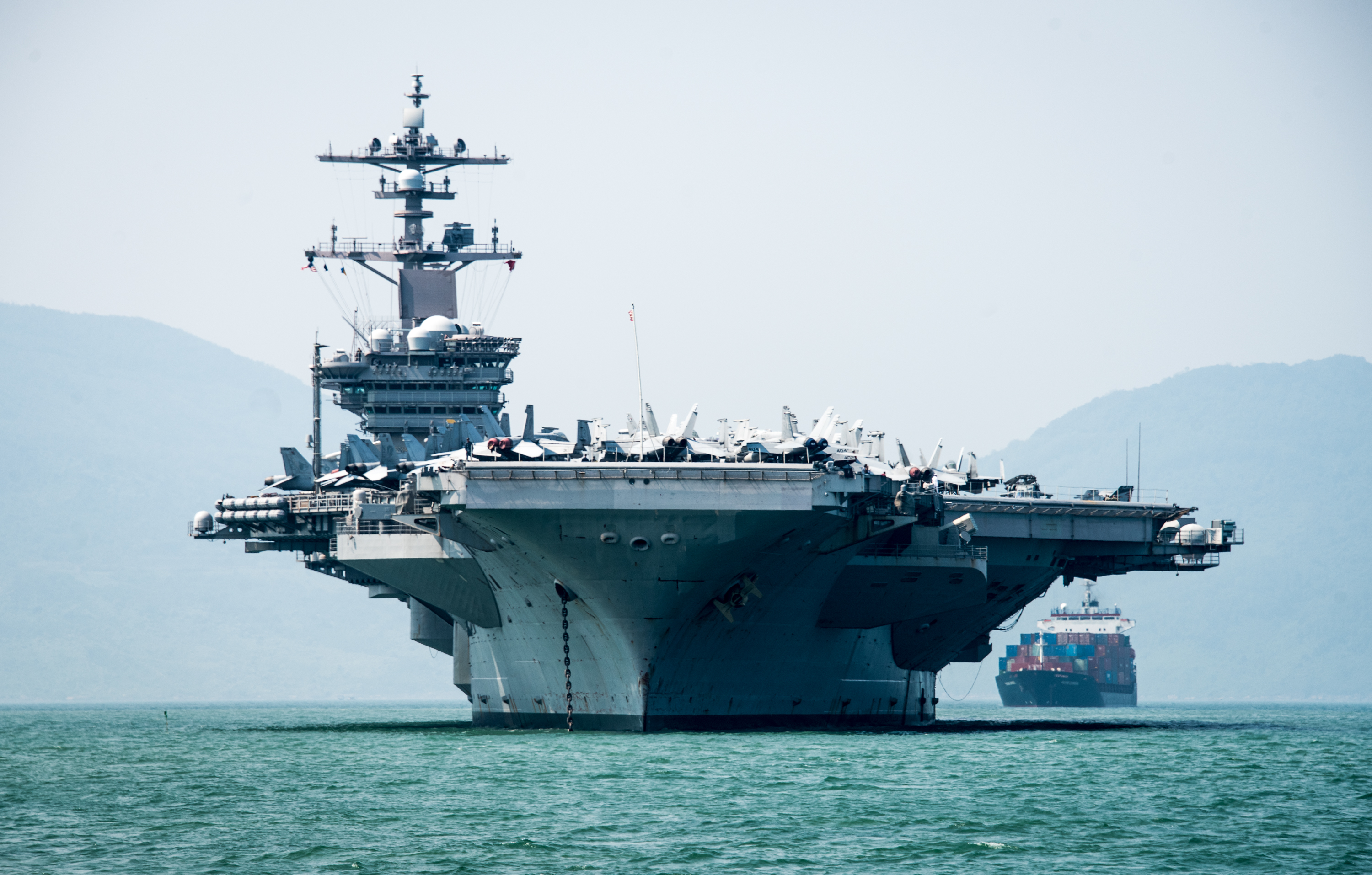 The carrier, along with cruiser USS Lake Champlain (CG-57) and destroyer USS Wayne E. Meyer (DDG-108), arrived in the central Vietnam port city on March 5 with an itinerary that included sailor-to-sailor engagements, community service projects, sports and music activities and more. Though U.S. Navy ships have made port calls in Vietnam since 2004, this is the first time a U.S. aircraft carrier has come to Vietnam since the end of the war more than 40 years ago.

“They’ve gone around and had a chance to engage with our sailors and just get a feel for the personality of our sailors,” Fuller added.
“I think one of the most heartwarming comments was, they were impressed by how hard our sailors work and how such young people are able to do such sophisticated things.”

President Donald Trump said during a May 2017 visit to Vietnam that he wanted to further the military relationship between the two countries and proposed the idea of an American aircraft carrier visit. Vice Adm. Phillip Sawyer, commander of U.S. 7th Fleet, said in the same teleconference that the completion of that promise helps “continue to normalize relationships here with the Vietnamese navy.”

“We committed (to scheduling a carrier port visit), and we made that commitment, and that in itself is important because it helps foster the trust that we want to foster within our partnership,” he added. 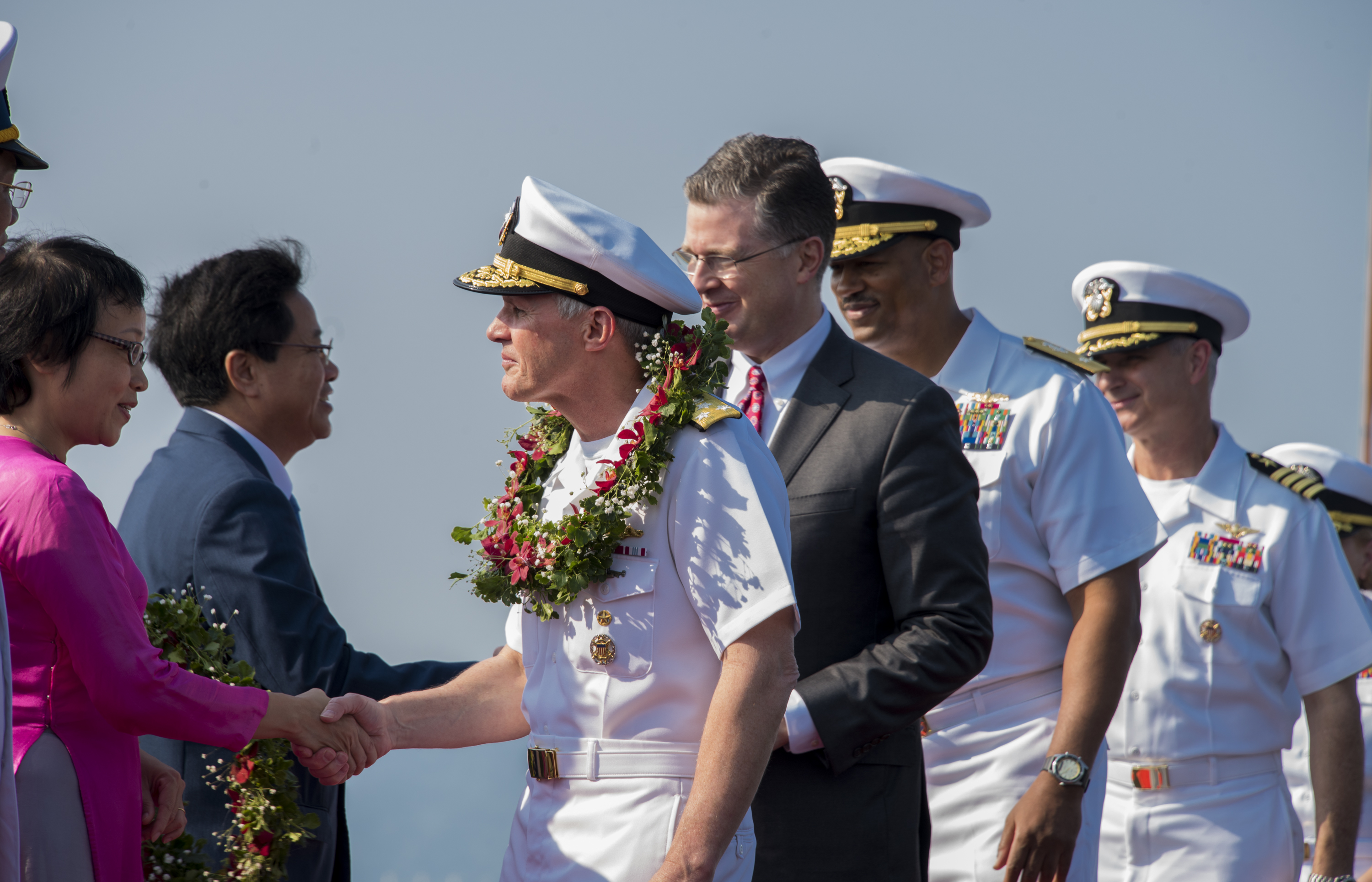 Sawyer also noted that the person-to-person relationship-building allowed by a visit like this is important. For example, he said, the head of the Da Nang People’s Committee sent a condolence letter after last year’s USS John S. McCain (DDG-56) fatal collision, and Sawyer said this week he’s been able to thank the committee in person for their letter.

The Navy and U.S. State Department have billed this visit as symbolic of the deepening ties between the two countries and as a builder of goodwill that could open future opportunities – though Sawyer was coy about what the future of U.S.-Vietnamese naval activities could look like.

“I will work closely with my Vietnamese partners, and we will develop ideas and options for what makes sense for both of us,” he said in response to a question.
“We continue building on the robust partnership that we actually already have. … When we talk about what’s in the future, recognize that we have done quite a bit already: we have a continuing engagement with the people here, it’s called Pacific Partnership, that we’ll do again this year. So I look forward to talking with my Vietnamese counterparts to discuss what else we can do going into the future.”

Asked again later in the conversation about the future of the relationship, Sawyer said “I’ve been in discussions with Naval Zone 3 and I’ll have other discussions with the Vietnamese Navy about what we do going forward to continue to build the partnership that we have been building and that continues to be very robust. There have been a lot of things in my mind that I will discuss with the Vietnamese Navy leadership, but it really is kind of a two-way street; I want to make sure I understand what would be beneficial for the Vietnamese Navy and what we can do, and then we will come up with a plan going forward.”

He did, though, say that as a career submariner, “I would greatly look forward to bringing one of the U.S. submarines into a port in Vietnam, so that’s one of the things I will offer.”

Fuller added during the call that “we’ll find areas to continue to build our maritime cooperation, and we will do the basic skill sets that mariners have – with this port visit in particular we are doing culinary exchanges, firefighting exchanges, we’re having people come and tour the Carl Vinson to see the type of things we do on a Navy ship.”

Senior leadership from Vietnam and from U.S. 7th Fleet, the U.S. Embassy in Hanoi and the Carl Vinson Carrier Strike Group, pose for a photo during a March 5 welcome ceremony in Da Nang, Vietnam, for the aircraft carrier USS Carl Vinson (CVN 70) as part of its port call. US Navy photo.

Looming in the background of the visit is China. Within about 200 miles of Da Nang sit both China’s Hainan island and the Paracel Islands in the South China Sea that are claimed by Vietnam but controlled by China.

Sawyer made clear that “it’s about Vietnam” and not China when it comes to the message the visit sends – that the event “continues a path we’ve been on that continues to build a robust partnership” between the two navies.

Still, regarding China’s activities in the South China Sea, Sawyer said that “land reclamation and militarization cause angst within the region, and the angst that it causes is really because of lack of transparency; it’s not clear what’s going to happen down there. And I think that angst and that lack of transparency are potentially disruptive to the security and stability of the region. And that causes concern.”

More directly, he said the ability to freely move commerce through the region is paramount and that “anything that would appear to contradict that is a concern for all the region.”

“Conflict is not inevitable, but security doesn’t happen by itself either. And that’s why we, the United States Navy and the 7th Fleet in particular have been out here for 75 years … and we are going to be out here for the future,” Sawyer concluded.