With USS Ronald Reagan (CVN-76) tied-up in maintenance for a couple months, the Carl Vinson Strike Group is pinch-hitting in the Western Pacific on a short deployment less than a year from returning from the region.

USS Carl Vinson (CVN-70) is expected to enter the Western Pacific at a time the Navy’s only permanently forward-deployed aircraft carrier is moored in its homeport of Yokosuka, Japan, for a planned maintenance period Navy officials say is expected to last a couple of months.

“The Reagan normally goes into maintenance between January and April every year,” said Bryan Clark, senior fellow at the Washington-based Center for Strategic and Budgetary Assessments. “Usually the Navy tends to backfill with a San Diego or Bremerton (Wash.)-based carrier.”

Workforce scheduling constraints in Yokosuka are the primary reason carrier work always occurs at the start of the year, Clark added. The Yokosuka shipyard workforce is limited to how much work can be accomplished at one time, so typically the Navy schedules maintenance on its forward-deployed carrier, currently Reagan, during the first four months of the year, freeing up the workforce for other ship projects the remaining eight months of the year.

For a decade, since USS George Washington (CVN-73) arrived in Yokosuka as the Navy first nuclear-powered carrier permanently stationed in Japan, the Navy has kept to this schedule of performing maintenance on its forward-deployed carrier between January and April, conducting sea trials in May, and deploying for patrol in June.

“The Navy is usually reticent to talk about scheduled maintenance,” Clark said.

According to Navy officials, Reagan’s flight deck is being resurfaced. Typically, this type of maintenance is performed after 8,000 to 10,000 arrested landings and before a deployment, according to past Navy statements. The work is expected to take about two months.

Reagan returned from its latest outing in November, after spending about three months on patrol, including leading the search and rescue efforts for a C-2A Greyhound cargo aircraft that crashed into the Philippine Sea. In September, when Reagan left Yokosuka, a Navy press release described the patrol as coming after an in-port period that gave the “crew and ship a chance to conduct maintenance.” 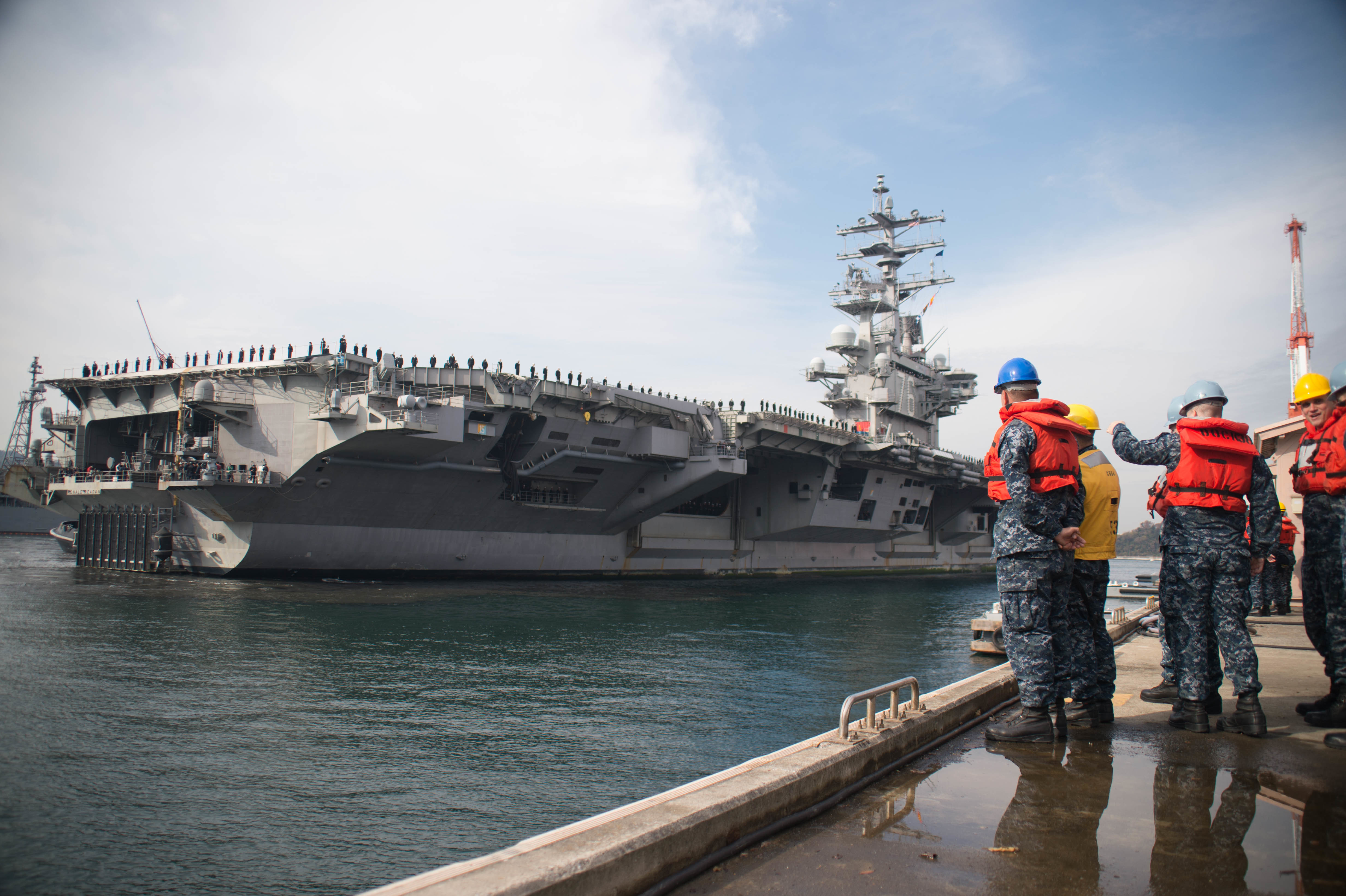 USS Ronald Reagan (CVN 76) approaches a pier at Fleet Activities, Yokosuka. Reagan is returning from a routine patrol in in the 7th Fleet area of responsibility in support of security and stability in the Indo-Asia Pacific region. (U.S. Navy photo by Mass Communication Specialist 2nd Class Christian Senyk/Released)

The strike group will be in the 7th Fleet area of operation, but will remain under the control of 3rd Fleet, as part of the Navy’s 3rd Fleet Forward command and control construct. Previously, Navy leaders have explained the 3rd Fleet Forward construct is one of several tools used as a deterrence, notably against North Korea. The idea, first proposed in 2015, is by sending 3rd Fleet ships across the International Date Line, the Navy can concentrate 7th Fleet forces on top threats in the region.

Clark said the Navy started phasing out these double-pump deployments, where a strike group returns from a long deployment and is sent back out within six months.

But, based on where Vinson is on its operation and maintenance cycle, Clark said it wouldn’t necessarily be detrimental to send a carrier back out so close to its last deployment. The important question for the Navy to answer, Clark said, is whether they are adequately funded and is the space available to perform maintenance when Vinson returns to San Diego this Spring.

Navy officials say the current Vinson Strike Group deployment will be shorter, but wouldn’t specify how long Vinson will be gone or the elaborate on the strike group’s mission.