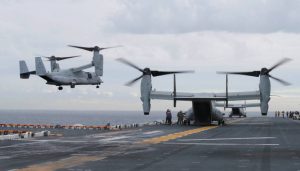 U.S. Marine MV-22B Osprey lands on the deck of the USS Bonhomme Richard during events marking the start of the Talisman Saber 2017 joint military exercise off the coast of Sydney on June 29. | REUTERS

Tokyo on Sunday asked Washington to halt Osprey flights in Japan after the U.S. Navy and Marine Corps called off search and rescue operations for three marines who disappeared after an MV-22 crashed off Australia’s east coast a day earlier.

The Marine Corps’ 3rd Marine Expeditionary Force, based in Okinawa Prefecture, said in a statement that it had ended its hunt for the missing troops at around 3 a.m. local time Sunday.

Operations have shifted to recovery efforts, and the next-of-kin of the three marines have been notified, essentially confirming that the U.S. military did not expect to find them alive. The 23 other service members who were on board were rescued.

In the wake of the crash, new Defense Minister Itsunori Onodera said Sunday that Tokyo had asked Washington to refrain from flying the controversial MV-22 in Japan. He did not offer further details, including a time frame for the suspension.

Critics in Japan have blasted the Osprey, which takes off and lands like a helicopter but can fly like an airplane, as unsafe.

The U.S. military has deployed 24 MV-22s to Marine Corps Air Station Futenma in Ginowan, Okinawa Prefecture. Residents there have protested the deployment to the base, which is located in the middle of the densely populated city.

Last December, an MV-22 Osprey based at Futenma ditched off Okinawa’s coast, injuring five crew members. The Pentagon characterized that crash, as well as Saturday’s, as a “mishap.”

The U.S. briefly grounded all Ospreys in Okinawa after the accident but resumed operations less than a week later.

The tilt-rotor aircraft that went down had launched from the USS Bonhomme Richard and was conducting regularly scheduled operations when it crashed into the water around 4 p.m. Saturday.

The Bonhomme Richard is home-ported at the U.S. naval base in Sasebo, Nagasaki Prefecture.

“As the sea state permits, recovery efforts will be conducted to further search, assess and survey the area, in coordination and with assistance from the Australian Defence Force,” the 3rd Marine Expeditionary Force said.

Recovery and salvage operations can take several months to complete, it said, but can be extended based on environmental factors.

Australian Defence Minister Marise Payne said in a statement Saturday that she had spoken with her U.S. counterpart, Secretary of Defense James Mattis, and confirmed that no Australian personnel were aboard the aircraft.

Payne said the incident occurred off the coast of Shoalwater Bay, in the state of Queensland.

The circumstances of the incident are under investigation, the 3rd Marine Expeditionary Force said.

Ospreys were believed to have been used in the recent Talisman Saber joint military exercises conducted by the U.S. and Australia. More than 33,000 U.S. and Australian military personnel, including the Bonhomme Richard Expeditionary Strike Force, participated in the drills, which wrapped up on July 25, the U.S. military said. Members of Japan’s Ground Self-Defense Force also took part in the drills.

The U.S. had planned to fly Ospreys at night as part of an upcoming joint exercise with the GSDF in Hokkaido between Thursday and Aug. 28, but it is now unclear whether the aircraft will take part.

James Schoff, an Asia expert with the Carnegie Endowment for International Peace in Washington, said the Osprey safety issue would likely be one of the first things new U.S. Ambassador William Hagerty confronts when he arrives in Japan.

“This will be in Ambassador Hagerty’s inbox when he arrives, given Japan’s focus on the MV-22,” Schoff said.

Hagerty is expected to arrive in Japan as early as the middle of this month.