Home » News » How Did a 30-Year-Old Jet Dodge the Pentagon’s Latest Missile?

How Did a 30-Year-Old Jet Dodge the Pentagon’s Latest Missile?

By now you’ve probably heard that a U.S. fighter shot down a Syrian jet about a week ago. What you might not know is that before the F/A-18E hit its target, it missed–and it missed with the best, newest U.S. missile.

On June 18, just moments after a Syrian Arab Air Force Su-22 attacked Coalition forces, a U.S. Navy F/A-18E Super Hornet strike fighter rolled into a firing position and opened fire. The Super Hornet locked onto the Su-22 “Fitter” and launched the Military’s most advanced short-range air-to-air missile, which promptly missed. While the plane was eventually brought down by another, different missile, the question remains: why did the AIM-9X Sidewinder miss?

The Sukhoi Su-22 is a Cold War-era attack jet designed to strike targets on the ground. A single-seat aircraft, like many aircraft designed in the 1970s it had “swing wings.” Cutting edge for its time, this feature allowed the plane to maximize its combat range. Known as “Fitter” to NATO, the Su-22 was designed solely as an air-to-ground aircraft with little to no air-to-air capability. It was produced in large numbers and widely sold abroad. The design is obsolete, and while many air forces still fly the Fitter, it isn’t by choice. Here’s a video of Su-22 Fitters in Polish Air Force service:

According to CNN, the Navy Super Hornet locked onto the Su-22 Fitter at a range of 1.5 miles. The Super Hornet launched an AIM-9X, and the Syrian pilot loosed flares to lure the infrared guided missile away from his fighter. The trick worked, and the American missile missed. The Super Hornet then launched an AMRAAM missile which, using radar guidance, is unaffected by flares. This time the Fitter went down.

So why did the AIM-9X miss? A contributor to Combat Aircraft magazine proposed a plausible theory: While the 9X is designed to resist the allure of defensive flares, but it may have been too specialized in rejecting American flares. Contributor Angad Singh tweeted a story originally written by aviation authority Bill Sweetman about American tests of Soviet aircraft during the Cold War. 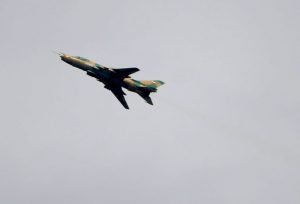 During the 1980s, U.S. Air Force maintained the top secret 4477th Test & Evaluation Squadron. Flying the Tonopah Test Range in Nevada, the 4477th operated Soviet fighters collected from around the world, often captured by allies, to determine their capabilities. According to the story, the Air Force received a flare dispenser that had been on a Su-25 ground attack jet shot down over Afghanistan. The dispenser was quickly attached to a MiG-21 operated by the 4477th and taken out for testing against the latest American infra-red guided missile, the AIM-9P.

What happened next surprised the Air Force. The AIM-9P Sidewinder, designed to see past flares, was readily diverted by the Soviet flares. The problem was that the -9P was too attuned to the characteristics of American flares it had been tested against and not against the Soviet flares, which according to the squadron commander between 1985 and 1987 were “dirty, and none of them looked the same.” 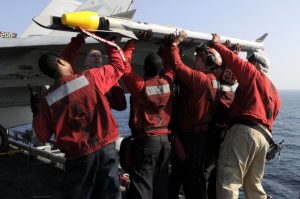 Sailors on the USS George Bush attach an AIM-9X Sidewinder to the wingtip of a Super Hornet strike fighter, February 2011.

Did something like this happen in the skies over Syria? The AIM-9X, a relatively new missile, should have easily taken down the aging Su-22 Fitter. A lot of air forces, particularly America’s NATO allies, rely on the AIM-9X as their short-range missile. The news that it was unable to shoot down a 30-year-old fighter jet will be disturbing to many.