Carrier Lincoln rejoins the fleet in first underway since 2013

“Once sea trials are complete, CVN 72 will reassume her role in providing for the national defense as a central asset of U.S. Naval Forces,” he said. “Lincoln will be homeported in Norfolk enabling Commander Strike Group 12 to deliver quick and decisive options in times of crisis.”

During the overhaul, Hecht added, Lincoln’s crew amassed more than 2.5 million man hours alongside the shipyard’s own workers while revitalizing the ship and its systems. That work included modernizing Lincoln’s systems to support the integration of the Joint Strike Fighter to the carrier’s air wing, “putting Lincoln on the cutting edge naval aviation,” he said.

As Lincoln left Newport News, she left behind the ex-carrier Enterprise, which has been in the shipyard being deactivated nearly as long as Lincoln has been in overhaul.

But as Lincoln heads back to the fleet, she takes a significant part of Enterprise with her. In 2014, shipyard workers transferred one of Enterprise’s massive anchors to Lincoln instead of scrapping it along with the rest of the aging hull from the world’s first nuclear-powered warship.

The newly refitted Lincoln is the fifth Nimitz-class carrier, and also the fifth to complete a mid-life complex overhaul and refueling.

Officially, the last time the ship was underway was March 2013 while completing a short jaunt across the bay from Norfolk to Newport News to begin the mid-life overhaul.

With the overhaul now behind her, she’ll return from sea trials to Naval Station Norfolk, Hecht said, where she’ll head into a 60-day post-RCOH maintenance to correct any discrepancies identified on sea trials. 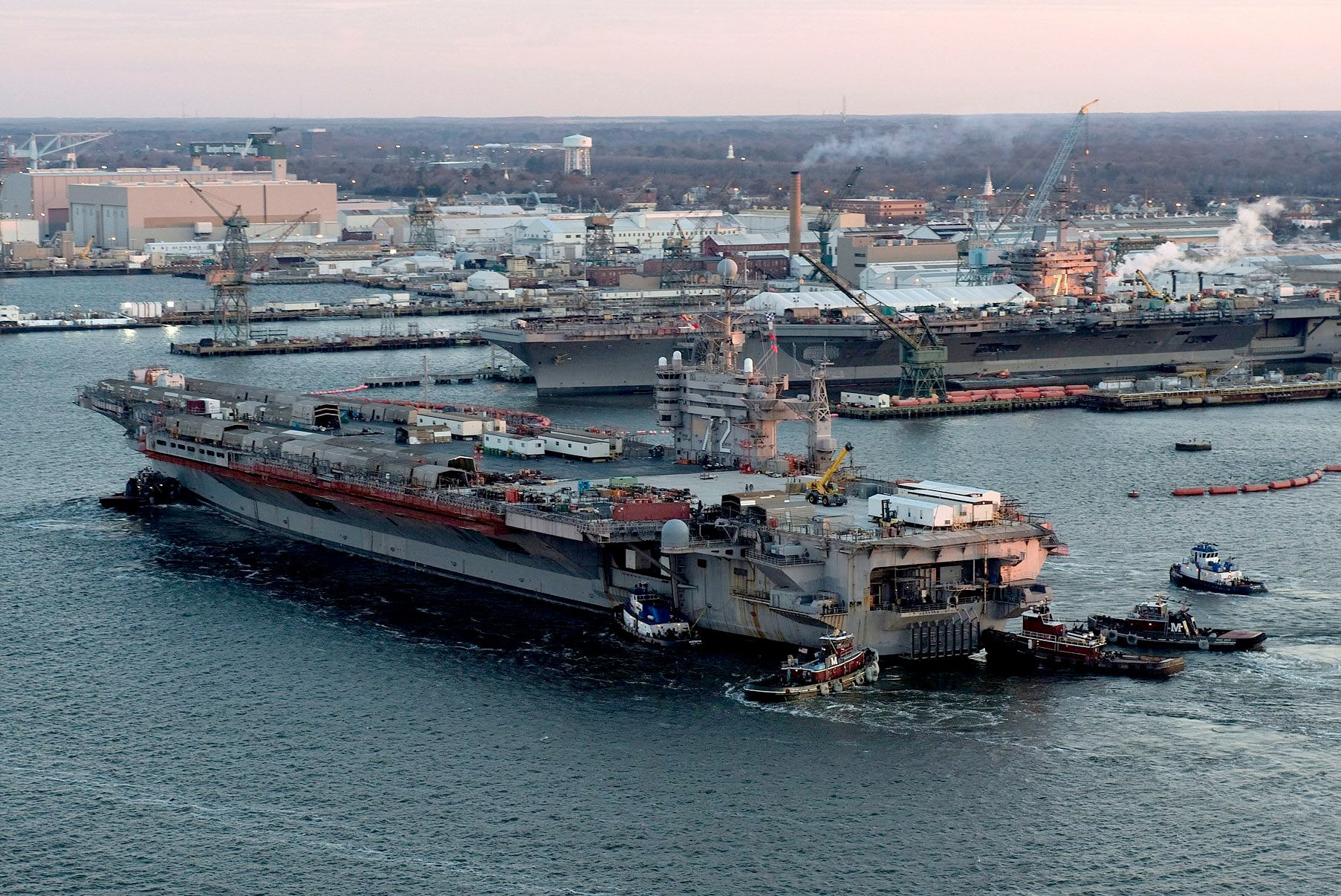 The aircraft carrier Abraham Lincoln passes her sister ship the carrier Theodore Roosevelt on March 28, 2013, as she heads into the Newport News Shipyard after leaving Naval Station Norfolk, Va. Lincoln completed that overhaul May 8 and headed to sea on sea trials. She will be homeported in Norfolk for the near future, at least and is assigned to Carrier Strike Group 12.Photo Credit: U.S. Navy

The ship and crew completed a five-day “fast cruise” in early May in preparation for the underway period, according to a Navy press release. Fast cruises are pier side simulations of being underway and are designed to get crews back in seagoing shape.
“The fast cruise helped us to solidify team work and processes within our damage control, engineering and medical response teams as well as identify and repair any defects within our operating systems,” said Lincoln’s training officer, Lt. Cmdr. Paul Henderson in the release.
“Our ship is ready to return to the fleet, but what is even more imperative is that our sailors are ready to get underway and respond to casualties to protect our ship and our crew.”
Preparing for this overhaul-ending shakedown began in February, the release said, with the crew simulating various underway emergency scenarios.
“The training scenarios and ship-wide drills we’ve executed these last few months are skills that Sailors can lose when faced with such a long RCOH period,” said Command Master Chief James Stedding in the release.
“Being in the shipyards and not being sailors at sea required us to be more focused and diligent about training.” 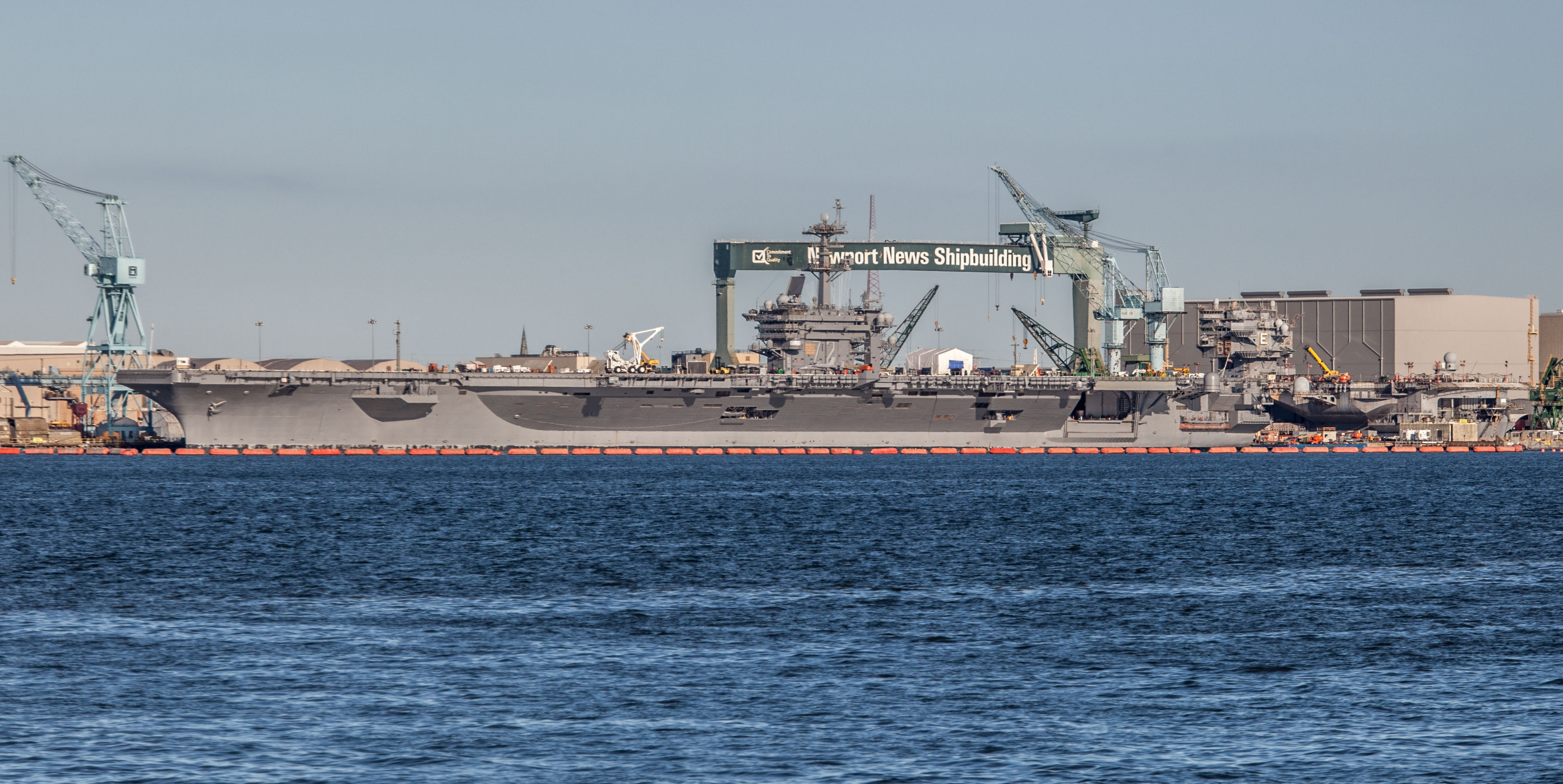 The aircraft carrier Abraham Lincoln sits pier side April 4, 2017, at the Huntington Ingalls Newport News Shipyard, nearing the end of her nearly four-year complex overhaul and refueling. The ex-Enterprise, the worlds first nuclear powered warship can be seen in drydock to Lincoln’s rear. One of Enterprise’s massive anchors was added to Lincoln in 2014.Photo Credit: Mark D. Faram/Staff

Lincoln is now ready for another 25 years of service.
Following Lincoln’s departure from Newport News, aircraft carrier George Washington will be next in line for the mid-life overhaul.
Washington is currently berthed at Naval Station Norfolk awaiting the move to Newport News, and is set to enter the dry-dock portion of its overhaul in August, a space vacated just last week when the yard moved the ex-USS Enterprise to an adjacent pier to complete her deactivation.