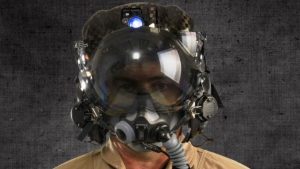 The F-35 Helmet Mounted Display Systems provide pilots with information they need to complete their missions –- such as airspeed, heading, altitude, targeting information and warnings –- on the visor rather than a traditional Heads-up Display. (Photo courtesy Lockheed Martin)

A software fix designed to make the state-of-the-art F-35 helmet easier to use for Navy and Marine Corps pilots landing on ships at night is still falling short of the mark, the program executive officer for the Joint Strike Fighter program said Monday.

One discovery made as the F-35C Navy carrier variant and F-35B Marine Corps “jump jet” variant wrapped up ship testing this year was that the symbology on the pricey helmet was still too bright and distracting for pilots landing on carriers or amphibious ships in the lowest light conditions, Air Force Lt. Gen. Christopher Bogdan told reporters.

During the final developmental test phase for the F-35C aboard the carrier George Washington in August, officials told Military.com they were testing a new software load specifically designed to address the F-35 helmet’s “green glow” problem, which can make it difficult for pilots to detect outside light sources and the cues they need to land their aircraft safely.

While testers were hopeful at the time the problem was solved, Bogdan said officials are not yet satisfied.

“The symbology on the helmet, even when turned down as low as it can, is still a little too bright,” he said. “We want to turn down that symbology so that it’s not so bright that they can’t see through it to see the lights, but if you turn it down too much, then you start not being able to see the stuff you do want to see. We have an issue there, there’s no doubt.”

Bogdan said the military plans on pursuing a hardware fix for the helmet, which is designed to stream real-time information onto the visor and allow the pilots to “see through” the plane by projecting images from cameras mounted around the aircraft. But before that fix is finalized, he said, pilots of the F-35 B and C variants will make operational changes to mitigate the glare from the helmet. These may include adjusting the light scheme on the aircraft, altering how pilots communicate during night flights, and perhaps changing the way they use the helmet during these flights, he said.

“We’re thinking in the short term we need to make some operational changes, and in the long term we’ll look for some hardware changes,” Bogdan said.

The window for making such adjustments is rapidly closing. The first F-35B squadron is expected to move forward to its new permanent base in Japan in January ahead of a 2018 shipboard deployment in the Pacific. The F-35C is also expected to deploy aboard a carrier for the first time in 2018.