U.S. airstrikes from carrier Eisenhower top 1,000 against ISIS in Iraq and Syria

By: Sam McNeil and Petr David Josek, The Associated Press

USS EISENHOWER, Persian Gulf — One after another, fighter jets catapult from the flight deck of the USS Eisenhower, a thousand-foot (305-meter) American aircraft carrier, afterburners glowing amber above the blue Persian Gulf, on their way northwest to join the fight in Iraq and Syria against the Islamic State.
The fighter jets refuel on the way before receiving from coalition partners targets like convoys, hideouts and mortar positions in ISIS-controlled territories such as Mosul and Raqqa, said Rear Adm. James Malloy, commander of the Eisenhower carrier strike group.
From his office aboard the USS Eisenhower, Malloy described coalition success around Mosul while cautioning that victory is close at hand.
“Mosul is the last large city in Iraq that is held by Daesh, but Daesh is by no means finished in Iraq, so our mission in Iraq won’t end as Mosul falls,” he said, using the Arabic acronym for ISIS.
While inter-coalition coordination was “seamless,” communication with Russia was limited to “deconfliction,” Malloy said.
“There’s no coordination there because the goals are not the same,” the admiral said. 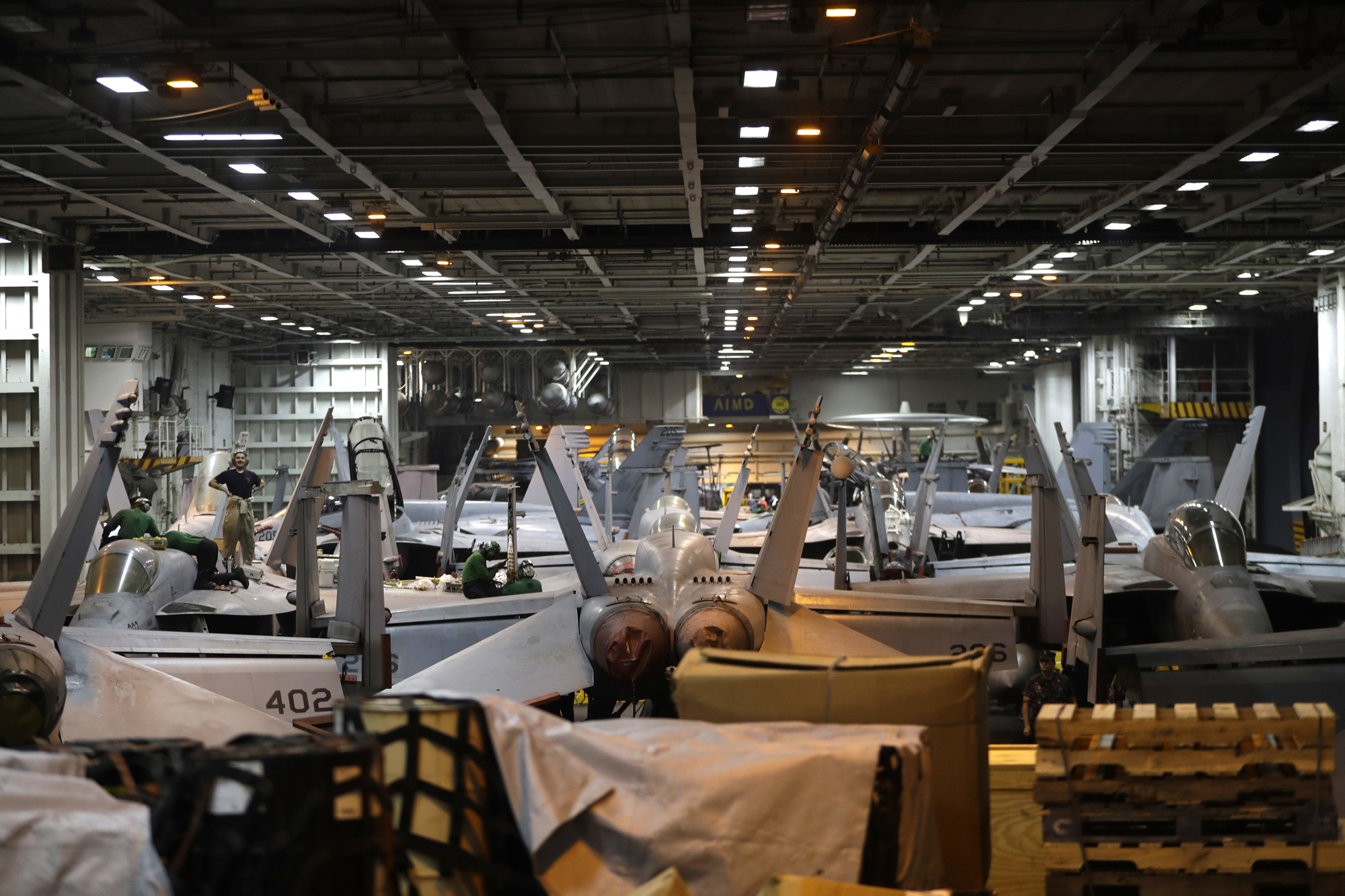 The carrier’s Capt. Paul Spedero said sorties from the Eisenhower have dropped nearly 1,100 bombs on ISIS targets since June when the ship entered the Persian Gulf after launching strikes from the eastern Mediterranean.
The ship’s 5,200 sailors arm, repair, launch and recover seven to 20 Super Hornet fighter jets every day that drop on average 10 bombs each or reconnoiter in support of anti-ISIS coalition forces.
The crew catapults the jets from the ship at 145 mph, and they use a hook and cable to rapidly catch the fighter jets on the 500-foot long carrier deck.
“For a catapult shot, if you think about a Porsche 911, 0 to 60 in about 2.5 seconds, these aircraft will go from 0 to 145 miles per hour in 2.5 seconds,” said Cmdr. Jeremy Rifas, the carrier’s air boss, from inside the ship’s control tower overlooking launches. 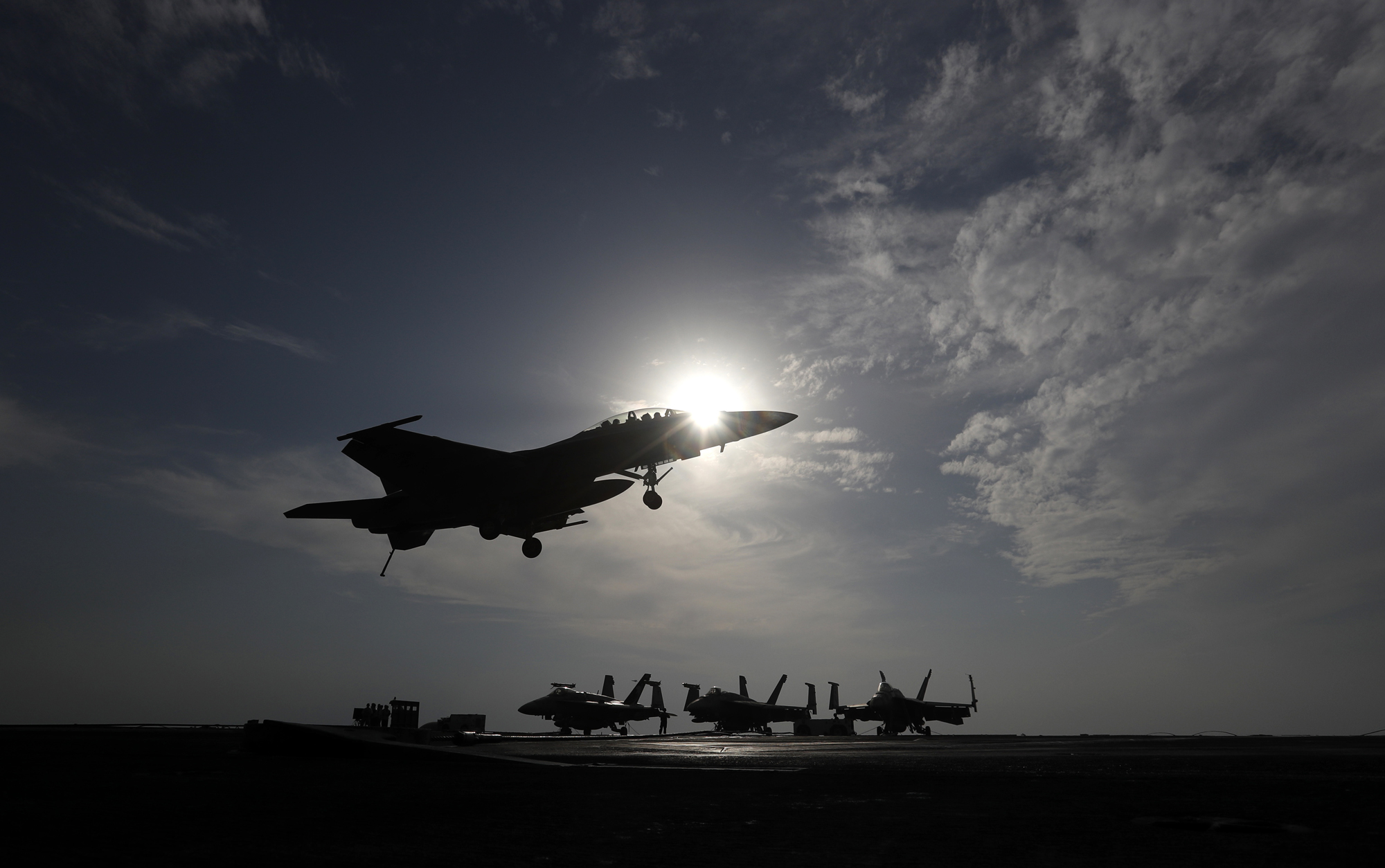 The fighters on these sorties head north by northwest for an hour before refueling midair and then approaching coalition ground forces that provide the pilots with targets for airstrikes or reconnaissance.
“They go into harm’s way every single time, every single mission. I don’t really close my eyes until 2300 when the last one comes back,” Malloy said.
The U.S.-led coalition has flown more than 125,000 sorties in Iraq and Syria since Operation Inherent Resolve began in Aug. 8, 2014, according to the U.S. Department of Defense.