The unit has no aircraft yet, but is slated to begin delivery of their MQ-4C Triton UAVs late in 2017 and begin flight operations. The squadron is currently scheduled for an inaugural deployment to 7th Fleet in 2018. 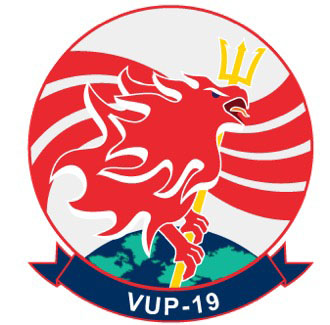 VUP-19 was named after Patrol Squadron 19, which was in service 1946 until 1991. It takes on the squadron’s name and nickname of “Big Red.” It’s unit patch is also a nod to the former P-3 Orion squadron, but has been updated to reflect the unit’s new mission.

“As the Navy’s first MQ-4C Triton squadron VUP-19 will operate and maintain the MQ-4C Triton to support overseas operations beginning in fiscal year 2018,” said Cmdr. Dave Hecht, spokesman for Naval Air Forces, Atlantic. “The squadron consists of 130 members that have been rotating through NAS Patuxent River, Maryland, to train with test pilots.”
In January 2017, a Triton mission systems trainer is scheduled to open NAS Jacksonville across the street from the Current P8 simulation facility.
This will give the officer and enlisted operators a jump start on mission training before their aircraft arrive.
The squadron’s members are formed into crews, just as any other Navy patrol squadron, but the P-8A pilots, naval flight officers and aviation warfare operators don’t fly, instead controlling the aircraft from a mission control system.
The squadron’s mission and aircraft are designed to complement the Navy’s P-8A Poseidon patrol aircraft, which are currently being phased into the fleet, replacing the P-3 Orion.
With a 130-foot wingspan, the Triton aircraft is expected to have a maximum flight endurance of up to 28-hours, giving it the ability to cover up to 1 million square miles of ocean in a single patrol mission.
Though like its Global Hawk sister, the aircraft is usually flown from a ground control station, the hope is that it could also be controlled eventually from a P-8, but that capability has yet to be officially developed.
VUP-19’s operators will be in on the ground floor of that effort, helping the Navy develop the  operational techniques and procedures for operating the two together, Navy sources tell Navy Times.
That effort will use the lessons gained from another twin-aircraft effort, the teaming of the MH-60 helicopter and the MQ-8 Fire Scout while taking the capability into long-range,fixed-wing maritime patrols.
VUP-19 was named after Patrol Squadron 19, which was in service from 1946 until 1991. It takes on the squadron’s name and nickname of “Big Red.” Its unit patch is also a nod to the former P-3 Orion squadron, but has been updated to reflect the unit’s new mission.