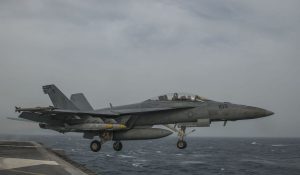 An F/A-18F fighter jet that crashed into the Persian Gulf last year shortly after launching from the USS Theodore Roosevelt ingested debris as it took off, but a Navy investigation determined the crew still could have made it safely back to the aircraft carrier if not for pilot error.

At the time of the May 2015 crash, the Norfolk-based ship was deployed in support of Operation Inherent Resolve against the Islamic State group.

Details of what happened to the Virginia Beach-based Super Hornet from Strike Fighter Squadron 211, nicknamed the Fighting Checkmates, were contained in an investigation obtained through the Freedom of Information Act. The Navy denied a request for its video of the incident but provided an animated re-creation of the crash based on instrumentation data.

The report shows the problems began on the Roosevelt’s flight deck.

The Super Hornet’s left engine started sparking heavily halfway down the carrier’s catapult track, sailors spotted small bursts of flames coming out of the exhaust, and there were reduced thrust and stalling after takeoff. The two-person aircrew decided to return for an emergency landing.

“Every step of the way I was trying to fight to save the airplane,” said the pilot, whose name was redacted from the report. “There are probably a couple of steps I may have done a little differently just to be 100 percent honest.”

The investigation faults the pilot for not being patient enough to use the correct flap configuration, angle of bank and engine throttle speed to safely land with one engine.

After a rapid descent, dumping of munitions and fuel, and an uncontrollable deviation to the left as the jet started to regain lift, the weapons system officer made the decision to eject about 2 miles from the ship. It had been less than two minutes since takeoff.

The pilot’s parachute fully opened just before he hit the water. His crewmate’s did not.

Both survived, but the weapons system officer suffered several compression fractures along his spine, bruised a rib, hip, tricep and eye, and was bleeding from a cut when the rescue swimmer reached him a few minutes after impact. The pilot also experienced heavy bleeding and reported having “shooting pain going up my back” after he was hoisted into a rescue helicopter.

The jet and the weapons it carried were valued at more than $86 million. What the Navy says led the crew to eject and the jet to crash was decidedly less expensive: foreign-object debris and pilot error.

“Naval aviation is not inherently dangerous, but it is unforgiving, and the most unforgiving phases of every mission originating from the carrier are during launches and recoveries,” wrote the officer who investigated the crash, whose name also was redacted.

“During this mishap, there was a rush to initiate a landing sequence with an aircraft that still needed significant time to be properly configured for a single-engine landing.”

The jet’s engines were retrieved from the bottom of the gulf. The investigation says the most likely culprit for what the jet’s left engine ingested was the catapult’s water brake splash guard, which had been missing half its length for several days.

Crews regularly walk the flight deck to look for debris but somehow missed this piece. What’s more, the investigation found several other instances where the carrier’s jets ingested debris.

Ironically, the debris in those incidents came from ball bearings in vacuums used to clean the deck. The day of the Super Hornet crash, nine ball bearings were found during foreign-object-debris walks, including three between catapults, the report says.

A Feb. 19 endorsement of the investigation by the commander of Naval Air Force Atlantic says the vacuum cleaners have been modified throughout the fleet to eliminate the ball bearings.

“That no other aircraft sustained similar damage during the remainder of ROOSEVELT and COMCARAIRWING ONE’s deployment suggests this was an isolated event, but an avoidable event all the same,” the investigation said.