A diplomat with the Russian Embassy confirmed that a Russian team visiting India last week made the offer.

“First revealed in May 2015, the Project 23000E multipurpose aircraft carrier is designed to conduct operations in remote and oceanic areas, engage land-based and sea-borne enemy targets, ensure the operational stability of naval forces, protect landing troops, and provide the anti-aircraft defense,” the Navy official said, speaking on condition of anonymity. 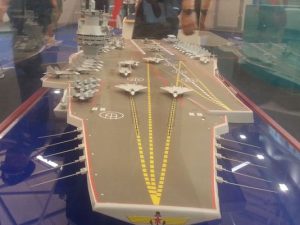 “The choice [India’s] is to have a nuclear powered carrier, technology for which will not be easy to get, and international help will be needed by India in the design and development of the super carrier,” Nitin Mehta, an independent defense analyst, said.

Russia has already overhauled and modernized a Kiev-class carrier-cruiser, renamed INS Vikramaditya, for the Indian Navy from 2004-2013 in which they “gained valuable insights into carrier-building techniques through that process,” Mehta said.

The US, meanwhile, has offered the electromagnetic aircraft launch system (EMALS), which is does not include nuclear propulsion technology and is unavailable for the Russian carrier, according to the Indian Navy official.

“EMALS is a major attraction because it is flexible and allows variety of aircraft to come on the deck including the lighter, homemade light combat aircraft and heavy fighter aircraft,” he said.

India has still to decide whether to buy the super carrier or build it locally.