Testifying before the House Armed Services Tactical Air and Land Forces Subcommittee, Sean Stackley, assistant secretary of the Navy for research, development and acquisition, said the aircraft “was designed and built for the future, for high-end threat.”

As to the Marine squadron, it wasn’t immediately clear if Stackley was including the existing, non-deployable F-35B training squadron in his tally of three squadrons. The Marines said late last year they planned to field their third operational squadron sometime in 2018.

He added it was really a “false choice” to consider upgrading legacy aircraft instead of replacing them with the fifth-generation fighter that will be used by the Navy and Air Force, as well as the Marines.

The cost of keeping legacy aircraft flying “is hurting us today” and in some cases productions lines have slowed or closed and parts are not available.
Stackley did add the sea service will be flying a mixed fleet of fighters through the mid-2030s.

All the witnesses before the subcommittee said in various ways that the improvements in the past year “clearly reflect a program that is maturing” in holding down costs and improving repair, maintenance and availability. Its production rate in increasing through a combination of U.S. military builds, foreign military sales and delivery to allies who were production partners.
Like others, Stackley said the F-35 “is significantly more complex than the systems they are replacing” and production costs are higher than originally estimated in 2002.
The aircraft is “replacing or complementing a number of aircraft growing older,” Michael Sullivan, from the General Accountability Office, said. Its three variants are more versatile than the fourth-generation fighter, he added.

Air Force Lt. Gen. Christopher Bogdan, JSF program executive officer, said, “The history of developing airplanes has been murky” and potentially fraught with unexpected problems. He cited the unexpected takeoff of the F-16 in its first flight as an example.
Because of rising costs and delays to overcome problems, including most recently the safety of the ejection system and radar screens going blank, Bogdan said, “We do have a perception problem” that needs to be overcome. He said the F-35 will be participating in air shows here and in Europe and the Marine Corps and the Navy will bring media aboard ships that carry the aircraft to talk about what it is expected and can do. 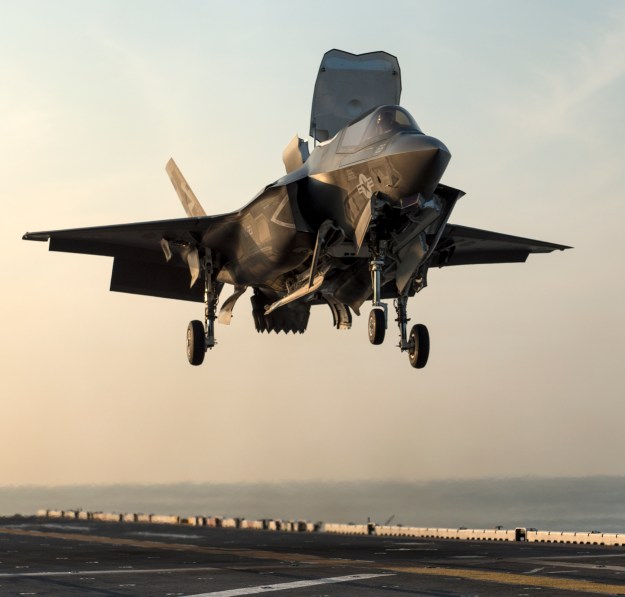 Addressing the ejection-seat safety issue, he mentioned three fixes expected to be in place by November: installing a switch to make adjustments for the pilot’s weight, re-examining the head support panel and reducing the weight of the pilot’s helmet.
He said the timing issue on the radar is also being worked, so that instead of having a blank screen every four hours it would rise to eight—with the goal of making even more rare an occurrence. Results are expected to be known in 30 days, he told the panel.

When asked whether the Pentagon should look to trying another joint aircraft program in the future, Bogdan said, “They are hard to do” because “sometimes it’s hard to meet all those requirements [from the services] outside of going to the lowest common denominator.”

The goal with the F-35 program in 2002 was 70 percent similarity in the three variants. Bogdan said that common engines and other shared parts would be useful in the future and hold costs down.
“Our beef on this has been the acquisition strategy” not the requirement for a next-generation strike fighter, Sullivan said of GAO’s reporting. In answer to a question on why there was a need to replace existing aircraft, he said, “I know Harriers are really old” and the F-35 has more capability.