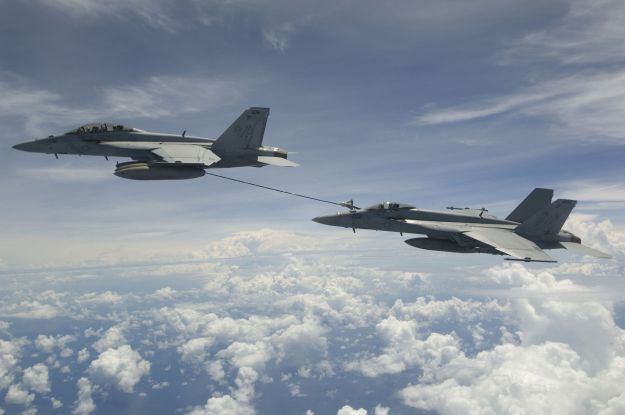 Carrier air wings are burning through the service life of the Boeing F/A-18E/F Super Hornets faster than anticipated, forcing the Navy to think about how to complete its tanker mission without further draining life from the fighters.

Super Hornets perform the tanking mission when air wings are deployed, but high operational tempos and a depleted legacy Hornet fleet – many of the jets are stuck waiting for their Service Life Extension Program (SLEP) maintenance work while the aviation depots try to work through a backlog – contributed to the Super Hornets reaching the end of their 6,000-hour service life several years sooner than expected.

Commander of Naval Air Forces Vice Adm. Mike Shoemaker, speaking at an event Wednesday hosted by the Center for Strategic and International Studies and the U.S. Naval Institute, addressed the Super Hornet fleet and its fast-approaching SLEP.

“If you look at the Super Hornet squadrons over our [Hornet] classics, they’re flying a couple extra sorties every day that are providing those tanker missions,” Shoemaker told USNI News after the event.
“So there is a cost to that tanker mission, but again it’s only while we’re deployed, and I think we’ve gotten smarter” about performing the tanker mission in a way that minimizes stress on the airframes.

The air boss said the Navy used to load the maximum five fuel tanks onto the Super Hornets before launching them into the air, which puts a lot of fatigue on the planes and reduces service life faster. Now, “we’ve gotten smarter in how we do the tanking missions, so we don’t use those five wet tankers unless it’s absolutely required, so that helps with the wear and tear.”

Shoemaker added that the Navy was looking at other ways to “shed some of those tanker responsibilities,” including using the Navy’s variant of the V-22 Osprey and the Unmanned Carrier-Launched Airborne Surveillance and Strike (UCLASS) platforms as tankers when they join the fleet.

The Navy will follow the Marine Corps and Air Force and buy into the V-22 program, using it as a replacement for the C-2 Greyhound for the carrier onboard delivery (COD) logistics mission. Though the Navy’s variant is being designed for the COD mission specifically, with a larger fuel tank to provide greater range, Shoemaker said the airplane is inherently flexible and the Navy would “look at other options” for missions to add on.

The Marine Corps has found ways to multi-missionize the Osprey, including adding a V-22 Aerial Refueling System, a sensor integration package, a digital interoperability communications package for passengers, weapons and more to the transport platform, Marine Corps Deputy Commandant for Aviation Lt. Gen. Jon Davis said at the same event. While Navy officials had previously discussed developing a “naval” variant that would be common between the Navy and Marine Corps, Davis said of the Navy’s V-22 variant, “they’ll chart their own course.” Shoemaker added that the Navy would learn from the Marine Corps but ultimately end of with a COD-specific V-22 variant.

Until either the V-22 or UCLASS can help take on the tanking mission, the Super Hornets will be the only plane covering that mission during deployments. Shoemaker said the Super Hornet fleet would not need different maintenance work done during the SLEP due to the tanking mission but rather the mission just added hours to the planes’ tally, bringing them to 6,000 faster.

When the first planes hit 6,000 hours late next year, the Navy and Boeing will work together on a service life assessment program to inform the SLEP, with Boeing focusing on the maintenance the planes tend to need to continue operating after that many flight hours and the Navy focusing on how to conduct the maintenance work without disrupting operational readiness. Shoemaker said the SLEP for the legacy Hornet fleet had its problems, and the service is trying to plan smarter the second time around.

“We expect to use the lessons from our legacy [Hornet fleet] … and the things we’ve learned inside the aviation depots, apply that with the work that Boeing will do on the initial airplanes, and then hopefully we’ll be able to have a sufficient capacity so when we get to all the Super Hornets and start SLEPing those we’re not seeing the same kind of Out of Reporting requirements we see right now in the classic force. Maybe a quarter of them or so would be out of service at any time to get that work done.”

With the legacy Hornet fleet, the aviation depots are backed up, keeping the legacy planes out of service for longer, disrupting current fleet readiness and forcing the Super Hornets to in turn burn through their service life faster as well. Shoemaker said the capacity of the aviation depots is improving, the depots’ ability to move planes through faster is improving, both of which will benefit the Super Hornet fleet when its SLEP begins – as soon as 2017 or 2018, despite a planned start of 2020.