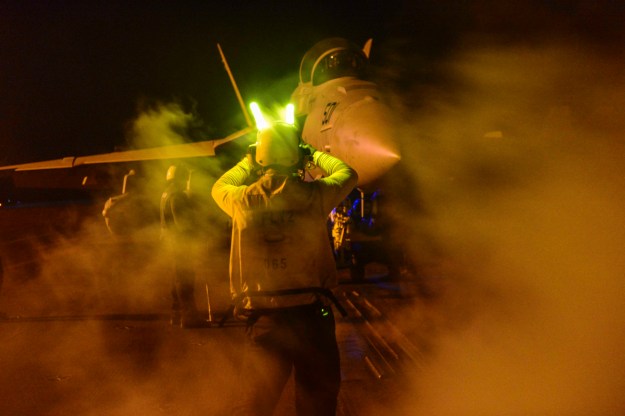 The Growler study, now being reviewed as part of a larger electronic warfare evaluation led by Deputy Secretary of Defense Bob Work, was led by the Navy with input from the other services.

“The study that we have going on right now is to determine — through a rigors analytical process — whether we have enough Growlers for the high-end joint war fight,” Rear Adm. Michael Manazir is director of air warfare on the staff of the chief of naval operations said following a Navy and Marine Corps aviation forum sponsored by the Navy League.
“We have enough Growlers to support Navy missions now with a 153 and what this study looks at is whether we should buy more for the joint fight.”

Now the study is percolating through the Office of the Secretary of Defense (OSD) and will move through the Joint Requirements Oversight Council (JROC) and will be used to inform the Fiscal Year 2017 budget due out next year, Manazir said.

“With a limited [budgetary total obligation authority], you’ve got to think hard about buying brand-new legacy airplanes versus next generation [ones] as we go forward,” he said on Tuesday reported Air Force Magazine.

Manazir responded to Carlisle’s comments saying the Growler would be able to cooperate with the emerging platforms.

The Growler is set to be an important node in the Navy’s emerging Naval Integrated Fire Control Counter Air (NIFC-CA) construct that will network together the aircraft and ships of the service’s carrier strike group.