HONOLULU (AP) — The fatal crash of the Marine Corps’ new hybridized airplane-and-helicopter aircraft during a training exercise in Hawaii over the weekend is renewing safety concerns about the machine.

But the Marines say the MV-22 Osprey has proven itself to be very safe despite high-profile accidents early in its operation.

The MV-22 Osprey went down Sunday at a military base outside Honolulu with 21 Marines and a Navy corpsman on board. The crash killed one Marine and critically injured another. Three Marines were still hospitalized in stable condition on Monday.

The governor of Okinawa in southern Japan immediately called for all flights of Ospreys to be suspended in his area until the cause of the crash is determined. The U.S. operates 24 Ospreys on Okinawa and announced a week ago that 10 more would be deployed to Yokota Air Base near Tokyo beginning in 2017.

The Osprey that crashed had taken off from the USS Essex, a Navy ship that was 100 miles offshore. It was flying to Oahu to drop off infantry Marines who were to train on land, said Capt. Brian Block, a spokesman for the 15th Marine Expeditionary Unit.

The crash, which the Marines initially called a hard landing, didn’t stop the unit’s exercises, Block said. The Marines also don’t plan to ground their fleet of Ospreys. 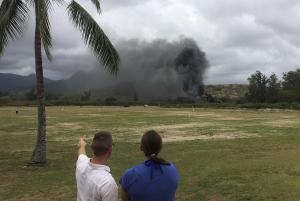 In this May 17, 2015 photo, a man and woman look toward smoke rising from a Marine Corps Osprey airc …

“We’re continuing to train in order to make sure we remain sharp and ready for whatever comes up during deployment,” he said.

The unit, which is based in Camp Pendleton, California, recently left home for a seven-month deployment to the Pacific and the Middle East.

Built by Boeing Co. and Bell, a unit of Textron Inc., the Osprey program was nearly scrapped after a history of mechanical failures and two test crashes that killed 23 Marines in 2000.

Those crashes prompted the Marine Corps to put a lot of effort into training pilots and eliminating sources of risk, said Loren Thompson, an analyst at the Lexington Institute, a think tank based in Virginia.

The aircraft also has features that make it safer than normal helicopters, like rotors that automatically collapse on landing to reduce the dangers of a hard landing, Thompson said. 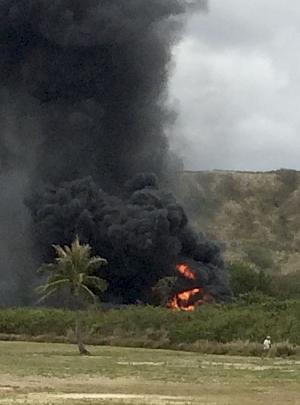 In this May 17, 2015 photo, smoke rises from a Marine Corps Osprey aircraft after making a hard land …

The Osprey has deployed to Iraq and Afghanistan since its introduction to the fleet. The Marine Corps has been using it the Himalayas this month to help with earthquake disaster relief in Nepal.

For every 100,000 flight hours, the Osprey has had 3.2 mishaps involving loss of life or damage exceeding $2 million, Marine spokesman Capt. Ty Balzer said in an email. That compares with a rate of 2.98 per 100,000 flight hours for the CH-46 Sea Knight helicopters the Ospreys are replacing.

Further, he said the Osprey had the lowest serious-mishap rate of all Marine rotorcraft in the first 200,000 flight hours of its existence. The MV-22 has now been in the air for a total of 223,000 flight hours, Balzer said.

Thompson said Sunday’s crash was a tragedy but wouldn’t slow down the Osprey “because the aircraft has proven itself in combat.”

The Osprey can take off and land like a helicopter, allowing it to go almost anywhere. Yet it can also fly as far and as fast as an airplane, giving it longer range than a traditional helicopter. These attributes made the Osprey the aircraft of choice when Marines rescued a downed Air Force pilot from a remote area of Libya in 2011.