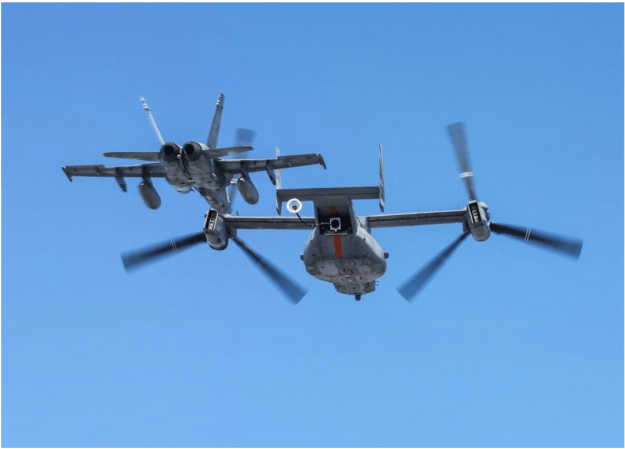 The Navy has no immediate plans to explore using its planned fleet of V-22 Ospreys carrier onboard delivery aircraft to refuel its carrier aircraft, while the Marines are actively looking to include a tanking capability in its own tilt-rotor V-22s by 2017, service officials told USNI News on Monday.

Last year, the Navy selected the Bell Boeing V-22 to be the replacement for the service’s aging fleet of Northrop Grumman C-2A Greyhoud carrier onboard delivery (COD) that’s used to bring on supplies and material from shore to an embarked aircraft carrier.

While the has Navy touted some benefits of selecting the Osprey — its easier to get supplies to a ship at long range since the V-22 can land on more ships, not just the carrier — it’s not talked about the using the Navy Osprey as a refueling platform.

“While there is always a potential to leverage other V-22 capabilities down the road, our focus remains on seamlessly transitioning the Navy variant of the V-22 into the airwing to fulfill the carrier onboard delivery mission,” Navy spokesman Lt. Rob Myers told USNI News on Monday.

For its part, the Marines are currently developing the V-22 Aerial Refueling System (VARS), which is being developed in parallel with the planned first Lockheed Martin F-35B Lightning II Joint Strike Fighter deployment in 2017, according to the Marine Corps’ 2015 aviation plan.

Similar to the Harvest HAWK roll-on weapons kit for the Marine’s Lockheed Martin KC-130J, the system will be able to roll on and off the aircraft as needed, USNI News understands.

The goal of VARS is to include an organic tanking capability to the Marine Air Combat Element (ACE) of an embarked Marine Expeditionary Unit (MEU) starting with tactical fighters and then moving into other aircraft.

For the Navy, the next tanking option is less obvious.

At the moment, the service’s Boeing F/A-18 E/F Super Hornets serve as the tanking platform for the carrier. The Navy has expressed concern it’s burning through its fighter flight hours faster than anticipated in part due to the tanking mission.

Up to 20 percent of Super Hornet sorties from a U.S. carrier are tanking missions and the Navy is very interested in taking the burden of the strike fighter force, USNI News understands.

How service will get there isn’t clear.

The service didn’t include an aerial refueling capability in its COD requirements, USNI News understands.
Lockheed Martin, in its bid to replace the COD C-2s proposed refurbishing old S-3 Viking anti-submarine warfare (ASW) into a COD that could refuel from the carrier but lost out to the Bell-Boeing V-22 COD.

The NAVAIR’s preferred set of requirements for the Unmanned Carrier Launched Surveillance and Strike (UCLASS) also includes the ability for the unmanned aerial vehicle to tank other aircraft.