The Navy’s most technologically capable carrier, cruiser and destroyer are shipping out for a Middle East deployment on Monday, according to a release from Fleet Forces Command.

USS Theodore Roosevelt (CVN-71), guided missile cruiser USS Normandy (CG-60) and a squadron of Northrop Grumman E-2D Advanced Hawkeye maritime surveillance aircraft form the backbone of the capability that creates a network of sensors and shooters the service promises to greatly extend the lethal range of the CSG.

Roosevelt completed a $2.6 billion refueling and complex overhaul (RCOH) last year and its crew and the sailors of the CSG have been conducting preparatory exercises since the start of this year. 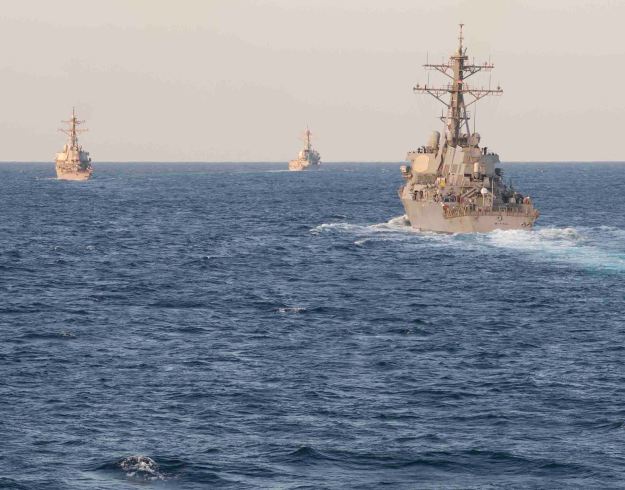 The following is the March 5, 2015 release from U.S. Fleet Forces Command

NORFOLK, Va. – More than 6,000 Sailors serving aboard the five ships of the Theodore Roosevelt Carrier Strike Group are scheduled to depart their homeports of Norfolk, Virginia and Mayport, Florida Monday.

Theodore Roosevelt is departing from Norfolk to conduct a world deployment and return to her new homeport in San Diego. The aircraft carrier’s change in homeport is part of a three-carrier shift involving USS Ronald Reagan (CVN 76) and USS George Washington (CVN 73).

While deployed, the strike group will serve in the 5th and 6th U.S. Fleet areas of responsibility conducting maritime security operations, theater security cooperation efforts and missions in support of Operation Enduring Freedom.