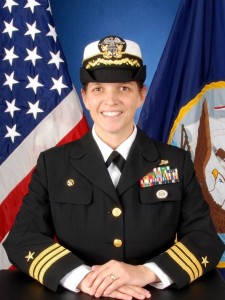 Last year, two pilots were killed when high seas swept a chained helicopter off the flight deck of the destroyer William P. Lawrence.

The ship’s commanding officer, Cmdr. Jana Vavasseur, who ordered the ship to top speed in dangerous conditions on the Red Sea, has now been selected for major command, according to the Navy’s recent screening board results.

Vavasseur’s selection has prompted outrage in the aviation community, particularly among the wives of the deceased pilots and the spouses of aircrew still serving.

“She is able to continue on and get promoted, and enjoy her accolades and the praise, while we deal with darkness,” said Theresa Jones, the widow of deceased pilot Lt. Cmdr. Landon Jones, who was lost at sea along with Chief Warrant Officer 3 Jonathan Gibson. Neither body has been recovered.

In a Nov. 25 phone interview, Jones said she and others are writing letters to Navy leaders in an attempt to forestall Vavasseur’s selection for major command, which qualifies her to lead prestigious fleet commands like cruisers, amphibious assault ships and destroyer squadrons.

“The main two things we wanted as wives and families left behind: We wanted justice; we wanted there to be consequences,” Gibson’s widow, Chrissy, told Navy Times in a Nov. 26 phone interview. Gibson said Vavasseur’s selection is anything but.

Vavasseur’s promotion is a “slap in the face” to aviators and their families, said the spouse of a current helicopter pilot, who asked to remain anonymous to avoid career repercussions for her husband.

The promotion is the latest turn in the controversy. A high-profile investigation into the crash released in May ultimately faulted Vavasseur for poor judgment, finding the cause of the tragedy had been preventable: racing through the 7-foot seas before the MH-60S Knighthawk crew had secured the helo and disembarked.

Vavasseur finished her tour and moved on to shore duty in early 2014. She has since been serving as assistant chief of staff for force training at Naval Surface Force Pacific, SURFPAC spokesman Lt. Rick Chernitzer told Navy Times.

Vavasseur, 42, denied an interview request through the SURFPAC spokesman. SURFPAC declined to comment on Vavasseur’s selection to major command.

The incident unfolded in the early afternoon of Sept. 22, 2013, when Gibson and Jones landed their helicopter on William P. Lawrence. The destroyer’s next task was to rendezvous with the aircraft carrier Nimitz.

Following the landing, Vavasseur ordered the ship turned 5 degrees. Though the helo had been chocked and chained to the flight deck, its rotors were still turning and all five aircrew were inside.

Then Vavasseur ordered flank speed. A 12-degree roll sent the ship rocking, but she ordered the speed held at 30 knots to pick up escort duty for the Nimitz. Two minutes later, a “wall of water” came over the starboard side, one witness recalled, breaking the helo’s rotor and the chains holding it down, and sliding the whirling chopper off the deck.

Three aircrewman were pulled from the water that afternoon, but by the following day, 5th Fleet announced they had called off the search for the pilots and helicopter.

The subsequent Navy investigation found that Vavasseur was operating within the allowable flight envelope for a chocked and chained helo with 7-foot seas. Further, the investigator wrote, frigate and destroyer COs are not properly trained on such a specific set of circumstances.

On the other hand, this tragedy could have been prevented had the ship given the helo time to power down and disembark before coming up to top speed in what were very choppy seas, officials said.

“There was time to rectify the situation by simply reducing speed after taking [the helo] aboard; a significant reduction in speed, thereby creating a more stable platform, could have been achieved in seconds,” wrote Adm. Harry Harris, the Pacific Fleet boss, in his final endorsement of the report.

Harris said he expected COs to problem-solve, like in this case taking time to secure the helo and its crew before coming up to speed. Another option would have been to notify the Nimitz the destroyer would be delayed.

“I expect my commanding officers to exercise independent thought and sound judgment,” Harris wrote in his note, closing the command investigation.

In his recommendations, Harris ordered safety standdowns for all frigates and destroyers to discuss helicopter flight operations in rough seas. He also ordered a review of ships’ operating parameters for wind, sea state, pitch, roll, ship’s speed and wave height during H-60 operations.

Chernitzer confirmed Nov. 26 that the Navy is reassessing procedures to prevent such a mishap from re-occurring, though still in the planning and approval process.

But Harris did not make the final call on Vavasseur’s career. Leaders of the surface Navy decided the appropriate remedy should not be career-ending.

When the investigation was finished in late spring, Vavasseur received a counseling letter, according to Navy officials. Counseling letters are typically not punitive, said chief of naval personnel spokesman Cmdr. Chris Servello, and are not normally included in an officer’s personnel file. If the letter was not included, then it would not have been considered by the major command selection board.

An adverse fitness report would be considered, according to Navy regulation, but because Vavasseur wasn’t punished for the incident, it’s likely that the crash wasn’t part of her most recent report.

All told, six commanding officers signed off on the command report, with Pacific Fleet’s Harris making the final determination.

Of those six, only Naval Air Forces boss Vice Adm. David Buss thought Vavasseur was at fault, despite the rough, unpredictable seas. Harris sided with Buss and placed the blame on Vavasseur.

Some have characterized the disagreement as a dispute between surface warfare officers and aviators, when in fact there was little agreement among the aviators. Of the seven officials, including Harris, five of them were naval aviators.

Many are wondering how, when so many COs are fired for sexual harassment or collisions, Vavasseur was able to keep her job and possibly take on command of a larger ship.

For her part, Jones has written letters to Navy Secretary Ray Mabus and Chief of Naval Operations Adm. Jon Greenert, and encouraged her friends to do the same.

Vavasseur has never apologized to her — or even reached out to offer sympathy, Jones noted.

Neither of those things has happened, she added, and now she feels betrayed that Vavasseur will receive a major promotion instead.

Though Vavasseur was selected for major command, she has not yet been assigned. The detailing process would look at her record and make the ultimate decision as to whether she commands a cruiser, a big deck gator, or a DESRON, which entails less direct responsibility for safely operating a ship.

In fact, it’s possible that the detailing process could find her unfit for the commands available, in which case she wouldn’t be promoted at all, one Navy source familiar with the screening process said.However, Jones said, she would be concerned if she was a spouse of a pilot assigned to Vavasseur’s ship.”These guys, they don’t have a choice,” she said. “If they’re told they have to fly onto the ship, they have to fly onto the ship, and this person can operate it in any way they see fit.”