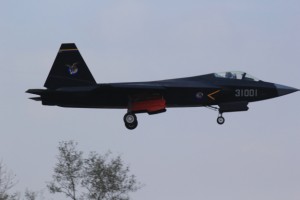 “They’re still in the glossy brochure phase of development, so they still look ten feet tall and bulletproof,” one senior U.S. fighter pilot familiar with the F-35 program told USNI News.
“I think they’ll eventually be on par with our fifth gen jets — as they should be, because industrial espionage is alive and well.”

“They sure look like F-35 and F-22s don’t they?” one Air Force operational test pilot told USNI News.

“They’ll probably be a handful right off the bat for all of our fourth gen stuff,” the pilot said.

One former Air Force fighter pilot extensive experience with foreign hardware told USNI News potential air battles might be more about sheer number of jets the Chinese might be able to put into the air versus the superior training of U.S. pilots.

“I worry about numbers more than particular platforms,” the former fighter pilot said.
“I imagine their jets and their weapons are pretty good. Don’t know about the pilots or their capacity to employ.”

Further, the retired pilot noted, airshows are designed to show off weapons to potential buyers, but offer no real information about what jet can really do during an actual combat mission.

“Just remember that airshows are exactly that — airshows.” the former pilot said. “Airshows provide no real clue to capabilities. As such, airshows generally rely on spectacular maneuvers to garner attention without providing substance. No different from the F-15C or the F-22.”

One current Air Force test pilot told USNI News that it would be difficult to gauge just how good the Chinese jet will be.

“Overall at this stage they’re not [operational] so it’s hard, for anyone to truly make a reasonable assessment,” the test pilot said.

There are still many unanswered questions about how the Chinese will operate their aircraft and what kinds of weapons the jets will carry. Perhaps the most important question is how good are the Chinese radars and other sensors compared to their American equivalents.

“How well will organic sensors work to support those weapons?” the test pilot asked rhetorically.

For U.S. industry officials, the J-31’s debut at the Zhuhai airshow signals that the Chinese are planning on selling the jet on the open market.

“I would characterize the J-31 flying at the Chinese airshow as ‘incremental and measured,’” a senior industry official told USNI News.

“There have been some reports that the J-31 maybe be exported. If so, then showing it off makes even more sense to attract prospective buyers,” the official said.

The Chinese are making a lot of progress in developing their aerospace industry.

However, jet engines remain a weak spot for China.

“They have yet to field many of their “new” designs in any quantities,” the industry official said.
“Time will tell.”

Meanwhile, the Russia’s advanced Sukhoi Su-35 Flanker-E is also making it debut at the Zhuhai airshow.

The Chinese are reportedly interested in the purchase of 24 examples of the modernized Russian-built jet.

There has been much media speculation that the Chinese intend to reverse engineer the aircraft as they have with previous Flanker variants.

“I view the Su-35 buy as a conservative stop-gap measure while they wait for the J-20 and J-31 to enter service,” the industry official said.
“Gotta have aircraft to have an air force.”