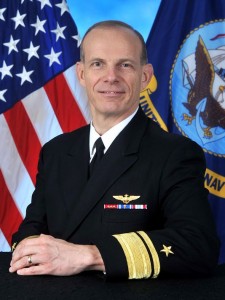 A career naval aviator with 3,500 flight hours and more than 1,000 carrier landings has been selected to command Naval Air Force Atlantic in Norfolk, Virginia, the Defense Department said Tuesday.

Rear Adm. John Haley, the director of global operations at U.S. Strategic Command, will take over for Rear Adm. Mike Shoemaker, according to the DoD release. Shoemaker is moving out west to take over Naval Air Forces and Naval Air Force Pacific in San Diego.

Haley graduated from the Naval Academy in 1980 and went on to fly the A-6E Intruder as a flight officer until 1989, when he was re-designated a pilot. He flew the Intruder in combat missions during Operation Desert Storm before transitioning to the EA-6B Prowler in 1995.

He has previously commanded the George Washington carrier strike group, the carrier Theodore Roosevelt, the command ship LaSalle and Electronic Attack Squadron 136 aboard the carrier Independence.

Also ashore, Haley has served as deputy chief of staff at U.S. Pacific Command and director of operations and plans for the chief of naval operations.