An F-35C Lightning II, the carrier variant of the Joint Strike Fighter, made an arrested landing aboard a flattop today, an important milestone both in the development of the stealth fighter and in naval aviation history. 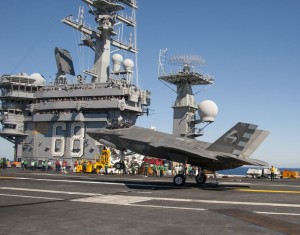 Navy test pilot Cmdr. Tony Wilson landed his F-35C on the flight deck of the aircraft carrier Nimitz off the coast of San Diego at 12:18 p.m. Pacific Time, according to a news release from Naval Air Forces.

The landing, in which the redesigned tailhook worked flawlessly, marked the beginning of initial at-sea developmental testing for the F-35C, which is expected to last two weeks.

“Today is a landmark event in the development of the F-35C,” said Wilson, a pilot with Air Test and Evaluation Squadron 23, in the news release. “It is the culmination of many years of hard work by a talented team of thousands. I’m very excited to see America’s newest aircraft on the flight deck of her oldest aircraft carrier, the USS Nimitz.”

“What a historic day today is for naval aviation. With the first traps and catapult launches of the F-35C Lightning II aboard an aircraft carrier, we begin the integration of the next generation of warfighting capability into our carrier-based air wings,” said Buss in the news release. “This important milestone is yet another indicator of naval aviation’s ongoing evolution to meet future threats and remain central to our future Navy and national defense strategy.”

During Developmental Testing I, the first of three at-sea test phases planned for the F-35C, two test aircraft from Naval Air Station Patuxent River, Maryland, are expected to perform a variety of operational maneuvers, including catapult takeoffs and arrested landings. A team from the F-35 Lightning II Pax River Integrated Test Force has also planned general maintenance and fit tests for the aircraft and support equipment, as well as simulated maintenance operations.

They are gathering data to integrate the F-35C into flight deck operations and define its operating parameters aboard the carrier, according to the release.

The goal is to ensure the fighter is ready to deploy to the fleet in 2018.

The F-35C will enhance the flexibility, power projection and strike capabilities of carrier air wings and joint task forces and will complement the capabilities of the F/A-18E/F Super Hornet, the Navy’s premier strike fighter.