Home » News » That was a close one! Blue Angel buzzes Golden Gate Bridge

That was a close one! Blue Angel buzzes Golden Gate Bridge 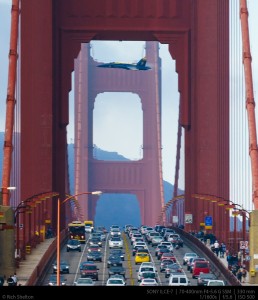 If you look closely at the above photo, you’ll realize it’s not just another shot of the Golden Gate Bridge during weeknight rush hour. That’s right — there’s a blue and gold fighter jet zooming right between the towers.

Lt. Cmdr. David Tickle flew his F/A-18 right over the bridge during San Francisco Fleet Week airshow practice on Oct. 9, and Tiburon, California, resident Rich Shelton just happened to be there to capture it.

“On Thursday practices I normally go to this spot because they do a number of test passes across the bridge,” Shelton told Navy Times on Oct. 22.

He climbed to the top of some World War II bunkers just south of the bridge, then waited for the magic to happen.

“They don’t always make many passes between the towers, so I was very lucky to catch this shot with my relatively slow camera!” he said.

Nothing went wrong, but it does seem that flying right over rush hour traffic could be a distraction for drivers.

‘While a challenging show to fly, San Francisco, like each of our shows, is conducted under the oversight of the Federal Aviation Administration and Blue Angel safety observers,” she said in an Oct. 23 email to Navy Times.

Before each season, the Blues do a site survey of each show location with the FAA to anticipate any issues ahead of time, to make sure pilots, show observers and the surrounding population are safe, Daniel said.

Then the squadron and the FAA come up with flight rules for where to fly and which maneuvers to perform in each area.

“In accordance with the FAA guidance, and as shown in the photo, we only fly straight and level over the Golden Gate Bridge,” Daniel said. “The more well-known Blue Angel aerobatic maneuvers are flown in areas away from drivers and the local population.”