Navy drone flies alongside fighter jets for the first time

The movement of jets aboard an aircraft carrier flight deck is often compared to a ballet, with sailors in multicolored shirts guiding fighter pilots and their jets in a tightly choreographed dance.

So what happens if you add a robot to the human performers?

The Navy attempted to answer that question Sunday aboard the aircraft carrier Theodore Roosevelt, where, for the first time, the service’s prototype of an unmanned stealth plane, the X-47B, took off and landed on a carrier flight deck alongside traditional fighter jets. 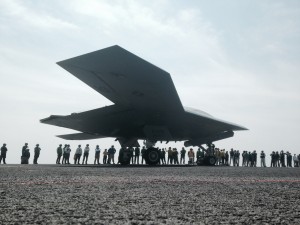 The Navy’s prototype of an unmanned stealth plane, the X-47B, took off and landed on the flight deck of the Theodore Roosevelt alongside traditional fighter jets for the first time. (Mike Hixenbaugh | The Virginian-Pilot)

The experiment off the coast of Virginia was a glimpse into the future of naval aviation, said Rear Adm. Mat Winter, who oversees the Navy’s unmanned aviation and strike weapons program. The Navy plans to someday integrate an entire fleet of automated drones such as the X-47B into its carrier air wings – not to replace piloted aircraft, Winter said, but to complement them.

“What you saw today was history,” Winter told reporters after the first in a series of exercises planned aboard the ship this week. “It’s the next step in our understanding of how technologies come together to provide tactical capabilities.”

If the operation of a flight deck is indeed a dance, it’s fair to say the X-47B prototype was a hair off beat during its first performance with other jets Sunday. Its timing wasn’t as sharp – its execution of routine maneuvers not quite as crisp – as its manned counterparts. But that was to be expected, officials said, declaring the test run a success.

“This is the first time we’ve ever tried it,” said Capt. Beau Duarte, a program manager who works for Winter, emphasizing that this is only the fifth time the X-47B has even been on a carrier. With practice, Duarte said, the Navy believes it can integrate unmanned aircraft without having to totally rewrite its policies governing flight deck movements.

The test exercise started off slow.

Just before noon, an F/A-18Hornet launched off the Roosevelt’s deck. The X-47Bwas to follow shortly after. Instead, it sat attached to the catapult for about 30 minutes as the Hornet circled above.

The problem was more with the ship than with the aircraft, though. The flight deck was angled slightly down toward the bow and needed to be rebalanced – a common issue at sea that puts aircraft at risk of hitting the water after takeoff. Traditional fighters can take off under those conditions, but officers running the test operations were being extra careful with the experimental aircraft.

After finally launching, the X-47B – which moves autonomously while airborne and by remote control while on the flight deck – flew in formation with the Hornet before lining up a couple miles away to land. Its automated tail-hook caught the third of four arresting wires and skidded to a stop: a perfect landing.

Its wings folded up, and the tail hook retracted automatically. But it took longer than planned for the flight deck operators to maneuver the aircraft off the landing strip.

As a result, landing signal officers were forced to wave off the Hornet that was coming in to land behind it. The pilot passed overhead, circled around and landed a few minutes later.

The second test cycle went smoother. The X-47B took off a few minutes after the Hornet. And after landing, it moved off the landing strip in about 90 seconds, longer than the minute most human pilots typically need to taxi out of the way but still leaving plenty of time for the Hornet to land behind it.

An officer in a yellow vest – one of the sailors responsible for directing flight deck traffic and giving pilots the OK to take off – turned to the man standing next to him.

“Not bad,” the officer said, nodding in approval.