The decommissioned USS Saratoga has left the Newport Naval Station. The weather finally cleared for the ship’s departure for 8:45am Thursday.

The Saratoga is heading down the eastern seaboard and around the tip of Florida to Brownsville, Texas where it will be pulled apart for scrap.

The 1950’s aircraft carrier was decommissioned 20 years ago. An effort failed to turn it into a museum and it sat in Newport for sixteen years.

Naval Station spokeswoman Lisa Rama said the Saratoga’s departure has left a hole in the landscape.

“Not to make any comments about productivity on board Naval Station Newport this morning, but there were quite a few folks standing outside their offices to watch her go,” said Rama. “It’s sad. It definitely is sad. There’s a hole down there in Pier 1.”

Rama said it will take the decommissioned USS Saratoga about a month to reach Texas.

You can follow the Saratoga online here. You can send us your photos of the USS Saratoga’s departure on Twitter @RINPR. 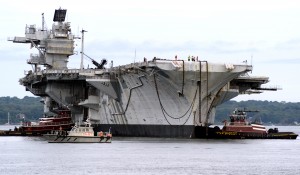 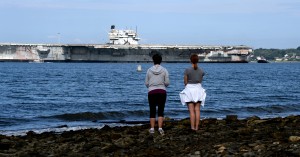 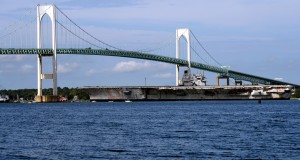