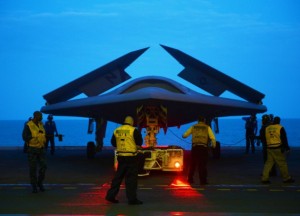 The Navy’s UCAS demonstrator made history as the first drone to take off and land from an aircraft carrier.

WASHINGTON: August is the month of decision for UCLASS, the Navy’s controversial program to build armed drones that fly off aircraft carriers. At stake: whether the “Unmanned Carrier-Launched Surveillance & Strike” aircraft will be primarily a scout (surveillance) or a bomber (strike). The new Deputy Secretary of Defense, Bob Work, delayed the Navy’s release of an official Request For Proposals (RFP) while he studied the question, with a crucial meeting in the new few weeks.

“UCLASS is one of our new starts, so we want to make sure we get the requirements right,” said Under Secretary Frank Kendall, the Pentagon’s top weapons buyer, to reporters after a speech this morning. “The deputy secretary’s asked to take a look at it before we let the RFP out, and we’re going to do that.”

How hard a “look” will they take? The man who is simultaneously Congress’s leading champion of UCLASS and its leading critic has no confidence that Pentagon leadership will seriously challenge the Navy’s current requirements. “I do not have those signs that they are doing that,” said House seapower subcommittee chairman Randy Forbes in a recent interview. “I have no reason to believe,” he told me, that the Pentagon is conducting a genuine “relook” rather than a pro forma exercise.

Forbes has championed UCLASS as a potential solution to the growing problem of “anti-access/area denial” defenses that could keep out conventional forces. He has sharply criticized the Navy’s plan for the program as falling far short of that potential.

“The question is, what is the mission that we’re going to need these platforms to perform?” Forbes told me. If UCLASS’s primary role is ISR (intelligence, surveillance, and reconnaissance), and the ability to strike targets is secondary, “then I think you can say they’re headed in the right direction,” he said. But the military has plenty of long-range surveillance aircraft already, he argues: the Navy alone is buying two new systems, the unmanned MQ-4C Triton and the manned P-8 Poseidon, although neither can fly off a carrier as UCLASS will. By contrast, only the twenty aging B-2 bombers have the combination of range, bombload, and stealth required to strike deep into well-defended airspace, and they lack the speed to escape if an enemy does detect them.

The current UCLASS requirements, however, prioritize ISR over penetrating advanced defenses. “The intent is to provide an an affordable, adaptable multi-INT platform that supports missions ranging from permissive counter-terrorism (CT) operations, to missions in low-end contested environments, to providing enabling capabilities for high-end denied operations, as well as supporting organic Naval missions,” said Mark Andress, the Navy’s “Assistant Deputy Chief of Operations for Information Dominance,” in a statement to Breaking Defense. Note the emphasis on UCLASS’s “enabling” and “supporting” role, especially in airspace where easy US access is “denied” by a “high-end” threat.

While stealth requirements are highly classified, payload and range are public: UCLASS must be able to conduct a 14-hour mission — either an ISR patrol or a 2,000-mile-plus strike — without refueling and while carrying at least a single 500-lb bomb, with a maximum internal bombload of at least 1,000 pounds. Compared to the carrier variant of the F-35 Joint Strike Fighter, this is about three times the range but only one-quarter the bomb load.

14 hours’ endurance is a priority, Andress told Forbes’ subcommittee last month, because it is the most cost-effective, technologically doable option. Cost “was a huge driver in the AOA [analysis of alternatives],” Andress said. An aircraft with 24 hours’ endurance was the most cost-effective to operate but potentially too big to fly off an aircraft carrier. (He didn’t specify why, but long range generally requires not only big fuel tanks but a big wingspan for fuel-efficient flight). A 14-hour aircraft was the biggest they could confidently fit on the carrier.

An 8-hour aircraft, by contrast, cost “dramatically” more to operate over its service life, he said, in fact “more than four times” as much. While Andress didn’t give much detail, the Navy wants the capability to keep at least one UCLASS on a surveillance patrol up to 1,200 miles from the carrier at all times. Doing that with an 8-hour UCLASS instead of a 14-hour one would require either buying more aircraft to keep up that 24-7 presence, having each aircraft take off and land more often (a major source of wear, tear, and accidents), or using aerial refueling tankers, themselves a expensive asset.

Of course, if you take away the requirement for 24-7 patrols and focus instead on the strike mission, those cost calculations would all change. But it’s worth remembering that the United States military does not, in fact, spend most of its time blowing stuff up. Even in wartime, as the last 13 years have shown, commanders’ demands for ISR are insatiable: You have to know where the enemy is before you can bomb him or effectively avoid him. So there’s a reasonable argument that UCLASS needs to spend the majority of its time scouting for targets, not striking them.

Navy officials say the aircraft they envision will be able to do both — eventually. While a 1,000-pound internal bombload is the minimum or “threshold” requirement that UCLASS must meet on its entry into service, the requirements also call for the potential to carry more weapons as the aircraft is upgraded. “In fact, we have seen designs that carry considerably more than that 1,000 lbs,” said Vice Adm. Paul Grosklags, the Navy’s senior uniformed acquisition official, although using all that capacity may reduce range. Even when it comes to stealth, which must be designed into an airframe from “day one,” Grosklags told Forbes’s subcommittee, “we know that there are technical solutions out there that provide us the capability to grow to a more survivable, low-observable platform if we decide to go down that path.”

Other witnesses were more skeptical. As a matter of physics, optimizing an aircraft for long-range, fuel-efficient flight inevitably compromises stealth, speed, and bombload, said Richard Martinage of the Center for Strategic and Budgetary Assessments, a former Navy official himself. Worse, it does so in ways that are built into the design and not easily upgraded away: “These reductions in survivability and payload cannot be bought back later.”

Industry and the Navy would disagree. They’re self-interested, of course, but then Martinage acknowledges he’s not seen the full requirements — which are classified — let alone the closely guarded competing designs. So neither side’s analysis is 100 percent reliable.

If UCLASS is to reach its full potential as a strike aircraft, the crucial question is whether industry will deliver a design that affordably exceeds the minimum requirements — either immediately or eventually once upgraded. Getting such good results is a chronic problem, because it requires not only good engineering but clever contracting.

“What the Department tends to do, when it writes requirements for a new program, is it writes down a list of objective requirements and a list of threshold requirements,” Under Sec. Kendall said in a speech on acquisition reform today. “In industry, what we routinely did was ignore that objective, because we knew we were going to be selected based on the cost of getting to the threshold …. The source selections didn’t give you any credit for getting beyond that.”

“In areas of performance where we care operationally about the result, [where] we just do better on the battlefield, we ought to give industry a reason to give us a better product, if they can do so cost-effectively,” he told the industry group AFCEA. “[So] what we’ve done on a few acquisitions — and we’re going to be doing more of these — is we’ve tried to define best value and define the difference between threshold-level performance and objective-level performance in dollars, so that you know what we’re willing to pay for the increased performance….It gives industry a reason to bid above the threshold, to give us more performance, to be innovative.”

Kendall wasn’t speaking specifically about UCLASS — that question came later — but about acquisition and “Better Buying Power” in general. Nevertheless, the approach he outlined might just be the only way to make an affordable surveillance drone evolve into a stealthy bomber.