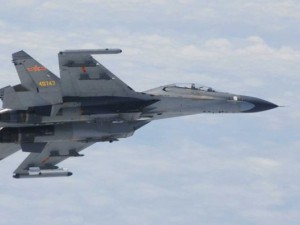 The Chinese Defense Ministry on Saturday called U.S. criticism of an encounter between one of its jets and a U.S. Navy surveillance plane “totally groundless.”

In his statement Saturday, Yujun also called on the U.S. to stop short-range reconnaissance missions near China, claiming that the U.S. move is what prompted the Chinese jet to make a regular identification and verification, and that such maneuvers threaten the safety of both sides’ military.

On Friday, Kirby labeled the actions of the Chinese pilot “aggressive and unprofessional.” The Pentagon has expressed its “strong objections” with the Chinese government over the maneuvers.

In one pass, the Chinese fighter showed the P-8 pilot the belly of the aircraft to show its weapons.

The incident marked at least the fourth time in 2014 that a Chinese warplane has buzzed U.S. military aircraft, according to the Pentagon.