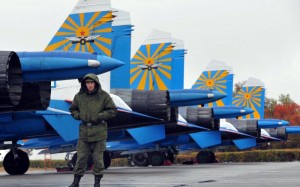 Russia may not have boots on the ground in Iraq—yet. But it will have them in the sky; Russian pilots could be flying over Iraq within days.

While the Obama administration struggles to speed up delivery of U.S. military assistance to the government of Iraq, Vladimir Putin has already delivered not only fighter jets but also the pilots needed to fly them, diplomatic sources told The Daily Beast.

On Monday, Russian television trumpeted the arrival of the first five of 12 promised Sukhoi Su-25 combat fighter jets to the Iraqi government, saying it had also sent “trainers” to help the Iraqis use them. Gen. Anwar Hama Ameen, the commander of the Iraqi Air Force, told The New York Times the fighter jets would enter the battle against ISIS within a few days, after which the Russian trainers would leave Iraq. He said Iraq had plenty of pilots with “long experience” flying the Su-25. The Russian ambassador to Iraq also said Russian pilots would not fly missions inside Iraq.

Perhaps. But diplomatic sources told The Daily Beast that Russian pilots will fly the planes due to a lack of Iraqi pilots with the proper training. Neither Russia nor Iraq as explained how the Iraqi air force could possibly have pilots trained and ready to fly the Russian fighters. The Su-25 planes were used in the Iraq-Iran war but have not been employed in Iraq since at least 2002, when Iraq’s military was controlled by the Baathist regime of Saddam Hussein.

The Russian assistance to Iraq is not a strategic decision by Moscow to commit to a long-term security relationship with Iraq, the sources said, but rather a limited measure to address the ISIS crisis. It’s also a convenient way to draw a public distinction between Moscow and Washington, whose direct military assistance to Iraq has been minimal and slow. 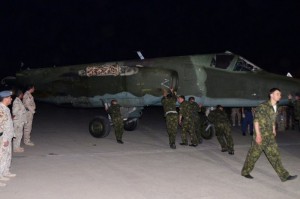 “This is very opportunistic and it opens up a lot of questions about that relationship, where it’s going, and how Russia is aligning itself in Iraq,” a senior congressional aide told The Daily Beast on Monday. “It’s definitely something we should be concerned about but it’s not panic time yet.”

If and when Russian jets begin to fly in Iraq, they will be entering an ever more crowded airspace that reportedly includes U.S. and also Iranian drones. But the U.S. is not currently working directly with Russia on tactical or logistical military coordination in Iraq—even though Moscow and Washington suddenly face a common foe there.

President Obama and President Putin spoke over the phone last week as the Iraq crisis worsened. But the conversation focused almost solely on Ukraine; the two leaders didn’t discuss Iraqi substantively much at all.

“As you probably saw, Iraq was not listed as a topic in our recent call readout. We did not mention Iraq because the President and President Putin did not have a substantive discussion on Iraq,” National Security Council Press Secretary Caitlin Hayden told The Daily Beast. “To the extent it was discussed, the two leaders agreed that Secretary [of State John] Kerry would discuss with Russian Foreign Minister [Sergei] Lavrov, given Secretary Kerry’s recent travel to Iraq.”

President Obama announced Monday he would send an additional 200 American military personnel to Iraq, to protect the Green Zone and provide intelligence support. But last week the president ruled out direct U.S. involvement in combat inside Iraq for now.

“American forces will not be returning to combat in Iraq, but we will help Iraqis as they take the fight to terrorists who threaten the Iraqi people in the region and American interests as well,” he said.

If Russian pilots begin flying attack missions in Iraq, Moscow will be doing the job Iraq Prime Minister Nouri al-Maliki first asked of the United States. Russia likely won’t officially acknowledge its pilots’ role, if they do carry out strikes or air support missions for Iraqi government troops. Similarly, in the Syrian civil war, there are unconfirmed reports that pilots from North Korea are flying jets in combat.

“We don’t oppose legal Iraqi efforts to meet their urgent military requirements,” she said. “In fact, as you know, we’re expediting our own assistance, and they have purchased military equipment from a variety of countries in the past, and so it’s not a surprise that that has continued.”

The administration has been trying to speed up the delivery of F-16 fighter jets and 24 Apache helicopters to Iraq. U.S. lawmakers, including Senate Foreign Relations Committee Chairman Bob Menendez, previously held up those transfers over concerns about Maliki’s authoritarian tendencies and mistreatment of Iraq’s Sunni minority. Menendez lifted his objections to the deliveries in January, but even in the best-case scenario, two F-16s and some Apaches would arrive in Iraq this fall and most not until at least next year.

American pilots aren’t part of the deal, so it will take several more months to train Iraqis to fly the F-16s and Apaches even after they are delivered. The U.S. has sent 75 Hellfire missiles to Iraq, but the Times reported the Iraqi military has only two aircraft capable of firing them.

Last week, Maliki complained publicly about the slowness of the delivery of the U.S. aircraft, saying he regretted not buying military hardware from other countries, such as Russia.

“I’ll be frank and say that we were deluded when we signed the contract [with the U.S.],” al-Maliki said June 26. “We should have sought to buy other jet fighters like British, French and Russian to secure the air cover for our forces… If we had air cover, we would have averted what had happened.”

The senior congressional aide said that there was really no way the U.S. jets and helicopters would have been ready for use in Iraq, even if there hadn’t been approval delays on Capitol Hill. The procurement and delivery processes are lengthy and the Iraqi government has been slow on finalizing the transfer deal, the aide said.

“When Maliki is complaining that we are not delivering, that’s totally misinformed,” the aide said. “The notion that somehow we could have expedited this and Iraq would have trained pilots to fly them by now is not credible.”